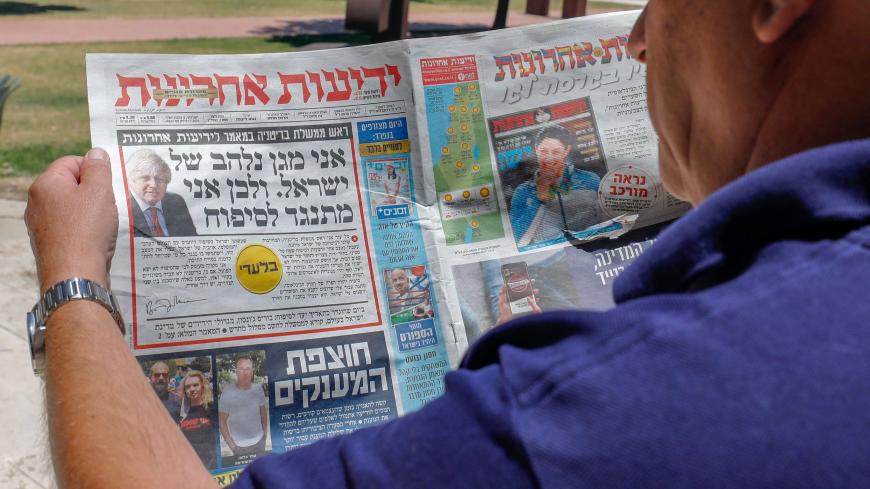 The front page of Israel's Yedioth Ahronoth features an interview with British Prime Minister Boris Johnson, reading in Hebrew: "I am passionate defender of Israel that's why I oppose the annexation," in Jerusalem on July 1, 2020. - AHMAD GHARABLI/AFP via Getty Images

A comedian sits in a Tel Aviv cafe, a huge gift-wrapped package on the table in front of him. “I’ve been asked to bring you a gift. Looks good, doesn’t it?” beloved thespian Dov Navon asks the camera. “This was given by the bigmouth American to a friend of his in Israel, who knows a thing or two about presents.” The bigmouth is obviously President Donald Trump and his friend is Prime Minister Benjamin Netanyahu. The background music evokes gaiety and innocence, but when Navon opens the package it blows up in his face, leaving his shocked face blackened by smoke. The bit ends with the message, “Annexation is a gift that will blow up in our face.” On its first day, the viral video logged over 100,000 views, becoming a hot news item. Its credits directed viewers to the sponsor the Geneva Initiative, an organization established 20 years ago to advance the vision of two states for two people.

Ahead of the July 1 target date for the start of Israeli annexation of West Bank territory, the group choose a shocking message for its campaign to win over Israeli public opinion. It succeeded beyond all expectations. Representatives of the political right railed against what they described as a leftist organization’s cynical exploitation of the national trauma of suicide bombings in major city cafes during the second intifada.

“The left presents: The peace process that blew up in our face in cafes,” Knesset member and former Transportation Minister Bezalel Smotrich of right-wing Yamina tweeted in a cutting response. “We have not seen such a display of self-awareness in a long time.”

Smotrich was giving voice to Israeli fury at the terror attacks that took the lives of over 1,000 Israelis just after the Camp David summit 20 years ago at which then-Prime Minister Ehud Barak presented then-PLO chief Yasser Arafat with a generous proposal diving the land between the two peoples.

The Geneva Initiative foresaw the response but wanted to generate a public debate on the two-state vision and restore the issue to the agenda after years of public indifference to the peace process. The looming annexation has sparked an awakening of civil society groups on the left, achieving a surprising measure of success after long years of mostly fruitless campaigns.

Zulat, a recently created human rights think tank led by former Knesset member and Meretz chair Zehava Gal-On, one of the leading voices and most familiar faces of the Israeli left, sponsored another campaign that is making the rounds. On June 25, the institute issued a wide-ranging report, “The Laundry,” arguing that Netanyahu and his allies use laundered terminology to conceal from the Israeli public that the annexation is government-sanctioned apartheid.

The 25-page document argues that the prime minister is carrying out a complex move in cooperation with media and political stakeholders to whitewash the annexation and hide its potential implications for Israel and its democratic character. The report, issued on the eve of what could have been the annexation date, got the reaction Gal-On hoped for, sparking emotional discussions in the media and in political forums and going viral on social media.

The report provides an exposé of the whitewashing methods and an in-depth analysis of their repercussions for Israel. It points to how the term “implementing Israel’s sovereignty” has taken root in mainstream media and the political system to hide that the planned move imposes essentially an apartheid regime in the West Bank, threatening Israel’s status as a democracy. Tracking media mentions, the report’s authors found an increase of 3,425% in the use of the term “implementing sovereignty” from December 2019 to January 2020, whereas mention of “apartheid” remained largely unchanged and even declined in some media outlets.

Gal-On is pleased with the result of her institute’s maiden project. “We have managed to show how within less than a decade, annexation of [West Bank] territories, which was once a concept advocated by the loony fringes of Israeli society, has become declared government policy,” Gal-On told Al-Monitor. “This move could have repercussions ranging from escalation of violence and all the way to the anchoring of apartheid policy in Israeli law. Nonetheless, the right has mounted a successful, calculated, long-term campaign to wrap territorial annexation in rustling pink cellophane and market it to the Israeli public as a legitimate, reasonable and almost necessary step.”

Other bodies on the political left have also been spurred into action in the international arena in bids to undermine annexation. One of these, an ad hoc coalition calling itself “The Israeli Peace Parliament,” includes 25 former Knesset members.

On June 25, the majority of the US House Democratic Caucus signed an open letter opposing unilateral annexation. The letter was apparently instigated by members of the "Israeli Peace Parliament,” who appealed to the US lawmakers in an urgent letter expressing concern that the impending move would be detrimental to Israel’s security, democracy, Palestinian rights and regional stability.

These latest achievements have given Israel’s leftist organizations a badly needed tailwind, proving that their activity has been effective in throwing cold water on annexation both in the domestic arena and vis-à-vis the US administration.

The efforts of these groups have exposed weakness and irrelevance among the established political parties represented in the current Knesset. In that sense, civil society has stepped into the vacuum and mounted an effective offensive. For the first time in years, the political left has stirred up significant debate and raised substantive issues beyond the personal battle against Netanyahu. It has finally managed to challenge the ideological right.