Can Europe take over if US fails Israeli-Palestinian negotiations?

Israeli extreme-right politicians slandered European Parliament President Martin Schulz for his speech at the Knesset, ignoring European contributions in general and those of Germany in particular to Israel's well-being. 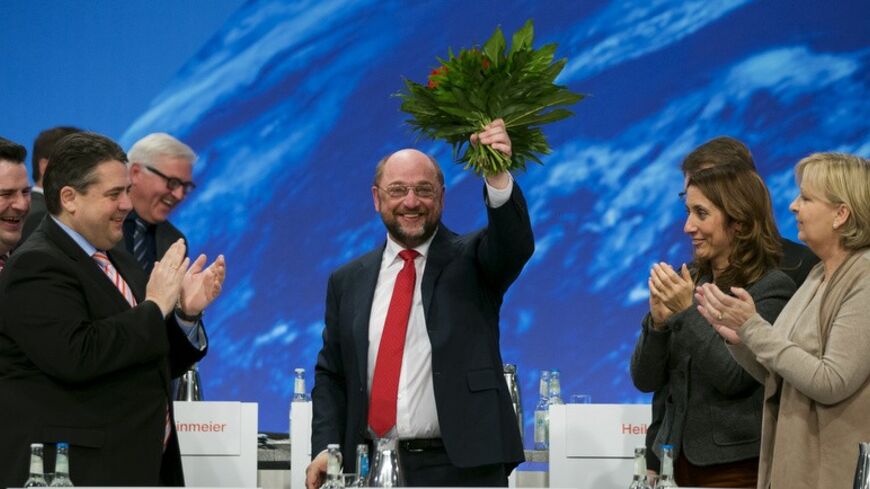 On Feb. 12, I looked at the bearded face of the European Parliament's president, Martin Schulz, as right-wing Knesset members, led by ministers of the HaBayit HaYehudi Party, competed with each other in hurling insults at the German guest. I wondered what was going through the mind of the man, who heads the biggest multinational parliament in the world — the second in the world (after India) in terms of the size of the population it represents — upon hearing a Jewish member of Knesset accuse him of supporting “those who incite toward the destruction of Jews.”

What does the senior politician think of Jewish representatives who refuse to recognize the suffering of another people? What does the representative of the German Social Democrats (SPD), who may be elected this year as president of the European Commission — the executive arm of the European Union that initiates most of its laws — think about the extent of the rationality of some Israeli decision-makers?

One can assume that Schulz knows that Germany is the only country in the European leadership that has not adhered to the Feb. 22, 2013, request of the European High Representative for Foreign Affairs and Security Policy Catherine Ashton, to fully implement the European legislation regarding the labeling of products made in the settlements. Germany’s foreign minister did not add his signature to those of his colleagues from France, Great Britain, Spain and 10 additional European foreign ministers, who wrote to Ashton in April 2013 that they had decided it was time to label settlement products to ensure that the consumers in their countries “are not being misled by false information.”

The right-wing representatives in the Knesset treated Schulz to a demonstration of disrespect for the Holocaust. They were not moved by the guest’s confession that it was the crimes of the Nazis that motivated him to go into politics, and that he bears responsibility in the name of his people and his country for the unforgivable suffering caused to the Jewish people. What does Economy and Trade Minister Naftali Bennett care about the statement of the senior European that “Iran must not have nuclear weapons”? What does the settler Knesset member Motti Yogev care about Schulz’s public disavowal of an economic boycott of Israel and his commitment that “the European Union will always stand at the side of the State of Israel”?

Be advised, Chancellor Angela Merkel, who arrives Feb. 24 on a goodwill visit to Israel, and beware. This is what we do to anyone who dares doubt the enlightenment of the Israeli occupation in the West Bank and to anyone criticizing — “and in Germany, yet,” according to the denunciation issued by the Habayit HaYehudi faction — the humane blockade of the Gaza Strip. Someone should remind them that Theodor Herzl wrote Altneuland in German, and even proposed coexistence and full equality for the Arabs in that groundbreaking Zionist book.

A day before the right-wing’s horror show, the visitor from Brussels had an opportunity to size up some very different Israelis. At a private dinner, Schulz heard from six Israelis things that, had he dared say even some of them, the entire Knesset guard would not have sufficed to get him safely out of the plenary.

Since the dinner guests, among them yours truly, undertook to abide by the Chatham House rules — in other words not to name the speakers — Al-Monitor is unable to attribute the following remarks.

This is the essence of what Schulz heard from one participant, a leading Israeli economist, who is identified with the moderate Zionist center, regarding the issue of an anti-Israel boycott. “I am very concerned by the growing voices in Europe calling for a boycott of Israel, including an academic boycott,” the economics professor said. “I am firmly opposed to sanctions against Israel, but by the same token, I support a boycott of the settlements.” To my surprise, the professor complained about the fact that too many European states avoid labeling settlement products.

The look on the faces of the other Israelis — a Knesset member from the mainstream of the Labor Party, two former Meretz Knesset members and a well-known peace activist — indicated that they, too, were amazed. Nonetheless, none of them protested against the words of the senior economist.

He further added that being quite intimately familiar with Israeli prime ministers, he was under the impression that unlike late Prime Ministers Yitzhak Rabin and Ariel Sharon, Benjamin Netanyahu was not “a courageous man.” Schulz could infer from this, among other things, that Netanyahu will not be indifferent to European pressure to freeze the settlements and to thaw his rigid positions regarding an arrangement with the Palestinians.

All the guests agreed that Netanyahu had understood that the two-state solution is a distinct Israeli interest. They all agreed with the Labor Knesset member who said that Netanyahu was facing several Rubicons: his own mistrust of the Arabs, the right-wing family members and advisers around him, the large group of Likud hawks and his difficult coalition partners. Schulz had an opportunity to see up-close the damage inflicted by the latter.

The dinner in Jerusalem, like the meetings he held that same morning with the Palestinian leadership in the West Bank, taught the senior European statesman that on both sides, expectations of the US peace initiatives are nearing rock bottom. He heard that US President Barack Obama had made clear that if Secretary of State John Kerry comes home empty-handed, the White House will wash its hands of the attempt to resolve the Israeli-Palestinian conflict.

Schulz also heard reservations about the reservation mechanism proposed by Kerry to prevent domestic political crises for both sides. “After the leaders place their reservations on the table and they become public,” one of the participants said, “they will have a hard time, if not an impossible time, backing away from them.”

Nonetheless, the Americans do not have an alternative plan up their sleeve in case negotiations on a permanent agreement fail. All that’s left is to hope that Europe, which until now made do with the job of the maligned cashier, will step into the vacuum before the Israeli-Arab rejectionist front jumps in; that the European Union will get up its courage to swim against the strong current that rides on past disasters and take a stand by the side of those struggling to prevent the disasters of the future.