Were Iraqis really better off under Saddam?

Iraq's current security chaos appears to be inspiring a bit of nostalgia for Saddam Hussein’s days, though it is unclear who, exactly, is reminiscing. 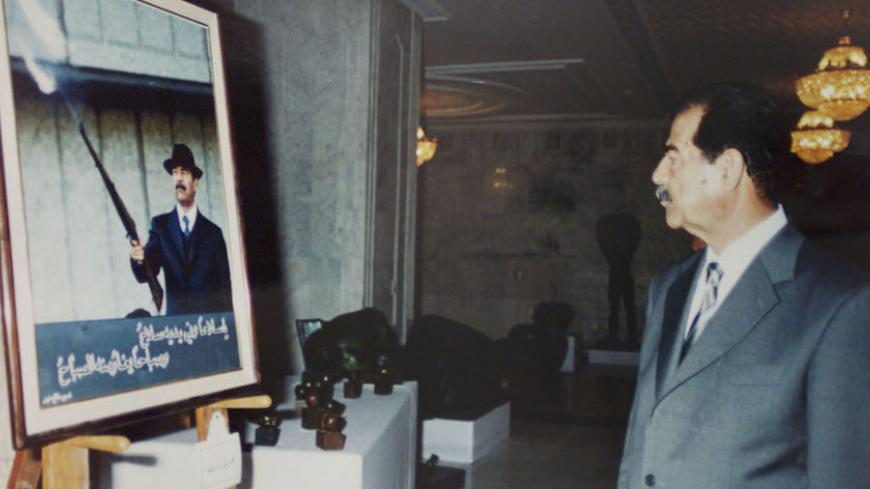 Iraqi President Saddam Hussein admires a photograph of himself during an exhibition of gifts on June 2001. The photograph was presented to him for his birthday on April 28, 2001, by the Iraqi Information Ministry. - REUTERS

BAGHDAD — The Baath regime led by former Iraqi President Saddam Hussein collapsed in September 2003 in the wake of the US invasion. Iraq has been uneasy ever since and has yet to recover. Every now and then, voices are heard measuring the current security chaos against the relative stability of Saddam’s rule (1979-2003).

But whose voices are they, really?

Saddam is remembered amid Iraq's current state of the deteriorating political, security and economic situation. Citizens, cultural and political elites, and active politicians have compared post-Saddam governments to his regime.

In a Jan. 25 interview conducted with Asharq Al-Awsat, former Iraqi Vice President Ayad Allawi (2014-15) said, “Iraqis are nostalgic for Saddam’s days,” in a reference to the worsening situation in the country and the political rift.

That statement might seem hasty, but amid the heated political environment, it fuels tension and leads to finger-pointing. We have often heard that Saddam’s men or the Baathists are the ones making the comparison. Many Iraqi media outlets, such as Al-Masalah website, noted that Allawi’s statement has “dubious" motives and that Allawi is paving the way for the return of the Baath Party. Parliament members discussed Feb. 8 a decision to ban the Baath Party; however, this matter has yet to be settled.

Under current political pressure, Shiites who believed they were persecuted in Saddam’s days seem to be re-evaluating the status quo and wishing those days would return. In a statement published Aug. 28 in Al-Quds Al-Arabi, Iraqi citizen and former prisoner Khalaf Jawad al-Assadi said, “I wish Saddam would come out of his grave to rule Iraq again. I am one of the political prisoners who was arrested in 1988, but life was better in Saddam’s days, compared with now.”

Even Kurds who were displaced and shelled with chemical weapons in Saddam’s days have said as much. Kurdish journalist Shirzad Shikhani wrote in a Feb. 2 article, “Due to the bad performance of Kurdish parties and their disputes, Kurds actually miss Saddam’s days.”

Are the tense political conditions, lack of security, corruption and absence of services under the current political rule enough to make Iraqis miss an era that was marked by dictatorship, drove Iraq into three wars over decades and claimed the lives of millions of Iraqis while wounding others?

In fact, people can be heard expressing such opinions over Iraqi satellite channels, according to writer and media figure Tariq al-Haris, who left Iraq to escape Saddam’s persecution and settled in Australia in 1998, where he heads the Iraqi Cultural Association in Australia.

“It is a shame to miss a bloody dictatorship where citizens lived in misery,” he said in a meeting with Al-Monitor.

Some people, however, believe that those missing Saddam’s days are either Baathists or longtime advocates of Saddam.

Novelist and physician Salama al-Salhy told Al-Monitor, “Many people feel nostalgic for Saddam because during his era, the state was strong and the democratic experience post-2003 in Iraq failed to fulfill its sought-after goals for change.”

Kareem Hammadi, director of Al-Iraqiya satellite channel, which is affiliated with the Iraqi Media Network, told Al-Monitor he doubts the supposed nostalgia. Hammadi wonders if people missing Saddam’s days also miss Saddam’s Fedayeen — masked men hired to crack down on and kill his opponents — or the "special tribunals, intelligence dungeons, amputation of tongues and hands, and dishonoring people.”

He added, “Calling for the return of Saddam’s days is equivalent to taking the country back to international isolation and Baathist wars. … There are only a few people missing Saddam’s days.”

Saad al-Yasiri, a Shiite scholar from Hilla in Babil province, said he is surprised some people are actually lauding Saddam’s era. “Saddam executed four of my brothers in 1993 on the grounds that they were affiliated with an opposition Shiite party. There are hundreds of Iraqis whose children, siblings or relatives Saddam executed,” he told Al-Monitor. "The political and security problems in Iraq now stem from the Baath Party’s men and the remnants of Saddam’s regime, many of whom joined the Islamic State.”

He added, “I am not shocked when I hear non-Iraqi Arabs praising Saddam’s days, but it is weird to hear some Iraqis doing so."

Saddam and his regime garnered wide public support in neighboring Arab countries such as Jordan and Morocco, as they believed Saddam was a national hero seeking to liberate Palestine.

Journalist Qasim Mozan dismissed that belief and said in an interview with Al-Monitor, “Saddam’s regime did not end completely after 2003. It was present in some behaviors and methods. The terrorist gangs affiliated with Baath remnants were among the reasons behind the post-2003 security chaos.”

According to Mozan, this suggests that Saddam’s followers are still behind Iraq’s instability today.

But to claim that Saddam’s remnants bear the entire responsibility for deterioration of the political and security situation in Iraq is not quite convincing for many people suffering under the current conditions who believe that if Saddam were still president, Iraq would be much stronger and more united — despite the bloody acts and human rights violations during his rule.