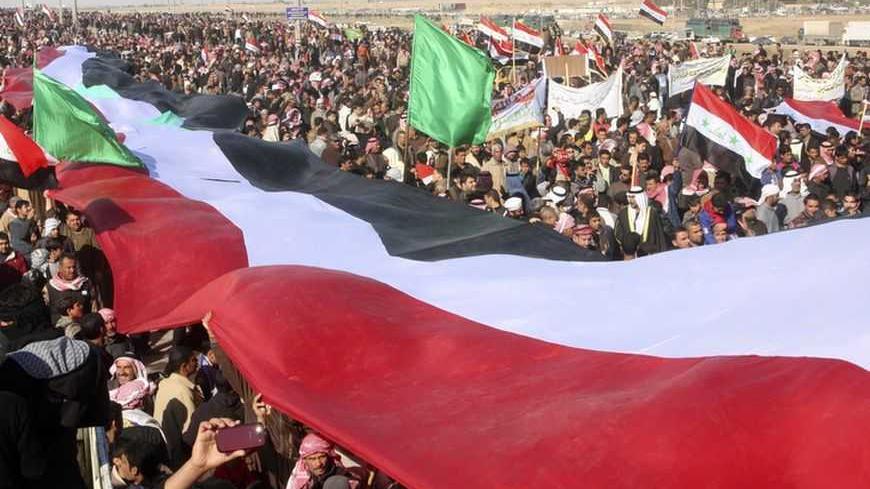 As Egyptians return to Tahrir Square to protest against their president’s attempt to hijack their revolution, which had originally swept him into power, Iraqi civilian activist circles are all asking the same question: What is preventing similar civilian activism from taking place in Iraq?

The answers are varied and conflicting when attempting to explain the differences between the environments in Baghdad and Cairo. However the debate inevitably leads to a review of the Iraqi civilian movement’s activities since 2003.

In 2004, the scene was more optimistic. Widespread announcements were declaring the establishment of trade unions, professional associations and small groupings of civilian associations. This represented a new chapter for civilian movements, compared to the days of Saddam Hussein when they were nothing but hollow fronts. Iraqis soon became accustomed to the sight of activist groups taking to the streets for spontaneous demonstrations and civilian causes. They had never witnessed such things previously, unless of course state powers were behind them.

Yet, the relative rise of the civilian movement in Iraq was not to last long. Islamist parties were taking preparatory measures to dominate the street, and suddenly the tack of events took a qualitative shift. The civilian movement suffered its first setback of many when in July 2005, a spree of assassinations suggested a pattern of targeted killings, despite the fact that the assassins were locked in a sectarian battle. In the city of Hiit, located in the Anbar province in western Iraq, residents found the stab-wound-riddled body of an Anbar University student who had been an activist in the student union in Baghdad. His family said that an armed group of Sunnis had previously threatened him and demanded that he stop his activities and promote their group in the city's mosques.

In September of the same year, police also found the decapitated body of a 50-year-old worker. He had been the president of the trade unions in Baghdad and was well-known for mobilizing workers to demand new labor legislation to replace the defunct laws leftover from the Baath era. Police investigations failed to find the culprits, but his union colleagues and family believe that a Shiite militia murdered him after having demanded that he stop his "communist activities." As violence increased, the presence of a civilian movement declined, leaving a void that others like them would not fill.

As the streets descended into civil war, a sharp polarization formed between the religious forces, some of which possessed sophisticated weaponry, and the liberal groups who were trying to establish themselves and confront severe difficulties. The outburst of religious fanaticism among large swaths of the Iraqi population tipped the scales; they preferred to oust the best of Saddam Hussein's secular opponents in favor of supporting Sunni and Shiite Islamists. From this context emerged the Iraqi National List led by Ayad Allawi.

Before the first legislative elections in Iraq in 2005, the headquarters of the National Accord Movement were industriously canvassing and many Iraqi journalists were hard at work crafting political messaging for Allawi. They seemed to take a two-pronged approach: Allawi would be their stage man, and the Iraqi List would be the symbol of the Iraqi civilian current. Allawi’s charisma made him a media favorite and was highly effective on the stump. Later on, it became all too apparent that there was nothing behind the charisma.

The coming days revealed that this political project would not deliver on what it had promised, mainly due to Allawi’s lack of patience and foresight. His politicking allowed the other side of the political spectrum to cultivate its influence and broaden its fanatical base. In contrast the liberal front and the civilian movement ebbed along.

The day Allawi came forth with his Iraqi List — which was a mixture of communists, liberals, nationalists, Baathists and others who opposed a theocratic state — he presented himself as the secularist leader. Several years after, he is finding it very difficult to find a political niche he can fill.

Allawi chose to abandon his promised platform and quickly waded into complex power struggles which were neither secular nor religious in nature. Safia al-Suhail, an independent member of parliament, announced she was leaving Allawi's bloc, stating: “Continuing with the Iraqi List is difficult. It has deviated from its goals and no longer fights for the establishment of a secular-civilian state.” Suhail was not alone; the Communist Party split from the Iraqi List as well.

Many in Iraq have come to realize that everything Allawi says is purely political messaging that serves no purpose other than to further him in his quest for a position of power, and he has worked doggedly in achieving this goal. He is still haunted by the notion that the position of the prime minister was stolen from him, a feeling which still dictates his political maneuvering to this day. He has forgotten about the civilian state, and his political prowess became limited to merely securing a leadership position for himself within a state institution.

Moreover, no one has heard Allawi, the purported leader of those who desire the establishment of a secularist state, use the term “secular” in political discourse for a long time, at least not since his controversial loss in the 2010 elections.

Before this round of elections, Allawi delivered the coup de grâce to the secular identity of his list. It has become a homogeneous mixture of groups incompatible with supporting a secular system. It consists mainly of Arab nationalist movements and Sunni religious factions, as well as Shiite groups fed up with the new regime.

Thus things became very desperate within this coalition. Allawi is no longer capable of achieving his slogan: a civilian state. He stands atop a highly-fractious bloc, and his political feet are not as nimble as they used to be as he searches for a foothold.

Those who have split with him — including the Iraqi Communist Party, which won two seats and a minister position in the first legislative elections, members of parliament Safia al-Suhail and Mahdi al-Hafez, and others — are finding their way through the new Iraq’s political labyrinth whose corridors are determined in the backrooms of the religious parties’ headquarters. The Communist Party, for example, tried in vain to make headway with those whom they had lost to radical Shiite parties such as the Sadrist Movement, which enjoys popularity among the poor, by moving their primary headquarter to Andalus Square in central Baghdad. Here the communists hang banners for the Day of Ashoura, which is the Shiite day of mourning for the death of Imam Hussein.

The rituals surrounding this event have taken on cultural and social significance and are protected by the constitution and the Shiite parties in power. As for Suhail, she has joined the State of Law Coalition headed by Shiite Prime Minister Nouri al-Maliki. On the eve of the 2010 elections, it presented itself as a transient political coalition of various sects which represented — as the slogan went — an institutional Iraq. Suhail felt that she was watching from the sidelines, and that the platform was nothing but election propaganda, saying, "My stance is a liberal-secularist one, meanwhile the state draws closer to imposing Islamic law. ... I'm not an Islamist, with all due respect to the Islamists." Later, Suhail justified her participation in State of Law Coalition by saying, "It is difficult to obtain representation in parliament without any leverage."

Ultimately, she joined Allawi’s Sunni-dominated list, which is secularist only in name. The Shiite national alliance meanwhile has made a habit of co-opting secularist Shiites before elections, and marginalizing them after elections.

During the 2005 parliamentary elections, from which a broad-based and highly-polarized Shiite bloc emerged, it was common knowledge that it enjoyed Sistani’s blessing. Its canvassing blanketed the country with coalition posters which bore a picture of Sistani.

It was said that some Iraqis, especially in the countryside, voted in favor of the list under the impression that Sistani was a candidate; a shining example of the decrepit state of political awareness in Iraq.

It was later announced that Sistani did not support or favor a specific list. However, public discourse has been preoccupied by the question put forth by researchers and observers: Why did he not publicly refute the assertion that it supported the 555 List?

Five years after the fact in the summer of 2010, Sistani released an unequivocal fatwa which stated, "The religious authority confirms that it is not affiliated with any organization involved in the elections, and stresses the need to choose those who are most committed to the stability of Iraq.”

After nine years of political turmoil, Iraqis blame the sectarian blocs for the country’s severe polarization. They believe that political priority is not being given to the vital issues necessary for stability. Instead, the contaminant of division has moved to the streets and the masses take to the trenches following behind different personalities.

It cannot be overlooked that Sistani was moderate in both his stance and language in his public declarations which his followers disseminated across the country.

Iraqis remember his fatwa to resist the U.S. army peacefully, and his other fatwa which urged his followers to participate in the elections.

The day demonstrations erupted across the country, with its epicenter in Liberation Square in central Baghdad, the atmosphere was uncertain for everyone involved. The media machine filled the air with rumors and hearsay, at one point claiming that the young demonstrators were remnants of the Baath Party, and at others claiming that they were fighting a proxy war against Prime Minister Maliki on behalf of his opponents.

In a statement released by Sistani’s office a day after the demonstrations on Feb. 25, 2011, he commented on post-2003 events in a manner that was more down to earth than the country's political elite, stating, "Sistani greatly appreciates those Iraqis who participated in the demonstrations. ... The government and the house of representatives must provide services to Iraqis. ... Before this can be done, privileges for officials, current and former MPs, and those with special rank must cease and corruption must end in this country."

This statement conflicted with other fatwas issued by other Iraqi Shiite clerics on the eve of the demonstrations. The semi-official satellite channel Al-Iraqiya was preoccupied with the “viciousness” of the protesters and their "subversive" goals! In the same statement, the broadcaster angrily stated, "The religious authority tells of bad consequences if the management of the state’s affairs continues as it has."

Liberation Square was buried that day. Nothing which Sistani warned against has changed. He shut his door in the face of Iraqi politicians who vie for political power. Sistani’s isolation implies he is devoting more time to Sufi practices, while the political elite isolate themselves in a grinding battle for political influence.

This shows that Sistani is a cleric fit for a secularist state, for his actions as a religious authority in these disoriented times are balanced and moderate. He quietly and peacefully defies his colleagues by keeping state and religion separate. It is certain that Sistani prefers separation of religion and state, since his position in this regard has been a critical factor in the struggle for religious authority in Najaf.

Today, with the approach of provincial elections, secularists can be likened to a defeated warrior who needs time to rest and treat his wounds. Meanwhile, better organized and quick to mobilize, the Islamists continue to exert their control over the new Iraq.