Among Iranian Reformists, hope goes hand in hand with pragmatism

How do Iranian Reformists see the future of their country — including the prospect of change — in the aftermath of the nuclear deal? 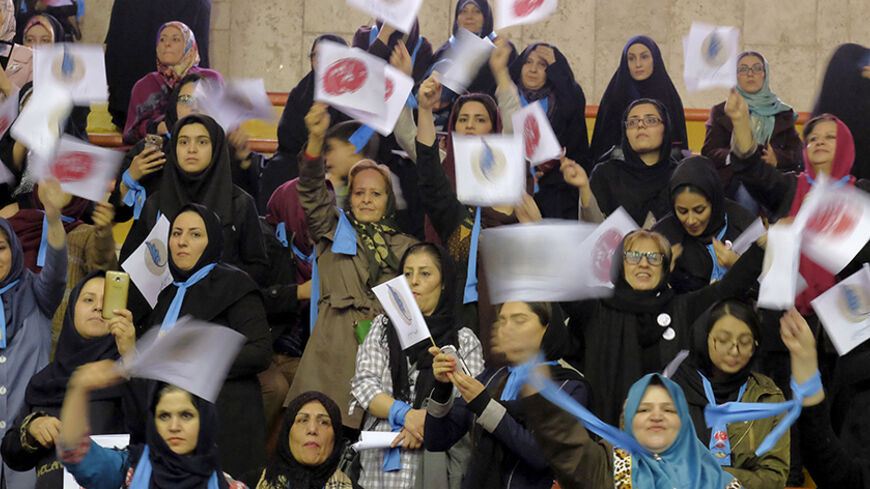 QOM, Iran — From the look on his face, the security officer at Imam Khomeini International Airport seemed surprised that most arrivals weren’t Iranian. A long queue stretched to the one passport control counter reserved for foreigners, while the other five counters dedicated to Iranians were largely deserted. Eventually, one of the five counters was opened to foreigners. Iran appears to be opening up more quickly than the government anticipated.

From the airport, Al-Monitor’s columnist got a cab straight to the holy city of Qom, about 140 kilometers (87 miles) south of Tehran. Halfway there, a vast military area suddenly appeared. It was surrounded by barbed wire that extended over several kilometers and was punctuated by security checkpoints. The driver explained that it was the Fordo nuclear facility. “Iran has managed to keep this facility in operation. This is a symbol of Tehran’s victory in the tough international tug of war with the West, ongoing for years now,” he told Al-Monitor.

At first glance, Qom appears to be the Vatican City of Shiites to the first-time visitor. There are countless mosques, and various sermons simultaneously echo from different pulpits. In the main street, leading to Lady Fatima Masuma Shrine — one of the largest Shiite shrines in Iran — it seemed as if clerics were holding a massive protest. Hundreds of clerics wearing black and white turbans paced the streets and sidewalks while carrying their laptops, books and files. When asked about the crowd, Al-Monitor’s guide and translator explained that we were approaching the Shiite seminary — the most prominent in the world, besides that in Najaf in Iraq. The guide, a seminary student himself, told Al-Monitor that this seminary hosts around 45,000 clerics, including students, teachers and senior clerics.

At an office near the seminary, Al-Monitor met with a group of university lecturers who agreed to be interviewed on the condition that their full names, and the names of their universities, not be disclosed.

Mohammad, a political science and international relations professor, was not really interested in Al-Monitor’s questions about Shiism, religious authorities and traditions. Instead, as soon as the subject of Iran after the nuclear deal arose, he immediately said that his country “took too long to sign that deal. It could have done so 10 years ago at least. But former Iranian President Mahmoud Ahmadinejad prevented this, which cost the country and pushed it to pay a useless price.” His colleague, Mostafa, a professor of Islamic studies, told Al-Monitor, “Iran gained nothing from those strict policies. Instead, it suffered an economic blockade that made it regress for long years.” He added, “When Iranians visit Turkey, they realize the vast difference in prosperity and development. Iran is currently trying to recover from the losses it suffered.”

Indeed, the burden appears heavy. Hassan, an economics professor, told Al-Monitor, “There are around 8 million unemployed people in Iran … which means that 10% of the population has no source of income. This is not a negligible figure, especially as 65,000 of the unemployed hold doctorates in various disciplines.” Hassan added, “People paid the price for an ideological stance and wrong political priorities. For years, we have been asking our officials to reach an understanding with Washington to solve the local and regional problems. We would tell them how unreasonable it is to support parties outside Iran with money and supplies, while some Iranian regions have not been reconstructed following the damage caused by the Iran-Iraq War in the 1980s.”

When asked about whether they support the Reformist movement, all agreed that the overwhelming majority of Iranians want reform. Ali, a researcher at a private institute for public policy research based in Qom, explained why this support is not reflected at the ballot box. He told Al-Monitor, "Each time Iranians were given the chance to express their opinion, they showed that they want reform. This is why they elected Mohammad Khatami as president in 1997. This is why they took to the streets in 2009, and this is why they elected current president Hassan Rouhani.”

Will this support for reform appear in the Feb. 26 parliamentary and Assembly of Experts elections? Ahmed, a history lecturer specializing in the history of Islamist groups in Russia and the former Soviet Union, told Al-Monitor, “It is unlikely this time. The leaders of the Reformist movement are either intentionally or forcibly absent. Hard-liners are trying to prevent Reformists from benefiting from Iran’s openness to the West. We do not expect any result from the [upcoming] elections. There are no more Reformist candidates. The overwhelming majority of Reformist candidates in the parliamentary elections were disqualified. Only 50 Reformist candidates were approved out of over 3,000. This means that the election will be a mock election. Even if all of the approved Reformist candidates win, they will not have any weight in the 290-seat parliament.”

Does this mean that the Reformists have lost any hope for change? Al-Monitor’s interlocutors quickly rebutted this assumption. They said they believe change is bound to happen, even if it currently appears unlikely.

One of the university lecturers told Al-Monitor, “All Iranian state television channels are commemorating the 37th anniversary of the Islamic Revolution. For 10 consecutive days, from Feb. 1 to Feb. 10, all programs are replaced by songs and documentaries about the revolution. But who is watching? No one. Even former President [Ali Akbar Hashemi] Rafsanjani publicly said that he does not watch state television channels, just like the majority of Iranians. We have been celebrating the revolution for 37 years; now the time has come to build a state. Inevitably, this must be done peacefully and through elections. If this does not happen in these elections, then it is bound to happen in the next ones.”

As Iran marks the 37th anniversary of its Islamic Revolution, it is evident to the foreign observer that a significant portion of Iranians have had enough with talk about the revolution. These people are longing to build a modern and democratic state, but are realistic and pragmatic enough to realize that the change they seek cannot happen through a counter-revolution. Instead, it appears that there is belief that change has to happen gradually — and that it might take time. If anything, Iranians appear torn between their inclination to progress and their discomfort with change. This struggle is left to be settled on account of the maneuverings of a wide country with a large society, situated in a region ravaged by war.