The Iranian government's decision to close religious shrines in Qom, Mashhad and Greater Tehran to combat the spread of COVID-19 has caused an outcry among some who oppose the move for reasons of tradition or religion. 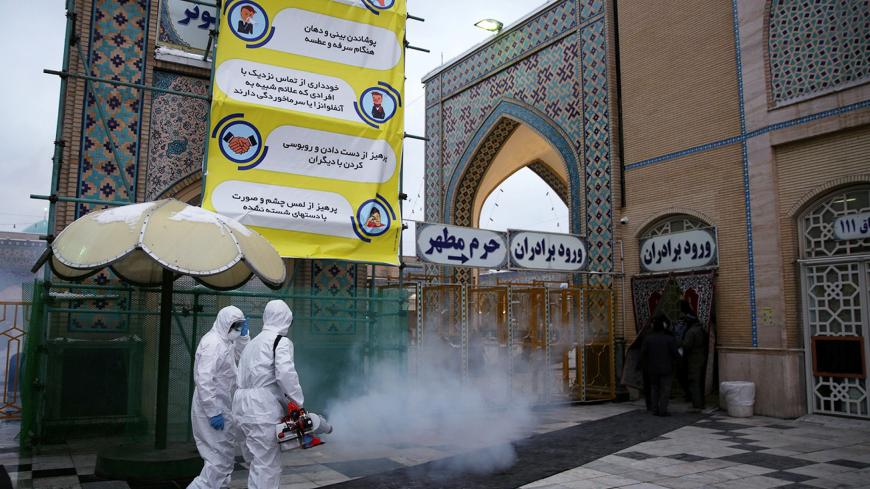 Religious sites in Iran have never before been closed — even during the war with Iraq — yet with the spread of the novel coronavirus across the country, infecting tens of thousands and killing hundreds every week, things have changed. The decision by Iran’s Interior Ministry to close all the shrines in Qom, Mashhad and Tehran has stirred mixed feelings among Iranians, assuring some while infuriating others.

To some Iranians, the closure of the shrines is a grim act that will never be forgotten. The spiritual attachment Iranians have with Ali ibn Musa al-Reza, the eighth Shiite imam buried in Mashhad, and his sister Fatima Masuma, whose tomb is in Qom, goes beyond religiosity. This bond is part of a culture that has been engraved in the Iranian collective identity — and perhaps that’s one of the reasons why a decision to close these places took time to be adopted.

But Qom became the epicenter of Iran's coronavirus problem as in the beginning pilgrims were encouraged to keep coming to Qom,

A decision to close shrines — and likewise one to lock down cities — has presented a challenge to the government of President Hassan Rouhani, who has been under tenacious pressure to plow ahead with measures to stem the spread of COVID-19. He had economic concerns when it comes to locking down cities, as closed businesses would mean a mass economic crash that could complicate efforts to combat the coronavirus, which had killed 1,685 in the country as of March 22.

Iranian journalist Siavash Fallahpour told Al-Monitor that Rouhani’s decision not to close businesses and cities is due to the situation Iran is facing under sanctions. “Close cities and businesses while you are under sanctions and these businesses will fall; this will mean more pressure on the government that then will not even be able to pour money into the fight against the spreading virus,” he said.

But closing cities and locking down the country isn’t as sensitive as the closing of shrines in a country where relations between the general public and rituals have greater cultural than religious importance. Visits to the shrines are not limited to the strongly religious; Iranians of all stripes flock to holy cities in Mashhad, Qom and Ray in Greater Tehran to get the traditional blessings of Imam Reza, Hazrat Masuma and Shah Abdul Azim, or dozens of imamzadehs (sons of imams) whose shrines are scattered throughout the capital and other cities. Some Iranians visit during vacations or on religious anniversaries, and others go to pray seeking healing from disease or seeking to become married or to be blessed with children, among other requests.

“These are predominantly devout lay Shiites who are inclined towards a relatively fundamentalist practice of the faith, being anti- or pro-Revolution is not necessarily a relevant factor in defining their collective identity,” said international relations scholar Mohammadreza Kalantari of Royal Holloway, University of London. He told Al-Monitor that practicing Shiite rituals, be they commemorating the tragedy of the battle of Karbala or taking sanctuary at holy shrines, is the defining factor of this group of believers. Kalantari said, “Intercessory prayer at Shiite holy shrines in Mashhad and Qom is a case of this ritual.” He said this forms their collective identity, and that “therefore, the closure of shrines would be perceived as a threat, hence causes contention.”

This is not only about Iran; in Iraq, too, there are similar communities that are resisting on a daily basis the decision to close the shrines. Iraq is the burial place of six of Shiite Islam’s 12 imams. And to make matters worse, March 20 marked the anniversary of the death of Imam Reza's father, the seventh imam, more than 1,200 years ago in Baghdad. Those resisting efforts to shutter shrines produced several religious chants (known as latmiyas and often accompanied with ritual chest beating) and poems attacking the concept of wearing masks while entering shrines, or the idea of closing the shrines because people might be infected while gathering inside.

Some resisted in a different way by going into the shrines and making videos of themselves having direct contact with the metal barriers around the graves, in an attempt to prove that they are confident that nothing is going to happen to them.

“The believers are concerned about their identity, especially when scientific research clashes with religion,” Haidar Hoballah, a senior teacher at the seminary in Qom and an author of several books, told Al-Monitor. Hoballah said other elements affecting the current situation include “the surge of sectarianism in the past quarter century and the prevalence of emotional sectarian ideas, the rise of religious currents, some of which are led by people with no real religious jurisprudence background and a political element linked to the problematic relation between some religious currents and the establishment in Iran.”

It’s worth mentioning that many Shiite clerical authorities in Iran and Iraq issued clear fatwas urging people to refrain from gathering and to abide by what health officials are calling for; this includes Ayatollah Ali-Sistani in Najaf, Iraq, who on March 10 suspended Friday prayers, and the Society of Seminary Teachers of Qom, which includes most of the high-ranking marjas in the city’s seminary.

So who are those resisting if the highest Shiite authorities are pushing for full abidance of health officials’ instructions?

According to reports from Iraq and Iran, many of those are followers of non-mainstream schools of thought within the Shiite community, some are followers of Iraqi cleric Muqtada al-Sadr, who openly criticized the approach adopted by Sistani and other clerical authorities. Sadr wrote March 14 on Twitter, “I’m astonished when the West and Trump are calling on people to pray tomorrow, while those in the East suspended their prayers and ziyaras (religious visits), they even closed their shrines.” (Whatever US President Donald Trump may have said earlier, on March 16 he called for gatherings of no more than 10 people.)

Among those resisting the approach are followers of Ayatollah Sadegh Shirazi, a critic of the Islamic Republic of Iran; his supporters in Iraq, mainly in Karbala, and in Iran stormed into the shrines and raised slogans against Iranian Supreme Leader Ayatollah Ali Khamenei and Rouhani's government.

Iranians often refer to followers of Shirazi as British Shiites — an insult. They are members of a group that was part of the new system introduced after the 1979 revolution; however, in early 1980s their leader, Ayatollah Mohammad Shirazi (Sadegh Shirazi's brother), started opposing the rule of the founder of the Islamic Republic, Ayatollah Ruhollah Khomeini, calling for replacing the velayat-e faqih (guidance of the jurist) doctrine, with shura al-fuqaha (the council of the jurists). The group was very influential at the beginning of the Islamic Republic and some compare its power within the state to that of the Turkish preacher, now in exile, Fethullah Gulen. The Islamic Republic has blamed the group for attacks on Iranian interests abroad

A third group is made up of pro-establishment radicals in Iran who backed off when they understood that this isn’t a decision by the Rouhani government, but rather an establishment approach that has the blessing of the supreme leader.

Kalantari said of this third group, “It’s during this sort of crisis that a couple of embedded paradoxes of political Shiism come to the fore. In recent decades, the Islamic Republic and its leadership have promoted groups of Shiite panegyrists [speakers] and encouraged their base to be atash-be-ekhtiar (free to speak out) when it comes to safeguarding the revolution and its fundamental belief.” He said that some of this group's members led protests against the closure of the shrines based on the above concept, yet “many of those who led the protest against the closure of the shrines have posted videos online and humbly apologized to the leader.”