In an interview with Al-Monitor, the youngest candidate for the Assembly of Experts talks about his motivations for running — and what matters most to him. 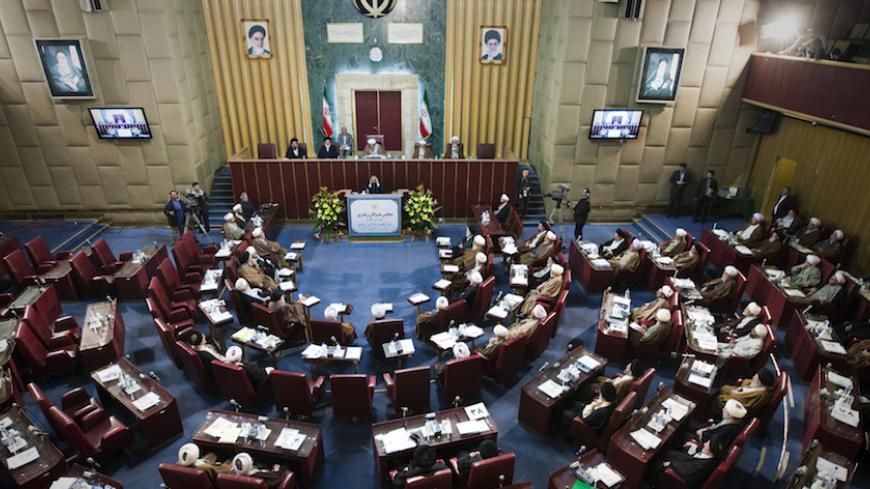 TEHRAN, Iran — He is only 25, and he’s running for the Assembly of Experts — the high-level body tasked with selecting Iran’s next supreme leader. Maysam Doost-Mohammadi may be one of the youngest clerics in Iran holding the title of mujtahid, which means he has obtained a sufficiently deep knowledge to formulate independent interpretations of Islamic law.

“When my father heard the news, he stayed silent for few minutes,” Doost-Mohammadi told Al-Monitor of his qualification by the Guardian Council, adding, “Then he smiled to me and said I’m proud that you were accepted for these elections, and that you obtained this level.” The young cleric was born in Qom, one of the holiest cities in Shiite Islam, situated some 140 kilometers (87 miles) south of Tehran. His father was a student at the seminary, where Doost-Mohammadi was introduced to the clerical community and started his studies when he was only 15.

“I submitted my candidacy to the Guardian Council, and then I was asked to attend a written exam,” he explained. “When I entered the examination room, it was a shock that everyone there was far older than me. I felt uncomfortable and a bit disturbed. Then I decided that I have to continue in order to achieve my goal because of the Revolution and to convey a message to the enemies of our Revolution: that the youth is also studying and will get older with more knowledge to preserve the line of Imam [Ruhollah] Khomeini.”

Doost-Mohammadi’s only competitor in Qom is Ayatollah Mohammad Momen — a conservative who is three times older than Doost-Mohammadi. Momen has secured the endorsement of the two main clerical bodies, while the young candidate has not. Yet Doost-Mohammadi prefers not to be on Ayatollah Ali Akbar Hashemi Rafsanjani’s rival moderate ticket. He said to Al-Monitor, “I told them I’m running independently; I respect Ayatollah Momen and the great ayatollahs backing him. Therefore, I won’t be on the other [Rafsanjani-led] list, but I’ll run to convey a message that young scholars are present and that the future is theirs.”

“I think it’s important to engage with the youth and build an infrastructure that’s ready to embrace their ambitions,” he told Al-Monitor while strolling in Tehran’s magnificent Niavaran Park in the north of the Iranian capital. “There’s a gap between the clerics and the youth. For example, in this area in Tehran, we have to talk to them and answer their questions so that we don’t lose them to Western culture.” Doost-Mohammadi believes this very issue should be high on the agenda, besides confronting what he called the “efforts of the enemies of the Revolution, who want to infiltrate [Iran] and try to harm [our] Islamic society.”

When he was told that he had passed the written exam compulsory for candidates for the Assembly of Experts, Doost-Mohammadi then had to prepare for the oral exam, which involves an interview with three of the grand ayatollahs of the Guardian Council. “I entered the room, and there were three major Islamic scholars. They started asking me questions about this and that. I had to show my knowledge and ability to analyze and arrive at conclusions of my own,” Doost-Mohammadi said. “After 30 minutes of hard questions, I was told that I have to await the results. My friends and those around me thought I was doing something illogical. They never thought that I was going to make it, but it happened. After around two weeks, I was contacted by the Guardian Council and told that I had passed [the exams] and that I’m the second candidate of Qom, the biggest clerical city.”

Beside his seminary studies, Doost-Mohammadi is also a student at the University of Tehran. “I’m a Ph.D. candidate in Islamic philosophy. Soon, I’ll get my Ph.D., after submitting my thesis,” he told Al-Monitor. “I also learned Arabic four years ago, and I read a lot about Arabic culture, issues related to Arab youth and society, and the cultural crisis the Arab world faces. I’m also interested in finding common ground between Shiites and Sunnis, because as long as we [Shiites and Sunnis] are fighting and battling [each other], enemies of our [common Islamic] nation are going to prevail.”

The Assembly of Experts is responsible mainly for the selection of a new supreme leader whenever the position is vacant. Approximately 161 candidates are contesting the assembly’s 88 seats, after the Guardian Council disqualified almost 80% of candidates who had signed up to run — including Seyyed Hassan Khomeini, a grandson of the founder of the Islamic Republic, Ayatollah Ruhollah Khomeini.

“Anyone without a previous level of Ijtihad [rank necessary to derive and deduce religious opinion from Islamic law] who submitted their candidacy without attending the exam was disqualified,” Doost-Mohammadi told Al-Monitor when asked about the Guardian Council’s disqualifications. He preferred not to mention anyone by name, but said that he believes anyone with good knowledge, strong capabilities and thorough understanding of Islamic law “should be able to pass [the exam]. This is the law here in the Islamic Republic, and everyone should abide by the law if he wants to become a candidate.” He further suggested to Al-Monitor, “There are a lot of my peers who are better than me. They are real mujtahids, but they don’t have the courage to apply for the exam, or they don’t want to now because they think it’s early.” The young cleric concluded to Al-Monitor, “I was asked by many of them, friends and colleagues, ‘How did you achieve this level of knowledge and courage to go for such an election?’ I said through my dependence on Allah, and only Allah.”