Iran reacts to Saudis' offer of troops in Syria

Iranian officials play down Saudi statements about sending ground troops to Syria, especially as the Syrian government makes gains on the ground. 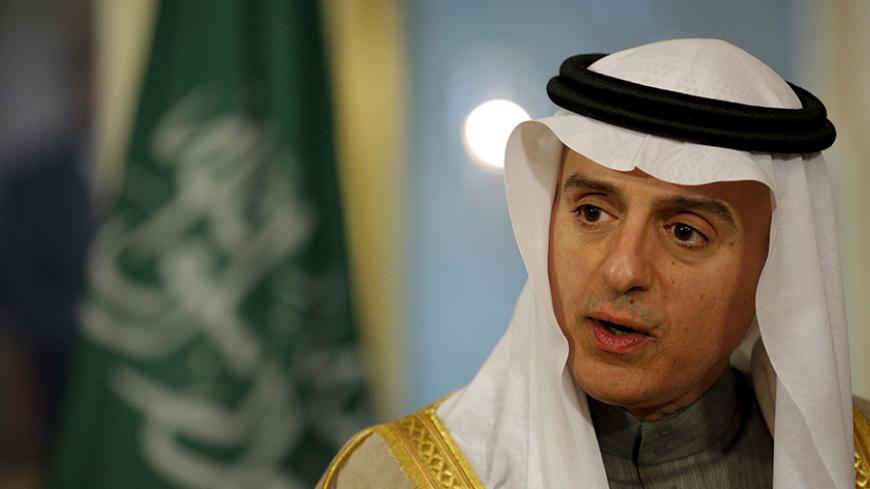 Saudi Foreign Minister Adel al-Jubeir delivers a statement after a meeting with US Secretary of State John Kerry at the State Department in Washington, Feb. 8, 2016. - REUTERS/Carlos Barria

To Iran, Saudi Arabia sending troops to Syria is “suicidal,” at least according to Islamic Revolutionary Guard Corps (IRGC) commander Mohammad Ali Jafari, who made the remark Feb. 6 at the funeral of a senior IRGC officer who was killed in Syria. Several other Iranian officials have also played down Saudi statements about an interest in contributing to the war on the Islamic State (IS) in Syria.

“It’s a joke,” said an Iranian military source who asked not to be identified in a phone interview with Al-Monitor. “We couldn't wish [for] more than that. If they can do it, then let them do it — but talking militarily, this is not easy for a country already facing defeat in another war, in Yemen, where after almost one year they have failed in achieving any real victory.”

After meeting with US Secretary of State John Kerry, Saudi Foreign Minister Adel al-Jubeir told reporters Feb. 8, "There is a discussion with regard to a ground force contingent, or a special forces contingent, to operate in Syria [under the] international US-led coalition against [IS]. … The Kingdom of Saudi Arabia has expressed its readiness to provide special forces to such operations should they occur.”

“The Saudis might really take part in this war,” suggested the Iranian military source. “Such a decision might come from the rulers of the kingdom without taking into consideration the capabilities of their troops, and here is where the tragedy would occur. They are not well-trained for such terrain. I’m not sure if they sorted out the supply routes they would use — this is assuming that they would only fight [IS] — but it’s obvious they [want to] implement their agenda, after their proxies failed.”

The source explained that after “major gains in Aleppo, northern Syria and Daraa in southern Syria, it’s clear that the Syrian government is strongly in control and all the terrorist groups are on the retreat. The Americans are aware that this is the end to their dreams in Syria — the Saudis too — so they are thinking [out] loud, but this is very dangerous for them.”

Hostility between Iran and Saudi Arabia isn’t something new, though it has been growing drastically since the start of the Syrian revolution in March 2011. Both countries have different points of view on the regime of the defiant Syrian President Bashar al-Assad. Saudi Arabia has called on Assad to step down and has financed groups fighting against him. Iran has offered maximum political and military support to Assad, which at first involved Hezbollah’s intervention in Syria, then Iraqi fighters and finally sending Iranian “military experts” who seem to be taking part in direct combat with anti-government groups, resulting in dozens of Iranian casualties.

If Saudi troops killed Iranian forces in Syria, “that would create a whole new situation for the Saudi regime,” said Mohammad Marandi, dean of Tehran University’s faculty of world studies.

“The Saud family would probably not survive for long in such a confrontation. They are destroying their economy, and they simply do not have the capability to launch another war,” Marandi said in an interview with Al-Monitor. "A Saudi intervention in Syria would be illegal according to international law, and that would be a gift to Iran and Iraq to finally punish the Saudi regime.”

On Sept. 30, Russia announced the start of its intervention in Syria “upon the Syrian government’s request.” This came after a year of the US-led coalition’s aerial intervention. Turkey started its airstrikes July 24. Four months later, Turkey downed a Russian Sukhoi Su-24, causing serious tension between the two countries and raising fears of additional implications. Now that Saudi Arabia is considering sending in ground troops, the main questions are where it plans to deploy those forces and whether it plans to have a presence in regions near Iranian troops, as this may add fuel to the fire.

“This would mean a regional war,” the Iranian military source told Al-Monitor. “Mistakes can’t be tolerated, especially with the tension mounting around the region. It’s not about Iranians, but about all troops on the ground fighting with the Syrian army. How would the Syrian army deal with a foreign country on its soil, without its permission, and maybe aiming [guns] at them? That would be an occupation force.” The source, who visits Syria frequently, added, “Can the Saudis control their army? Who can guarantee that some of them might not defect and join [IS]? They have the same ideology and they hold the same beliefs, and many of them are already connected [to IS].”

The source concluded, “The Saudis are simply putting themselves in a very weird position that might have a very dark end. The worst thing is that the implications aren’t only going to affect the region, but world peace.”