Parents and educators are concerned about Education Minister Naftali Bennett integrating values of Judaism and nationalism into the education system, at the expense of tolerance and dialogue. 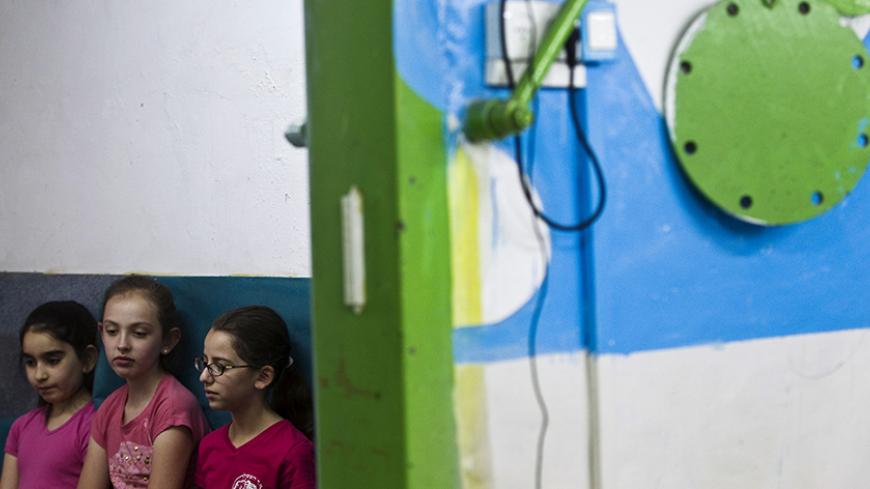 Israeli elementary school students stand near the entrance to a bomb shelter during a nationwide emergency drill simulating a rocket attack, in Jerusalem, June 2, 2015. - REUTERS/Ronen Zvulun

In recent months, it has been hard to keep up with the recurring reports on changes in the Israeli education system. It began last June with a decision by Education Minister Naftali Bennett to remove the play “A Parallel Time,” performed by the Haifa Al-Midan Theater, from the “culture basket,” the list of performances made available to schoolchildren, because it is based, so he explained, on the story of a Palestinian terrorist. His decision ran contrary to the opinion of a committee of professionals that determined that the play should go into the basket, as it did not encourage terrorism. Later, Dorit Rabinyan’s novel “Borderlife” was excluded from the advanced literature curriculum of high schools on the grounds that it encourages assimilation. What's more, the ministry ordered a freeze on funding of bodies teaching pluralistic Judaism in schools. In addition, teachers claim that the list of concepts each student of civics is required to master has been updated, with a clear preference for concepts emphasizing Jewish nationalism over those highlighting the state's democratic character.

On Feb. 17, Education Ministry officials were reportedly quoted as contending that Bennett intended to appoint a new committee on civic studies consisting for the most part of right-wingers. This follows the public uproar sparked earlier this year over the ministry’s biased revision of the high school civics textbook. While the current version has been under revision for several years now, debate on the issue becomes increasingly heated each time a new minister is appointed.

Or Kashti, education analyst for the daily Haaretz, points out that although all recent education ministers have attempted to impose their political ideas, the trend has lately become especially intensive. Kashti told Al-Monitor, “True, the religious aspect was given prominence during the days in office of former ministers Limor Livnat and Gideon Saar, as well; however, it was not done in such a coercive manner then. We have a minister here who really emphasizes national and nationalist aspects and who is really a missionary.”

On the other hand, Yoram Harpaz, a professor of education, is not as alarmed. “Ben-Zion Dinur, the education minister in 1951, was acting to foster Jewish identity, and his successors in office followed suit. However, it was no cause for public concern as the political left was standing on solid ground at the time. What's different today is the context. The political right is currently very strong, and we see processes of 'religionization' taking place in numerous areas. No wonder then that those who oppose these concepts are in a panic.” For those people, Harpaz has a reassuring message: “School plays but a minor role in children's education. Its impact on shaping them probably accounts for a mere 5%. All other agents are much more significant: home, family, the environment, TV and recreational activities.”

Zeev Degani, principal of the Herzliya Hebrew Gymnasium in Tel Aviv, told Al-Monitor, “I don't see any actual evidence on the ground of the political statements released by top-ranking officials in the ministry. However, I do hear in the media about the intention to separate those on the right and those on the other side of the political map, between the religious and secular. Educators who find such trends in line with their perceptions may yet interpret it as granting them legitimacy.”

Regardless of the heated public debate on each of the decisions described above, the majority of educators, school principals, teachers and even parents, on both sides of the political map, have generally refrained from voicing their opinion. True, the “Borderlife” affair provoked a public protest, sending droves of buyers to bookstores, and several school principals defiantly announced that they had acquired copies for the school library. But if any debate erupted within the system, it stayed within the boundaries of the teachers' lounge.

“The moral abyss has not skipped the education system. I don't hear voices of school principals or teachers speaking up,” Degani said critically. He believes that there are those in the system who disagree with the minister's moves although they remain silent. This is understandable, he believes. “Those annoying to the system are laid off,” he said. In addition, senior ministry officials take care not to voice opinions on controversial issues. According to a top ministry official (speaking on condition of anonymity), some ministry staffers back Bennett and his policies, while those opposing him are wary of expressing their views. “However,” he emphatically said, “there is no atmosphere of terror in the ministry corridors.”

It seems that these words might be attributable, among other things, to a series of political attacks on figures in education due to their views, notably relating to civic studies. These episodes have scared the public. For instance, in 2014, civic teacher Adam Verete was fired from the ORT school network following a complaint letter by a student upset by the “leftist content” he had allegedly been slipping into classroom lessons. The allegations triggered a large-scale protest against him on Facebook. Two years earlier, the Education Ministry's supervisor of civics instruction, Adar Cohen, was dismissed over political disagreements. This was also the case for Nir Michaeli, the Pedagogical Secretariat chairman dismissed last July, just eight months after the government had approved his appointment. Another senior figure sent home, despite her success in office, was Hagit Messer-Yaron, vice chair of the Council for Higher Education (CHE). Bennett, who serves as chairman of the CHE, asked Messer-Yaron to resign, as her dismissal was not under his ministerial authority. Bennett did not disclose his reasons and went on to appoint Rivka Wadmany Shauman to replace her. The appointment triggered a petition by hundreds of academics, headed by senior academic staff members at leading universities, who protested the aggressive dismissal, as they put it, and the appointment that, they argued, was not professional enough. On Feb. 21, six members of the CHE resigned in protest of Bennett's conduct.

The education system is preoccupied with a series of public scandals although it has a host of critical professional issues to deal with. In fact, Israel is ranked at the bottom of the list of developed countries on indices such as class size and investment per student. Students' achievements as measured in national and international tests are incredibly poor. Education and achievement gaps between the periphery and the center are widening. But reward for handling these problems, if any, might be expected long after the minister leaves office. Political conflicts, in contrast, yield immediate electorate gains. Come to think of it, that could be the explanation for the Education Ministry's agenda in recent months.