In the past week, the educational system, the Knesset and the Israeli government have all dealt with an incident in which a 12th-grade student caused a stir around a teacher who expressed left-wing views in the classroom. 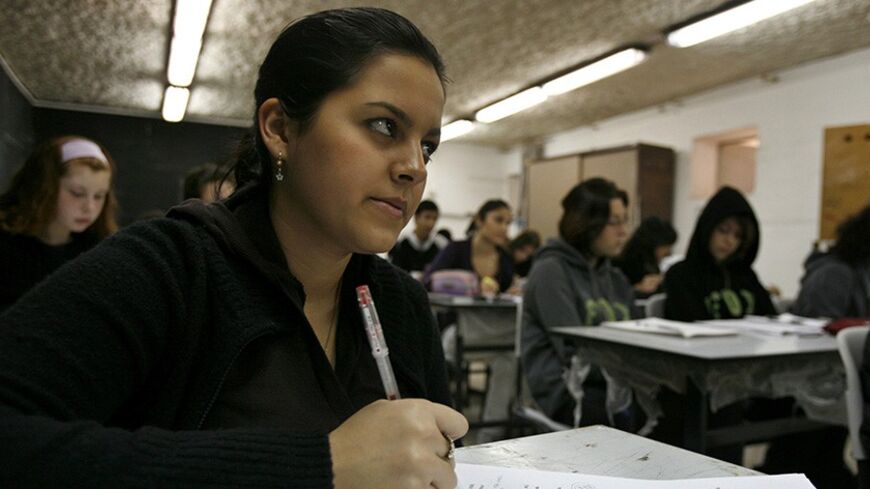 If she knew that the letter she wrote would cause such turmoil in the Israeli educational system, it’s doubtful whether she would have written it. About a week ago, Sapir Sabah, a 12th-grade student from the northern town of Kiryat Tivon, sent a personal letter to Minister of Education Shai Piron, in which she complained about one of her teachers. In her letter she told him that her civics teacher doesn’t stop slandering the state and insulting its most sacred values.

“The teacher emphasizes that the IDF [Israel Defense Forces] is an organization that behaves with unusual brutality and violence, unlike other armies,” she wrote. “He explains that the IDF is patently immoral and that he is ashamed of the military of our country.”

The publication of the letter sparked a great commotion across the country. Everyone talked about the school, the student and the teacher she complained about. They discussed the incident in the government, tempers flared in the Knesset Education Committee and the entire educational system has yet to say the final word.

Adam Verete, the teacher who aroused the controversy, was invited to an inquiry before his supervisors. In the conversation, he denied the decisive tone that was conveyed in the student’s letter. He admitted that he identifies himself with the radical left and believes that the Israeli army has acted immorally on more than one occasion.

The incident has raised questions that touch upon the most sensitive nerves of Israeli society: What is a sacred value, and what isn’t a sacred value? What are the limits of freedom of expression? And until what point is it permissible to disparage the values of the state? In its seventh decade of existence, Israel has yet to define these boundaries. The law has also refrained from setting the limit. But any time the court has been asked to decide on these issues, it granted freedom of expression the highest standing.

The letter found its way from the desk of the minister of education to the Facebook pages of right and radical right-wing organizations. Tens of thousands commented, demanding the immediate dismissal of the teacher. Others demanded holding disciplinary hearings against him. Others even suggested putting him on criminal trial for slandering the sacred values of the state, foremost of them the IDF.

In a short time the story spread like brush fire in the political system — but not before the ORT network, which runs the school, demanded that Verete resign. Zvi Peleg, the director of the network, who was invited to a debate at the Knesset Education Committee this week on Jan. 22, presented his limits on freedom of expression: “One should not talk about the IDF as an immoral military,” he told members of the committee. “There are sacred cows in Israeli society I will not allow to be slaughtered, and surely not the IDF. If Adam Verete claims that the IDF isn’t moral — he will not be a teacher in the school. Period.”

The chairman of the committee, Knesset member Amram Mitzna, who was once the head of the Labor Party and served as the commanding general of the Central Command of the IDF, delineated his own limits: “As a general in the army, I can also testify that the IDF also does immoral things. Only discussion of these topics will strengthen the army and the students.”

The class in which Sapir Sabah studies in Kiryat Tivon hasn’t kept quiet, either. The students, most of whom are to be drafted into the IDF over the summer, have defended the teacher and claimed that he gives them a chance to express themselves on the most sensitive topics in Israeli society. On Wednesday of this week they traveled to the Knesset to express solidarity with him. Some of them taped their mouths shut, others blindfolded themselves — a sign of what they perceive as silencing and blindness to the incident. Shani Koren, a graduate of the school and a student of Verete’s, said, “I feel a need to represent the other side and to say that for me, Adam Verete isn’t just a teacher but a real educator, dedicated and significant. Adam didn’t hide his political views, but at the same time he encouraged us to think critically about the reality in which we live.”

While the political right has painted the teacher as someone who disparages the values of the state and who has no place in the educational system, leftist organizations have argued that the teacher acted within the bounds of freedom of speech. Opposition leader and Knesset member Isaac Herzog warned that if the teacher is fired this will be interpreted as “a surrender to a witch hunt that could start with one teacher and end with a member of Knesset.” Knesset member Dov Khenin of the left-wing Hadash Party added, “A school is part of a democracy and not outside of it. What’s happening at ORT is a dangerous systemic failure.”

Kiryat Tivon, one of the quietest and most idyllic towns in Israel, has been caught in the eye of the storm. Parents, students and residents have been divided into two camps and find themselves protesting in support of the teacher and against him. Some have even held protest signs in front of Sapir Sabah’s family’s home. Social media networks have swirled around the student — who’s for her letter and who’s against. Many of her schoolmates have accused her of informing on the teacher, which could end up costing him his livelihood. Some have written that the fact that she grew up in a household identified with the right has caused her to act against the teacher. “I’m not affected by this,” Sapir answered her detractors on Facebook. “These are the responses I get from leftists ... it’s a shame that there’s people like you in our country!!! You are against the country and betray it … ”

And what does the star of the incident himself have to say? Verete is acting like someone who was thrown into the mouth of a volcano. The young man with a well-groomed beard and curious eyes seems like an unlikely candidate to stand in the middle of a public battle over the character of Israeli society. At first he considered resigning because he believed his opinions are quite out of the mainstream. Only after he discovered that he’s playing a key role in the public debate over freedom of expression, did he let political forces speak on his behalf.

In the wake of the incident, grave questions remain unanswered. Are the limits of discussion that are permitted in the public sphere permissible within the walls of a school? Does a teacher have the right to voice personal opinions in front of his students? Does love for country belong only to the right wing of the political map? Does disparaging sacred values equate to betraying the state? Is it possible to be a humanist and a man of conscience in a society fighting for its existence? The incident of this teacher has exposed only a few of these dilemmas, so far left unanswered.