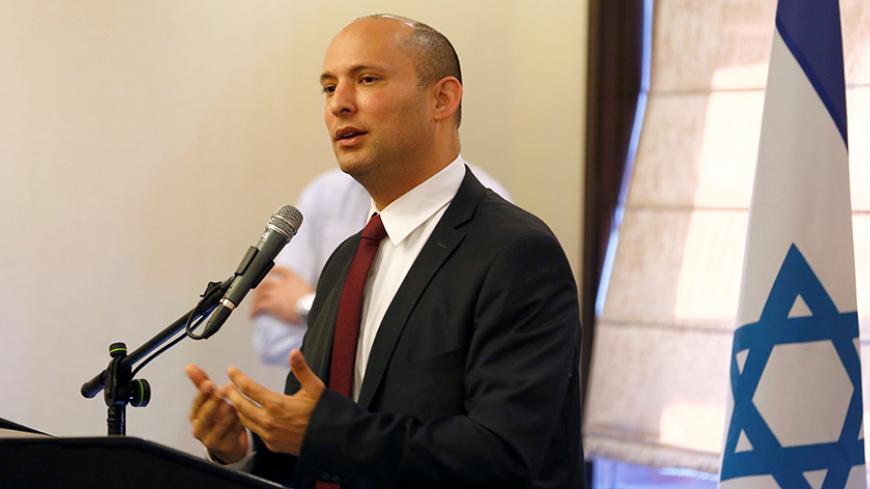 The Israeli press revealed this week that the police suspect Prime Minister Benjamin Netanyahu of cutting a deal with Yedioth Ahronoth publisher Arnon Mozes for favorable media treatment. But even as the storm was raging over the illicit contacts that would have made Netanyahu the censor of the nation’s most powerful media outlet, a small news item reported that Education Minister Naftali Bennett was on his way to becoming the chief censor of the school system. Under a unanimous Jan. 8 decision by the Ministerial Committee on Legislation, “The minister of education will set out rules to prevent any activity in schools by any external person or organization whose activity severely and significantly contradicts the aims of the national education system.”

According to the proposed bill, the minister is empowered to keep away from schools people and elements whose activity outside Israel raises “concern that soldiers of the Israel Defense Forces would be put on trial in international courts and foreign countries for actions they took in the course of their military service.” The main target is the veterans’ organization Breaking the Silence, which documents and publishes — in Israel and abroad — testimony by IDF soldiers of human rights violations in the occupied Palestinian territories.

Bennett, who sponsored the bill, posted to Facebook example video clips from which, in his view, the tender souls of Israeli school children must be protected. The clips show the veterans’ organization telling foreign reporters about the abuse of Palestinian detainees and wholesale violations of the IDF’s rules of engagement with civilians. In the interviews, the veterans protest the bombing of homes whose inhabitants are suspected of harboring Hamas members and blame the political echelon for forcing the IDF to manage the occupation on its behalf.

Bennett does not point to lies or even to inexactitudes in the testimony by members of Breaking the Silence. One can assume that had he found any, he would have shared them with his Facebook followers. He wants to preserve the idea put forth in the preamble to the new bill: “The soldiers of the IDF are the consensus of Israeli society.” While his comments were written, Israeli society was divided over the conviction of a soldier who shot to death a wounded Palestinian attacker. Bennett, the leader of HaBayit HaYehudi, wants to shield schools from human rights organizations such as B’Tselem, which disseminated the footage showing the soldier, Elor Azaria, shooting the incapacitated Palestinian and contributed to a large extent to his conviction. The country’s education chief thinks Azaria deserves an immediate pardon.

Bennett urged clemency for the soldier: “Keep believing in the IDF and in the man at its helm without doubts.” The last words, “without doubts,” are clear expressions of this dangerous man’s views — views that he is passing on to the next generation of voters on his way to the premiership. One must not doubt the IDF’s “purity of arms.” One must not doubt that our way is just; one must not doubt the “unity of Jerusalem”; one must not doubt that the entire world is against us. And most importantly: Under no circumstances should one air our dirty laundry abroad. As if organizations such as B’Tselem, Breaking the Silence and Yesh Din were the only things keeping the nations of the world from accepting Israel’s prolonged occupation of another people, ignoring the theft of private Palestinian lands, supporting Bennett’s plan to annex 60% of the West Bank and sending dance troupes to celebrate the 50th anniversary of the unification of Jerusalem.

But Bennett is not alone. The chairman of centrist Yesh Atid, Yair Lapid, and his fellow legislator and former chief military education officer, Knesset member Elazar Stern, also believe that 17-year-old boys and girls, many of whom will soon be deployed in the territories as soldiers, should not hear what an occupation army may and may not do. The signatures of Lapid and Stern appear on the bill, along with those of Bennett’s fellow party members Shuli Mualem and Bezalel Smotrich.

The principal of the Herzliya high school in Tel Aviv, Ze’ev Dgani, was among the few educators who regularly invited representatives of Breaking the Silence to address students. On Jan. 11, Dgani told Al-Monitor that even if the law passes, he will not prevent human rights organizations from entering the school. “Nonetheless,” he added with a sigh, “the bill was embraced even before it was adopted. We lost the battle. The voices of sanity are scared and silent. A spirit of fascism is taking over everything that was good.” Dgani came to this grim conclusion after participating in a conference concerning Breaking the Silence this week. “All the students who think the way I do were scared to talk,” he recounted. “Those who spoke are the ones who think like Bennett. He holds the young generation captive and the frightened teachers are silent.”

A survey conducted for the monthly Peace Index of the Israel Democracy Institute affirmed Dgani's diagnosis. It showed that in the two days before the Azaria verdict was delivered, 59.5% of Jewish Israelis thought that he should not have been tried to begin with and 57% were of the opinion that the trial was conducted unfairly. In the 18 to 24 age group, 72% found the trial unfair.

After the law passes the Knesset, human rights organizations will pin their hopes on the Supreme Court. The court will have to decide whether authorizing a politician to silence criticism and wipe out pluralistic thinking is compatible with the spirit of Israel's education law. The law stipulates, among other things, that the education system and those at its helm are tasked with strengthening pupils’ capacity for critical thinking and judgment and to nurture intellectual curiosity, independent thinking and involvement in Israeli society.

A little over a year ago, Bennett backed a decision by his ministry to remove from the compulsory high school curriculum a book by author Dorit Rabinyan titled “Borderlife.” The explanation given was that “the education system should not advance values opposed to those of the state.” The value that this subversive book promotes, according to Bennett, was mixed marriage. He feared that the story about a love affair between a Palestinian man and a Jewish woman could encourage Jewish girls to fall in love with Arabs. What happened after the book’s banning? Bookstores ran out of copies and the book returned to the best-seller list. The publishing house printed a new edition.

That’s what Bennett is doing for human rights organizations in Israel and abroad.