Israeli academics fear that the recent decision by the American Studies Association to join the boycott against Israel is another step in a trend that cannot be stopped. 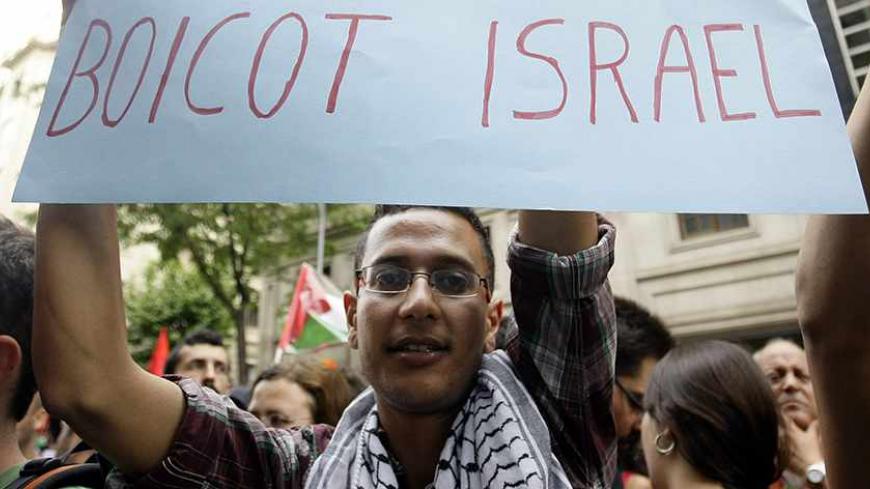 Demonstrators shout slogans as a man shows a banner which reads "boycott Israel" during an anti-Israel protest in front of Chamber of Commerce Israel-Catalunya in Barcelona, May 31, 2010. - REUTERS/Albert Gea

The American Studies Association (ASA), numbering about 5,000 academics, decided Dec. 15 by a majority vote to participate in the academic boycott on Israel, joining academic bodies in Europe — particularly in England — that have refrained from cooperative academic ventures with Israel for years. It seems that the prevailing Israeli argument that Europe is more inclined to come under the influence of Palestinian propaganda is no longer relevant.

Professor Rivka Carmi, president of Ben-Gurion University of the Negev, said in an interview with Al-Monitor that the Modern Language Association is expected to discuss academic boycotts of Israel in January in Chicago. The association numbers 30,000 members.

“The snowball effect has begun,” she said. “True, when it began in Europe, we had excuses and reasons to explain why and what was going on in Europe. We said it was small, esoteric, and then along came the ASA and proved that we are being swept away. In my opinion, it will only escalate.” According to Carmi, “Israel must do something, even though quite a few people say that this boycott has no real effect on the practical level because the Israeli researcher has no problem finding other researchers who will cooperate with him.”

Professor Hagit Messer-Yaron, former president of the Open University and now deputy chair of the Council for Higher Education, agrees that on the individual level, Israeli researchers will not be harmed. She said, “I personally receive frequent emails from colleagues in Iran with technical scientific questions, etc. No one even looks at where the mail comes from.”

However, Messer-Yaron feels that three areas should be examined in order to understand whether the boycott will have a substantive effect on the Israeli academic world. The first is the budgetary issue. Messer-Yaron argues that the main source of funding from the United States is the United States-Israel Binational Science Foundation (BSF), which is not affected by the recent decisions. The second sphere is that of academic publications. She said, "We must examine if articles written by Israelis do or do not receive appropriate treatment only because of the Israeli origin of the writer. The third sphere is the willingness of colleagues from academia to serve as critics of [Israeli] research proposals or participate in academic committees."

According to Carmi, “People in academia talk discreetly about unproven feelings according to which articles by Israeli researchers are being rejected. Researchers and academics have the feeling that they are not being invited to conventions. No one has proof, but there is a sense that the territory is beginning to burn. And now, with the decision by the American [Studies] Association, it is official — and that is worrisome.”

How do you explain the fact that the international boycott of Israel succeeds precisely in the academic field?

Carmi said, “Because these are the people who feel that they are in the liberal movement regarding human rights, and that this is a supreme, fundamental value to them. But you have to get into these people’s heads and ask them, for example, why aren’t they also dealing with the Arab countries and with Africa? Because there is Israel, and Israel is a model. Israel is not Abu Dhabi or Saudi Arabia. The liberals’ expectation of Israel is that its academia should champion these values, should critique, protest and so forth.”

ASA President Curtis Marez admits that this is the first time that his organization has made a call to boycott a country, even though Israel’s neighbors do not sport exemplary human rights records themselves and, in fact, violate human rights far more severely.

Messer-Yaron said, “A few years ago, an organization in which I publish my articles decided to boycott Iranian scientists. I was part of a group of scientists that operated against this boycott — and succeeded. That was a precedent for not publishing articles of a specific nationality, and today, that danger exists and is very tangible for us.”

Carmi argues that the decision to recognize the academic institution in the settlement of Ariel as a university a year and a half ago also contributed to the recent events. She said, “That did something. I have no proof, but I think that the Ariel example did something in the gamut of decisions, even if it was subconscious.”

Is there a way to stop what you view as the snowball effect?

Carmi said, “We must mobilize ourselves to carry out a kind of public relations blitz, something very substantial on the level of university staff and students. We must organize an aggressive campaign in the universities and recruit the university presidents, deacons and rectors. I don’t know if it will help, but at least in retrospect we will be able to say that we tried, that we did not sit by idly. I am very worried.”

Do you think that the efforts should include the Foreign Ministry as well?

“I don’t think that the Foreign Ministry can stand behind such a thing, or would even want to," said Carmi. "First, because they don’t have resources, but also because of the attitude of their chief. Their approach is, ‘What do the non-Jews know anyway? It doesn’t affect us, and we couldn’t care less.’ The conventional wisdom there is that it’s not a problem.”

Does the Council for Higher Education have tools with which to try and fight the boycotts and stop the escalation?

“On the basis of past experience," she said, "I know that student organizations have tremendous power. Clearly, some of the things taking place are dictated on high by sources with vested interests. That is part of the war, but we don’t have to follow the 'tooth for a tooth' approach. Instead, we must disseminate the message that the boycott is not a legitimate tool.”

Is it possible that Israeli academia did not demonstrate that it acts on behalf of human rights and opposes discriminatory policies, and therefore contributed to the actions taken against it?

Carmi said, “Not at all. It is very difficult to balance the picture, and that is not academia’s job. Academia does many things in the direction of coexistence. Ben-Gurion University has a long list of cooperative endeavors. An entire class of doctors from Jordan studied emergency medicine here. Eighteen Jordanians, all of them studied here at our expense after the Jordanian government acceded to their persuasive efforts and gave them visas.

“Palestinian and Jordanian students study in a [Ben-Gurion] branch in Kibbutz Sde Boker. Most of the relationships, contacts and cooperative ventures that exist today between the sides are in academia, but I am not sure that people want to hear that. A few years ago, when [the boycott] began in England, I was the first to come out against the phenomenon. I tried to convince them and explain what we are doing. How naïve I was — they ate me for lunch.”

Carmi’s description fits the prevailing mood on the campuses. The boycott train has already left the station and it’s hard to imagine stopping it in the near future — with an Israeli campaign or without it. Surprisingly, one person who came out recently against the boycott was none other than Palestinian Authority Chairman Mahmoud Abbas. After former South African President Nelson Mandela’s state memorial service in South Africa, Abbas said that he opposed the adoption of a boycott against Israel. Israeli academics can only imagine what would have happened had we not been in the very midst of negotiations with the Palestinians.