Companies around the world join the boycott of settlement products, while the Israeli right promotes a controversial law designed to punish Israelis who support the boycott. 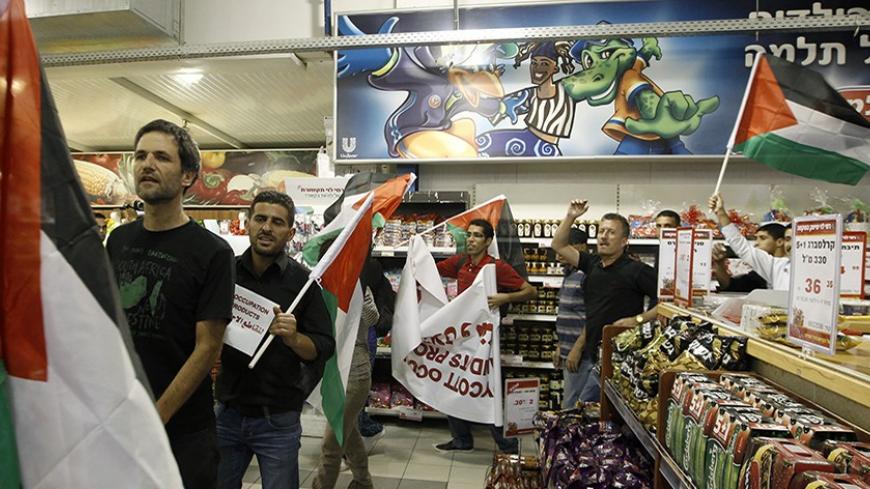 Foreign and Palestinian activists hold Palestinian flags as they march through a supermarket in the West Bank Jewish settlement of Modiin Illit, Oct. 24, 2012. - REUTERS/Ammar Awad

The halls of the Israeli Supreme Court were a beehive of activity on Feb. 16. The many journalists, representing Israeli and foreign media, made their way to the hall where a special panel of nine justices debated petitions against the Boycott Law, which was passed by the previous Knesset in July 2011. The law enables the imposition of a fine on an organization or an individual who calls for the implementation of a cultural, academic or economic boycott on an individual or body due to its connection to Israel or an area "under Israeli control," meaning settlements in the occupied territories.

The petitioners — human rights groups and several individuals — declared war against the law, claiming that boycotts are a legitimate protest tool in a democratic society.

The petitioners noted that the sanctions included in the law (monetary compensation for victims without proof of damage, as well as limitations on participation in government tenders and funding from its institutions) deter peace activists from engaging in political activity. The state’s representatives admitted that the law harms freedom of expression, but claimed that calling for boycotts is not part of the “core of freedom of expression” and cannot be considered legitimate political discourse.

On the front bench, sitting side by side, were Knesset member Ahmad Tibi, Uri Avnery, the founder of the Gush Shalom organization that promotes boycotts of settlement products and Deputy Foreign Minister Ze’ev Elkin, one of the bill's authors.

Unlike the previous court session, which was held without fanfare about 18 months ago, this time the exchanges in the court were covered prominently by the local media, and not for naught. The term “boycott,” with which Israel has been familiar for many years — in 1945 the Arab League declared a boycott against the emerging Jewish state — resonates from every corner of the world: from the Palestinian Authority, which calls for the boycott of settlement products, all the way to Australia, where the energy giant Shell sold its holdings (some 23%, worth more than $7 billion) in Woodside, the second-largest oil company on the continent.

In a report titled “The Resurgence of the Arab Boycott and its Influence in Australia,” Eti Levi, Israel’s commercial attache in Australia and New Zealand, wrote in June that Shell’s decision followed Woodside’s signing of a memorandum of understanding for the purchase of one-third of the rights to the Israeli offshore Leviathan gas reservoir. Luke Smith, an analyst with Australia’s Commonwealth Bank, estimated that the sale of Shell’s holdings stemmed from concern that the deal would hurt its ties with oil-rich Arab states where it operates huge projects.

Levi claimed that the Boycott, Divestment and Sanctions movement (BDS) doesn’t distinguish between the two sides of the Green Line “and promotes an academic, economic, cultural, diplomatic boycott on anything originating in Israel.” She also reported on protest marches by Australia's BDS movement outside stores of the Max Brenner chain, which sells Strauss products, claiming the Israeli company supplies food to Israeli soldiers. BDS initiatives go beyond “calling for the imposition of pinpoint sanctions on certain people or products which originate in the settlements.” Just like Prime Minister Benjamin Netanyahu and the instigators of the “Boycott Law,” Levi argues that the aim of the BDS movement is “to undermine the legitimacy of the State of Israel.”

Therefore, the law’s authors and supporters argue, the boycott has nothing to do with the ongoing occupation, the expansion of settlements and the faltering negotiations with the Palestinians. No wonder they ganged up on US Secretary of State John Kerry, who, in a speech at the Munich Security Conference on Feb. 1, dared draw a parallel between the boycott phenomenon and the Israel de-legitimization campaign.

After berating Kerry for being “a mouthpiece of Israel’s enemies,” Economy and Trade Minister Naftali Bennett announced, “Only security will bring about economic stability, not a terror state next to Ben-Gurion Airport,” and promised, "Either way, we knew in the past and know today how to stand strong."

In July, Yossi Verter, Haaretz's senior political analyst, reported that top government echelons in Jerusalem had been informed that large European banks were considering a ban on loans to Israeli companies that have a business or economic affiliation with territories across the Green Line. In his article, headlined “Someone should tell the economy minister what happens when the banks turn off the faucet,” Verter added that one doesn’t have to be an economist in order to understand the disastrous implications that such a decision might bear on Israel's market and economy.

Six months later, two of the largest banks in northern Europe, Sweden’s Nordea, which is the biggest Scandinavian bank, and Danske Bank, which is the biggest in Denmark, announced their intention to boycott Israeli banks that operate in the West Bank. Just to clarify, these two banks are among Fortune's top 500 companies in the world. Together they serve more than 16 million clients throughout Europe and hold assets worth hundreds of billions of dollars.

A European ambassador told Al-Monitor, “This is only the beginning.” He said the two banks were acting in accordance with EU regulations, which apply to the whole banking system, banning business ties with foreign companies engaged in illegal activity. The official European position views the settlement enterprise as a violation of international law and a detriment to the peace process.

Economist Avichai Snir, an expert on political economics, told Al-Monitor that while there are no data regarding recent economic damage to Israel from boycotts, one can arrive at an approximation. Snir suggested assessing the damage based on research conducted by professors Zvi Eckstein and Daniel Tzidon, which shows that during the second intifada, Israeli exports declined at an annual rate of about 14%. Snir, an economics lecturer at Bar-Ilan University and Netanya College, believes that the main decline can be explained by the damage to Israel’s image, and not by its production and export capabilities.

Attorney Daniel Reisner, who currently represents Israeli companies hurt by the boycott, told Israeli TV Channel 2 last month, “More and more companies come here, quietly, in the evening hours when no one can hear, seeking advice and saying: We came across such and such a phenomenon, is there anything you can do to help?” Reisner, who headed the international law branch of the Israel Defense Forces legal division, said he represents firms that lost contracts abroad because of the boycott, and noted that the boycott does not spare companies operating in Jewish neighborhoods of East Jerusalem. “I am concerned about a snowball effect,” he said.

Following are several examples, some taken from that television report, which illustrate this effect:

On the eve of their departure for the World Economic Forum at Davos in January, the heads of the organization Breaking the Impasse, who rank among Israel’s top business leaders, warned Netanyahu that failure of the diplomatic process would result in increased sanctions against Israel. The distress calls of the business leaders, just like Kerry’s warning, fell on deaf ears. It would be more correct to say that they fell on ears open only to the threats by members of the pro-settlement lobby, which influences the fate of Israel’s politicians.

Instead of stopping the snowball at the Green Line, members of the government are inviting the boycott to Israel’s borders. Mechanisms for the compensation of firms and entities hurt by the European boycott are turning the tax-paying Israeli public into partners in the settlement enterprise. Former Finance Minister Yuval Steinitz admitted clearly in November 2012, “We doubled the budgets for Judea and Samaria. We did so keeping a low profile, because we didn’t want elements in Israel and abroad to torpedo the move.”

Despite the low profile, and accusations of anti-Semitism, those “elements abroad” are escalating their use of the boycott weapon. All that’s left for Steinitz and his friends is to fight against the “elements in Israel,” with the help of the anti-democratic Boycott Law.