Israel no longer fears retaliating against international companies such as McDonald’s that settlers say are boycotting West Bank settlements by not opening up shop there. 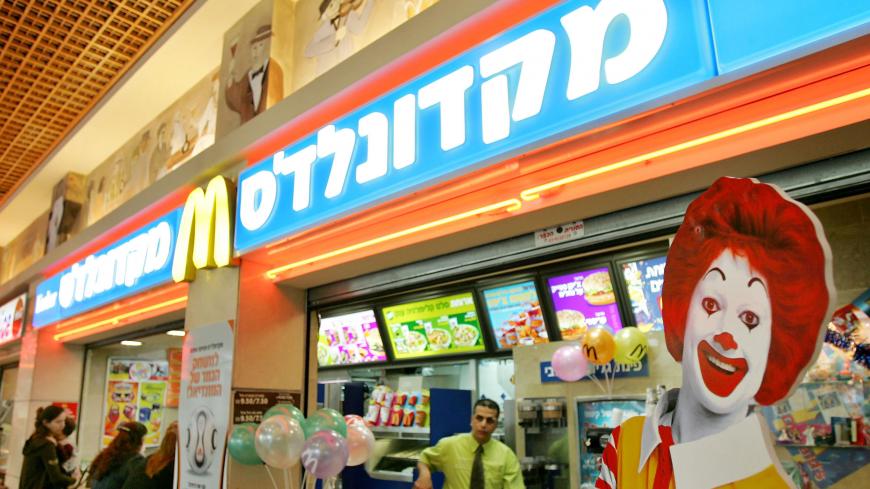 An organization comprising hundreds of disabled Israeli army veterans on June 4 placed large signs in front of McDonald’s restaurants in Tel Aviv similar in look to the warning signs posted at the crossings from Israel into the West Bank and Gaza. “Attention, Israelis! The area in front of you is Area M [a reference to Areas A and B of the West Bank] — an area under the control of a company that boycotts parts of the State of Israel. Anyone entering this area supports this boycott.” Many Israelis posed for photos next to the signs.

The campaign against the world’s largest fast food chain follows a demand by Yossi Dagan, chair of the Samaria Regional Council in the West Bank, to the ministers of finance and transportation, to prevent McDonald’s from competing in a tender to run a franchise at Ben Gurion International Airport because the company refuses to open restaurants in West Bank settlements.

In light of the growing protest, Economy Minister Eli Cohen of the Kulanu-Likud party also urged the attorney general to prevent the company’s participation in the tender. Cohen cited the 2011 Anti-Boycott Law that bans companies that boycott the settlements from taking part in government bids. Cohen told Al-Monitor that McDonald’s was actually hurting Palestinians who would otherwise be employed in these restaurants. “We cannot force companies to come and open [branches in the territories], but we will not allow companies that boycott parts of our state to bid,” Cohen said.

International and even Israeli law do not define the West Bank and Gaza Strip as part of the State of Israel (because Israel never annexed them after capturing them 52 years ago this week). However, Israeli law has found a way around this by expanding the definition of a boycott against Israel to include areas under its control.

Dagan’s letter to the ministers blamed Omri Padan, owner of the McDonald’s franchise in Israel, for the refusal to open McDonald’s restaurants in the West Bank. Padan is also a founder of the anti-settlement Peace Now movement. In fact, this is not the first time he has come under fire from the political right. In 2013, following an uproar over his refusal to open a restaurant at a new shopping mall being built in the settlement town of Ariel, the company responded that this has always been the policy of the chain. In 2015, right-wing activists attacked McDonald’s and Padan on social media, claiming he discriminates against soldiers and contributes money to the Palestinians.

The Gulf War, the Madrid agreements and the Oslo Accord led to significant disintegration of the Arab boycott of Israel in the 1990s, which began in 1945 even before the state was established. As a result, numerous international groups set up shop in Israel, including McDonald’s, which opened its first Israeli restaurant in October 1993. The chain currently runs 185 branches in Israel under the franchise of Aloniel, owned and chaired by Padan.

In 2018, the global property rental giant Airbnb decided under pressure from the boycott, divestment and sanctions (BDS) movement to remove from its sites property listings in the settlements. After a massive counterattack that included lawsuits and a series of condemnations by politicians and nongovernmental organizations in Israel and abroad, the company reversed its decision.

“The Airbnb incident was a test case,” said Dan Diker of the Jerusalem Center for Public Affairs, an expert on combatting BDS. “Since Airbnb gave in, the global boycott movements are being pushed into corners,” he told Al-Monitor. “Many countries support Israel, chief among them the US. The governor of Florida was the first US governor to pass legislation outlawing BDS. He was the one who pressured Airbnb hard to overturn their decision, which he declared anti-Semitic.”

The Israeli market is inundated with international companies. An Israeli minister can afford to take action against a mega-franchise like McDonald’s without fearing the company will pick up and leave. Nonetheless, the Israeli government has not declared victory over BDS, for now. It continues to invest millions in campaigning against the movement, perhaps because this serves the government's political interests.

The worldwide boycott movement has scored some victories in recent years, but these were mostly symbolic in value. For example, in 2017 the UN Human Rights Council compiled what Israeli officials call a "blacklist" of Israeli and international companies active directly or indirectly in Israeli settlements in the West Bank, East Jerusalem and the Golan Heights. The list includes over 200 names, but its publication has been put off several times.

In late 2018, the Chilean and Irish parliaments adopted legislation calling on their governments to boycott the settlements in any future agreements with Israel and to reexamine all past agreements. The effect of these resolutions on the Israeli economy has thus far been negligible.

Diker believes the major shift on the boycott issue stems from changes in the Arab world. “We are seeing a sharp turn in the Arab Sunni world, which is leading the campaign against anti-Israel boycotts because it needs Israel as a partner. In fact, the Palestinian leadership and Palestinian NGOs find themselves isolated. A significant deterrent has been created.”

Yariv Oppenheimer, head of the two-state coalition of the Geneva Initiative, disagrees with Diker’s conclusions that the world has accepted Israel’s control over the occupied territories. Oppenheimer told Al-Monitor that the issue of the territories is still on the agenda of the international community. “True, there is more power on the right side,” he says. “But the bottom line is that international conglomerates take into account global considerations and the issue of the [West Bank] territories is still on the agenda. Many artists do not come here. I think the right-wing boycott of McDonald’s is very ugly. How can you force businesses and people to invest in something against their conscience? The attempt by the state to force them to open a business in a place that holds no interest for them is very aggressive. This should concern all of us.’’

Getting back to McDonald’s, the launch of the fast food chain in Israel in 1993 was viewed at the time as a hoped-for breakthrough into the big world that no longer boycotts and ignores Israel. Now the refusal to open a franchise on the other side of the Green Line has become a burning political issue. The Israeli government stands behind the settlers and right-wing activists who attack giant international chains and their owners who do not toe the line of the so-called “new reality.” The government is actually signaling to the international business world that those that do not set up shop in settlements could find themselves boycotted.