EU and UN decisions to label settlement products and identify firms doing business there are driving companies to relocate from West Bank settlements across the Green Line. 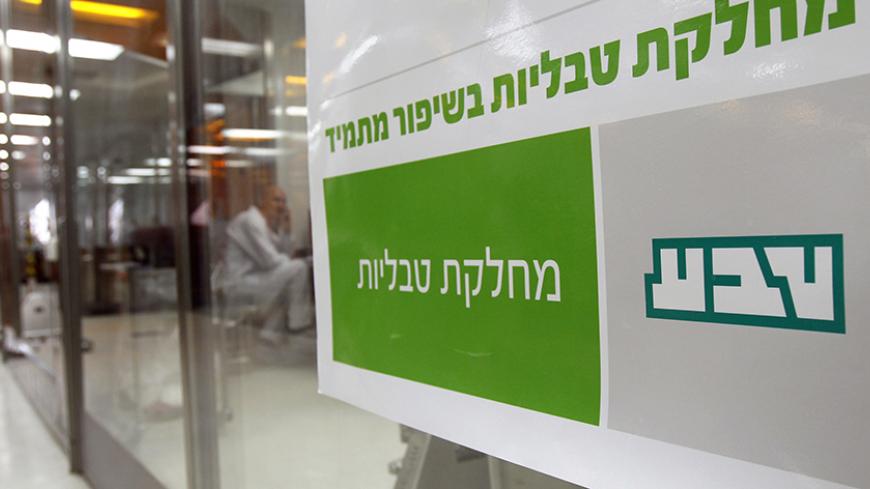 A sign bearing the logo of Teva Pharmaceutical Industries is seen in its Jerusalem oral solid dosage plant (OSD), Dec. 21, 2011. The company M.B.T., a subsidiary of Teva, recently relocated from the Atarot settlement industrial zone in the West Bank to the Israeli town of Beit Shemesh. - REUTERS/Ronen Zvulun

A Google search for the Hebrew words for "soldier," "Hebron," "shot," "wounded" and "24.3" turns up more than 110,000 results as of March 28. At almost the same moment as the chilling clip documenting the alleged execution of an injured Palestinian attacker by an Israeli soldier was making the rounds online, Israeli diplomacy and morale sustained yet another blow.

The UN Human Rights Council voted to compile a blacklist of all Israeli and international firms operating directly or indirectly in the settlements of the West Bank, East Jerusalem and the Golan Heights. This is a far more serious move than the European Union’s decision to label Israeli products made in the settlements. More than a condemnation of the settlements for violating international law and a call to avoid helping them in any way, it also warns firms and businesspeople that involvement in financial dealings with the settlements could entangle them in human rights violations.

In a Pavlovian reaction the same day, the prime minister’s office said that the UN Human Rights Council “has become an anti-Israel circus.” But despite the impression that Prime Minister Benjamin Netanyahu sought to convey, according to which the vote was simply another predictable media event, the decision signifies another stage in the deterioration of Israel’s foreign relations. Not one state — not even Germany, Israel’s safest diplomatic bastion — voted against the decision. Thirty-two states voted in favor and 15 abstained, among them central European Union member states such as France, the UK, Belgium, Holland, Portugal and Germany. The former foreign minister, Knesset member Tzipi Livni of the Zionist Camp, decried the abstention by those states closest to Israel as a dramatic diplomatic collapse.

The deterioration of Israel’s international standing is not an issue that brings down governments in Jerusalem. What troubles Israelis are the mortgages they take for their apartments and other costs of living. Israelis will not take to the streets en masse over the relocation from the West Bank of companies like seltzer manufacturer SodaStream, Mul-T-Lock, Barkan Wines, Bagel Bagel and soon the Dead Sea Ahava cosmetics plant in the wake of the EU product labeling decision and indications of an international anti-Israel boycott. Few will bother to peruse the latest investigative report by the Gush Shalom organization, which reveals that the list of companies fleeing the West Bank is growing and now includes Adanim Tea, which moved out of the settlement of Ofra; the cosmetics firm Intercosma, which moved from the Atarot industrial park east of Jerusalem to Ashdod; Ikoo Design, which relocated from the Barkan industrial park to Ashdod and the town of Nesher; M.B.T., owned by drug giant Teva, which uprooted itself surreptitiously from the Atarot settlement industrial zone to the town of Beit Shemesh; and the Delta textile company, which relocated its warehouses from the West Bank to the industrial zone of Caesarea.

The Gush Shalom investigation also indicates that along with plant relocations from the occupied territories into areas within Israel, the Green Line separating the two areas is being blurred and consumers are being misled. This is particularly true of companies operating in the settlements that sell their products abroad or maintain international contacts. The report mentions Majhoul Dates owned by the Jordan River Company, the Fried blanket company, the furniture chain Beitili and Keter Plastic. None of these firms mention anywhere on their products the location of their production facilities. A senior European diplomat told Al-Monitor this week that Europeans have been familiar with these evasion tactics for some time. As a result, according to the diplomat, consumers abstain from buying any Israeli products on the supermarket shelves, lest they unknowingly end up buying products made in the occupied territories. Although European governments have not declared an official boycott of Israeli products and will probably not do so in the foreseeable future, Bank of Israel data indicates a declining trend in Israeli exports.

Economist Avichai Snir of Bar-Ilan University and the Netanya Academic College explained that the best way to examine the effect of Israel’s negative image on its export volume is to compare the trends of Israeli exports to the international trade indexes. According to Finance Ministry figures, until 2011 and 2012, Israeli exports reflected the international indexes. When those went up, so did Israel’s exports, and vice versa. Since then, the international indexes have been going up as a result of the economic recovery in world markets. On the other hand, Israeli exports are treading water, with a certain indication of decline, even though the value of the shekel stopped rising in 2014, a trend that had hurt exports.

From 2004 to 2012, exports accounted for some one-third of Israel’s economic growth, resulting in increased employment and state revenues and even in a certain drop in the inequality index. Since then, according to Snir, not only have exports not contributed to growth, they have contributed to an economic slowdown. The tourism industry is also in decline, whereas most countries in the West are experiencing a handsome growth of foreign tourism. Data from the Central Bureau of Statistics shows that the number of overnight stays by foreign tourists dropped last year by 20% compared to 2012. Snir cited studies showing that at least 10 to 15% of the decline in the number of tourists stem from the effects of negative headlines about Israel in the world media and not necessarily from security concerns in the region.

“The world is becoming increasingly competitive. States are trying to convince their consumers to buy locally made products and are looking for ways to reduce imports and increase exports,” said Snir. “Israel’s image as an occupying power does not serve it well.” Obviously, nor does the execution of a Palestinian without trial. Israelis don’t want to know the moral and diplomatic cost that their country is paying and will continue to pay for the export of photos showing the injustice of the occupation. They have been paying the financial price for many years and will continue to pay. It’s time they stopped denying and start understanding this dear cost in human life and financial capital.