An incident in which US sailors were held by Iran in the Gulf waters comes at a particularly sensitive moment, as implementation day for last year's nuclear deal is expected within days. 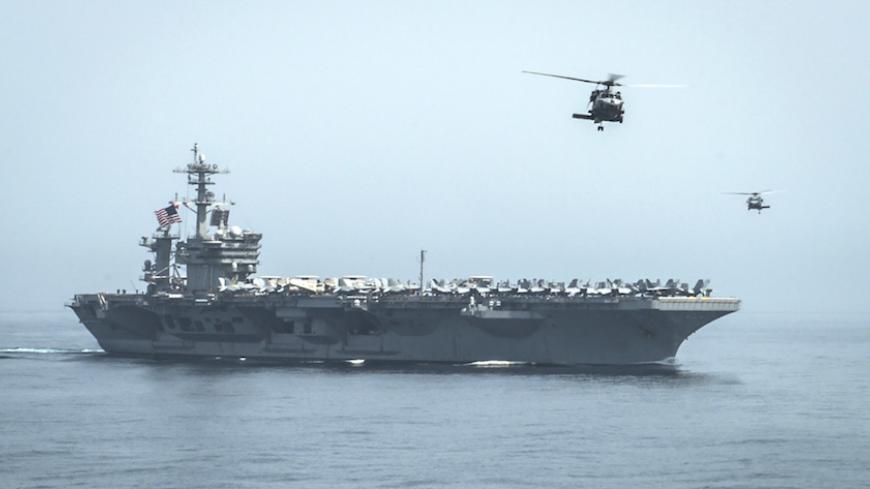 Washington — US sailors aboard two small US naval vessels were held by Iran in Persian Gulf waters Jan. 12 after one of their boats experienced apparent mechanical trouble, but Iranian authorities have assured the United States that the sailors will be promptly released and allowed to continue their journey, the United States said.

The potentially provocative incident occurred as Iranian officials have been publicly signaling Iran is completing the final steps required in rolling back their nuclear program to launch implementation day of the Iran nuclear deal, possibly within the next week.

“Earlier today, we lost contact with two small US naval craft en route from Kuwait to Bahrain,” a senior US administration official, speaking not for attribution, said by email Jan. 12.

“We subsequently have been in communication with Iranian authorities, who have informed us of the safety and well-being of our personnel,” the US official said. “We have received assurances the sailors will promptly be allowed to continue their journey.”

Pentagon sources said the US boats may have inadvertently drifted inside Iran’s territorial waters after one of them had mechanical troubles, the Associated Press reported. US Secretary of State John Kerry was in touch with Iranian Foreign Minister Mohammad Javad Zarif after being notified of the incident around midday, and was assured that the crew members are safe and that the situation will be resolved promptly, the Associated Press said.

US officials, speaking not for attribution, said they did not see indications at this time that Iran was trying to be provocative, suggesting the encounter between the US sailors and the IRGC on Farsi Island had occurred as a result of mechanical trouble with one of the boats. They are hoping that the incident can be resolved promptly and quietly, and that the 10 US sailors could be released Jan. 13. Kerry has been in direct contact with Zarif to discuss the matter, a US official told Al-Monitor.

Iranian Foreign Ministry officials did not immediately respond to a query.

The US sailors were reportedly sailing near Farsi Island when one of the boats went aground with mechanical trouble, the Associated Press report said. Farsi Island is near the Iran-Saudi border, where an IRGC base is located, Ghorbani said in a subsequent tweet.

The naval encounter comes at a sensitive moment, as the United States, Iran and other world powers expect to officially herald implementation day of the landmark Iran nuclear deal in the coming days. Inspectors from the International Atomic Energy Agency have arrived in Iran to conduct verification that Iran has taken all the nuclear steps it agreed to in the nuclear deal, a spokesman for the Atomic Energy Organization of Iran was cited saying by Iranian media Jan. 12. If and when the IAEA provides such verification, the United States and the European Union will lift nuclear-related sanctions on Iran. Diplomatic sources have suggested implementation day is likely to come sometime during the week of Jan. 15-20.

If the naval incident is defused quickly, it could alternatively highlight the benefits of US-Iran engagement and the robust channel that Kerry and Zarif have built up, some former US officials said.

“This points to the benefit of successful diplomacy with Iran,” Joel Rubin, a former senior State Department official said. “US military leaders for years have worried about unintentional incidents at sea that could provoke a crisis. While we don't know for certain if this is the case, it's a good thing that we have the ability to pick up the phone and call the Iranians to resolve this. It's much better than the alternative.”

On Jan. 9, the US Navy released a short video of an IRGC vessel firing rockets Dec. 26 near US warships in the Strait of Hormuz, Reuters reported. Iran had previously denied the IRGC vessels had launched the unguided rockets.

In September 2014, Iran released after several hours a charter aircraft carrying US military contractors from Afghanistan to Dubai that it had forced to land because its flight plan was out of date.