While diplomacy helped secure the release of US sailors held by Iran, some hard-liners believe the countries are becoming too close for comfort. 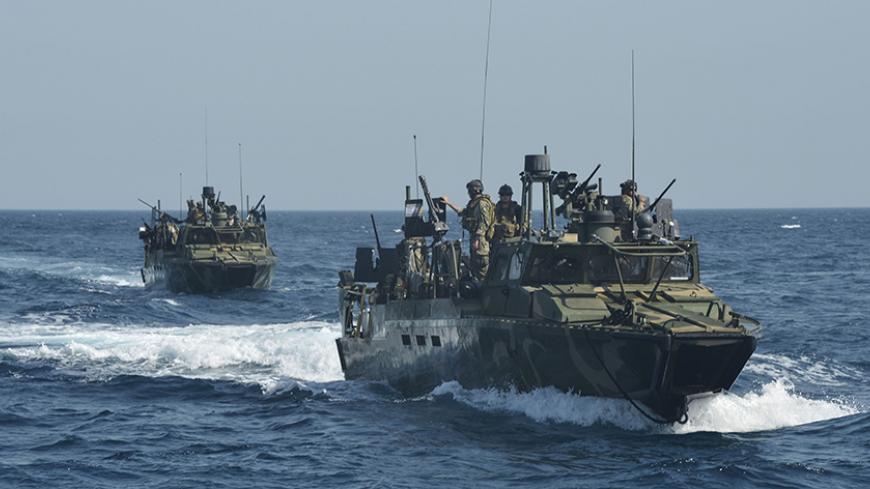 Riverine command boats assigned to Coastal Riverine Squadron (RIVRON) 4 transit open water in the 5th Fleet area of responsibilities, June 27, 2013. Ten sailors aboard two US Navy riverine patrol boats were seized by Iran in the Gulf on Jan. 12 and released the next day after intensive diplomatic efforts. - REUTERS

The swift release of American sailors who had entered Iranian waters was hailed by many as a sign of the improved relations between Iran and the United States. Critics, however, believe "improved" is the wrong word.

As Al-Monitor's Laura Rozen reported Jan. 13, US Secretary of State John Kerry and Iranian Foreign Minister Mohammad Javad Zarif spoke on the phone five times over the course of 10 hours Jan. 12 to secure the sailors' release.

The incident has dominated Iranian newspapers. The last time foreign sailors were taken by Iran was in 2007 when 15 British sailors were held for 13 days. With the implementation of the nuclear deal and the removal of sanctions expected to be announced within days, the fate of 10 American sailors in the hands of the hard-line Islamic Revolutionary Guard Corps (IRGC) could have turned into a long and costly crisis. Iranian President Hassan Rouhani and US President Barack Obama both have invested heavily in the nuclear negotiations, and each has paid a price at home in their pursuit.

Iran Newspaper, which operates under the Rouhani administration, wrote a detailed account of the incident, covering the Kerry-Zarif consultations and the gratitude of American officials in resolving the issue in a timely manner.

Reformist Etemaad Daily’s top story was headlined “Boat Diplomacy." The article said, “A day that began with serious fear of a new conflict between the United States and Iran ended with the unveiling of a new chapter from the promising results of diplomatic efforts.” While the negotiations between Kerry and Zarif lasted 21 hours, “they were the result of 21 months of nuclear negotiations,” the story said.

Etemaad concluded, “Again, diplomacy, in the heart of the world’s bloodiest region, between two staunch opponents on the global scene, was able to show that it is still the best substitute for fighting.”

Not all Iranian media were happy to see the successful efforts of diplomacy, however. Raja News, which is linked to the Endurance Front, a hard-line political group and Rouhani’s most vocal critic in parliament, wrote that the negotiations between Kerry and Zarif had violated Supreme Leader Ayatollah Ali Khamenei’s guidelines that bilateral negotiations between Iran and the United States should be restricted to the nuclear issue. Raja referenced Khamenei’s March 2015 speech in which he said, “The negotiations with America are about the nuclear issue and nothing else.”

The article said Western media reported the pending release of US sailors after Zarif and Kerry spoke by phone. IRGC officials later said those reports were "speculation" and pointed out that no Iranian official had yet publicly confirmed that the sailors would be released. The articled argued that this was not the first time that non-nuclear discussions between the United States and Iran had taken place. Raja claimed that when Iran diverted its aid ships meant for Yemen to Djibouti in May, it was due to US pressure and came after a conversation between Kerry and Zarif.

Raja said the recent phone discussions between Kerry and Zarif are evidence that the Rouhani administration’s “primary project is to expand ties with America at all levels.”