US Secretary of Defense Ashton Carter credits the Kerry-Zarif channel and US-Iran diplomatic engagement for the swift release of US sailors. 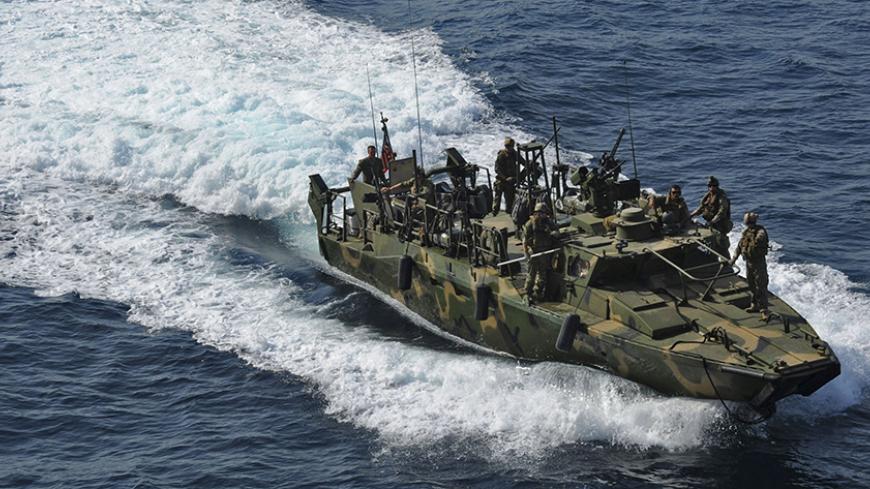 WASHINGTON — US Secretary of Defense Ashton Carter welcomed the release of 10 US sailors Jan. 13, and credited the diplomatic engagement of Secretary of State John Kerry and Iranian Foreign Minister Mohammad Javad Zarif for the swift resolution of the incident that occurred when two small US Navy patrol boats sailing from Kuwait to Bahrain apparently drifted into Iranian waters near Farsi Island.

“I am pleased that 10 US Navy sailors have departed Iran and are now back in US hands,” Carter said in a Jan. 13 statement. “I want to personally thank Secretary of State John Kerry for his diplomatic engagement with Iran to secure our sailors' swift return. Around the world, the US Navy routinely provides assistance to foreign sailors in distress, and we appreciate the timely way in which this situation was resolved.”

Kerry, noting he is a former US Navy sailor himself, expressed gratitude to Iranian officials for helping to resolve the issue quickly and peacefully.

“I want to express my gratitude to Iranian authorities for their cooperation ‎in swiftly resolving this matter,” Kerry said in a statement Jan. 13. “That this issue was resolved peacefully and efficiently is a testament to the critical role diplomacy plays in keeping our country safe, secure and strong.”

Kerry spoke with Zarif by phone five times over the course of ten hours on Jan. 12 to try to gain the sailors’ release, after learning of the incident around noon while in a meeting with Carter and their Filipino counterparts, a senior State Department official said.

Kerry was informed by Zarif in the third phone call, about 3:15 p.m., that it was Zarif’s understanding from the people holding the sailors that they would be released at dawn Jan. 13, and that they were being fed and treated well, the US official said.

“The Secretary [Kerry] made clear the most important priority was that [the sailors] be released safely and unharmed and as quickly as possible,” the senior State Department official, speaking not for attribution, said Jan. 13. Kerry told Zarif, the official said, “if we were able to [resolve] this … in the right way, we can make this into a good story for both of us.’

“Foreign Minister Zarif insisted he was working on this and agreed with the imperative of getting this resolved as soon as possible,” the US official said.

An existing communications channel between the US Navy and the Iranians operating in the Persian Gulf was used to work out the details of the Jan. 13 release, the US official said.

The Pentagon said in a statement that the 10 US sailors “departed Farsi Island at 8:43 a.m. GMT [3:43 a.m. EST], aboard the two Riverine Command Boats (RCB) that they had been operating when they lost contact with the US Navy. The sailors were later transferred ashore by US Navy aircraft, while other sailors took charge of the RCBs and continued transiting toward Bahrain, the boats' original destination.”

The Navy will investigate the circumstances that led to the sailors' presence in Iran, the Pentagon said.

While Kerry used the phone calls to try to explain the US understanding of how the vessels had apparently entered Iranian waters, initially thought possibly due to a mechanical problem, he never apologized, given there was nothing to apologize for, the US official said. He “did not apologize, he explained,” the US official said.

That the incident was able to be resolved quickly and peacefully “really does speak to the importance of using these diplomatic tools,” the US official said.

“Happy to see dialogue and respect, not threats and impetuousness, swiftly resolved the sailors episode,” Zarif wrote on Twitter on Jan. 13. “Let’s learn from this latest example.”

The naval encounter came at a sensitive moment, as the United States, Iran and other world powers expect to officially herald implementation of the landmark Iran nuclear deal in the coming days. Inspectors from the International Atomic Energy Agency have arrived in Iran to conduct verification that Tehran has taken all the nuclear-related steps it agreed to in the deal, a spokesman for the Atomic Energy Organization of Iran was quoted as saying by Iranian media Jan. 12.

If and when the IAEA provides such verification, the United States and the European Union will lift nuclear-related sanctions on Iran. Diplomatic sources have suggested implementation day is likely to be sometime during Jan. 15-20.

Current and former US officials said the quick defusing of the naval incident highlights the benefits of US-Iranian engagement and the robust channel that Kerry and Zarif have established in hundreds of hours of negotiations mostly on the nuclear issue.

“This points to the benefit of successful diplomacy with Iran,” former senior State Department official Joel Rubin told Al-Monitor. “US military leaders for years have worried about unintentional incidents at sea that could provoke a crisis. While we don't know for certain if this is the case, it's a good thing that we have the ability to pick up the phone and call the Iranians to resolve this. It's much better than the alternative.”

This piece was updated Jan. 13 at 2 p.m. with additional information from US and Iranian officials.