Iranian President Hassan Rouhani has called for an investigation into the leak of a tape meant for posterity. 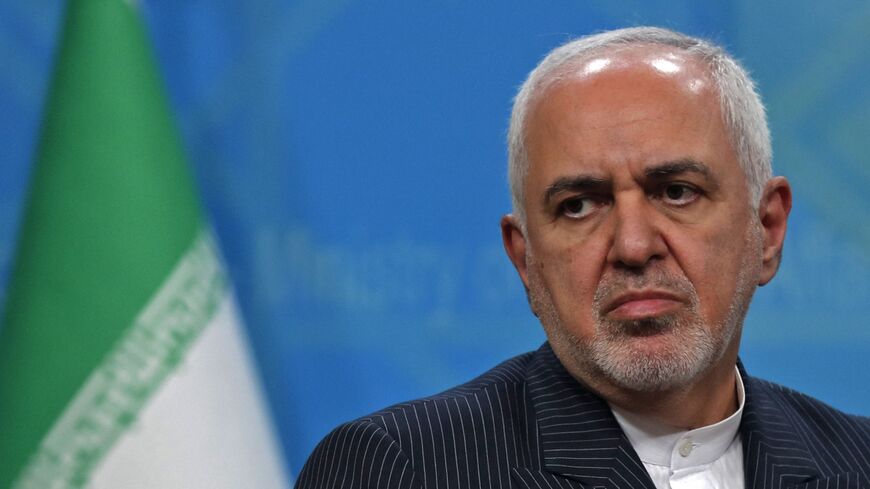 Iranian Foreign Minister Mohammad Javad Zarif looks on during a joint press conference with his Iraqi counterpart in Iraq's capital, Baghdad, on April 26, 2021. Iran's Foreign Ministry downplayed a leaked audiotape of Zarif in which he said the military played too strong a role in diplomacy, saying it reflected his personal opinions. - AHMAD AL-RUBAYE/AFP via Getty Images

Iranian President Hassan Rouhani ordered an investigation April 27 into the leak of an audiotape containing containing confidential statements by Foreign Minister Mohammad Javad Zarif. Government spokesman Ali Rabiee said Iran’s Intelligence Ministry has been assigned with identifying those behind the leak, which he said is being treated as a "conspiracy against national security."

Iranian officials have said the audio was part of an oral history project meant to be archived at the presidential office as a confidential file.

Two days into the leak, the bombshell was still leaving behind ripple effects across Iran’s political and media circles. The hard-line camp appeared to have opened up a new front line against the veteran diplomat it has long accused of "treason and "subservience" to the West.

"Zarif had better be wise enough to step down or he will be impeached and dismissed by the revolutionary parliament," said hard-line lawmaker Hossein Haghverdi, one among many disparaging the foreign minister in the conservative parliament, which has been critical of Zarif's foreign policy as a whole.

In the three-hour audiotape, Zarif said he had been repeatedly undermined by Qasem Soleimani, the Islamic Revolution Guard Corps commander of the Quds Force who was killed by the United States in January 2020.

Hard-line newspapers on April 27 were inundated with sharp criticism and name calling. The ultraconservative Resalat accused Zarif of undercutting the revered Soleimani, attacking the foreign minister as "narafigh," a Persian term having to do with someone who stabs a friend in the back.

The hard-line paper Vatan Emrooz called Zarif "petty" and claimed that Soleimani's death was an outcome of Zarif's "passive diplomacy."

Hard-liners said Zarif’s statements against Soleimani had sent "waves of joy" among American officials and Iranian opposition groups. As proof for this, they cited a tweet by former US Secretary of State Mike Pompeo. "Our Administration’s exquisite strike on Qasem Soleimani had a massive impact on Iran and the Middle East. You don’t have to take my word for it. Ask Javad Zarif," Pompeo wrote April 25.

The post did little to ease the fury of his relentless critics, who called it an attempt to dodge responsibility. "Such vague comments do not serve a purpose," wrote the Tasnim News Agency, which is run by the Islamic Revolutionary Guard Corps. "The public expects him to frankly and openly address the disastrous content of his interview and the way it was leaked."

In the days to come, Iranians are likely to continue the debate, with a focus on how the leaked file will impact the June presidential election. Zarif has repeatedly said he has no intention to run. But in recent weeks, the Reformist camp had been attempting to convince him to roll up his sleeves and campaign for the presidency. Amid the fallout of the leaked file, however, any plans for a Zarif run for president may have been nipped in the bud.