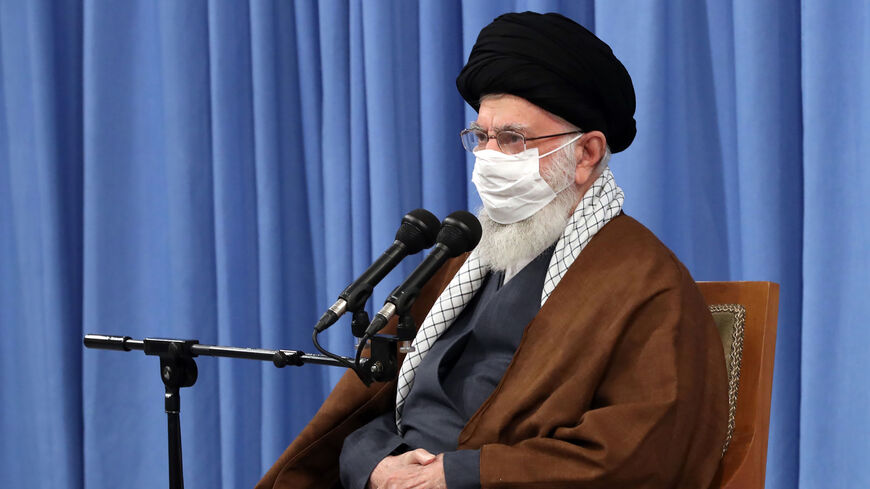 A handout picture provided by the office of Iran's Supreme Leader Ayatollah Ali Khamenei on Oct. 24, 2020, shows him wearing a protective face mask as he gives a speech in the capital Tehran. - KHAMENEI.IR/AFP via Getty Images

Iran’s Supreme Leader Ayatollah Ali Khamenei has finally responded to the leaked recording in which Iran’s foreign minister spoke candidly about the difficulties of managing the country’s foreign policy, which is complicated by military influence.

The audio, which was made for the sake of posterity, was not intended for public release. Since becoming public and being shared online, the Iranian and American pres have been speculating about the fallout, with some wondering if it will force Mohammad Javad Zarif’s resignation.

In the recording, Zarif appears to be critical of the influence of late Quds Force commander Qasem Soleimani. Zarif was frustrated with a number of regional decisions, especially pertaining to Syria and other diplomatic efforts, complaining that Soleimani would not heed his advice. Soleimani was assassinated at a Baghdad airport by the United States under the previous administration.

Hard-line Tasnim News Agency's headline read, “Khamenei’s direct criticism of Zarif’s audio.” However, in the speech, Khamenei did not address Zarif directly and if anything, provided Zarif cover from hard-liners, some feel.

Khamenei said that for years the United States has been upset about the Quds Force and Soleimani’s influence and “nothing should be said that would confirm their statements.” The Quds Force is a subset of the Islamic Revolutionary Guard Corps, which answers directly to the supreme leader and is responsible for operations outside of Iran’s borders. Soleimani was a particularly high-profile individual in the region and would travel extensively visiting Iranian-backed groups in Syria, Iraq and Lebanon.

Regarding Zarif’s frustrations about foreign policy decisions, Khamenei said that a country’s foreign policy is determined by many factors and denying one aspect “is a great mistake.”

Khamenei said, “The Quds Force has been the biggest influence in stopping a weak diplomacy in West Asia and has paved the path for a strong diplomacy for the Islamic Republic.” He went on, “The Foreign Ministry participates in determining foreign policy but it is not the decision-maker, rather it is the executor.”

Khamenei stressed the importance of the Supreme National Security Council in determining foreign policy. Its members include representatives from the judiciary and military, both of which answer to Khamenei. It also has members from the cabinet. Rouhani himself was secretary of the SNSC for 15 years before becoming president. Many of the country’s top decisions are discussed and debated there before being taken to Khamenei for final approval. Khamenei stressing that decisions are made at the SNSC gives Zarif some wiggle room and absolves him of blame should certain aspects of foreign policy go wrong.

Khamenei’s comments seem to put the issue to rest. While the parliament may still call on Zarif to respond to questions about it, at this point it is unlikely that he will be forced to resign, especially with the nuclear negotiations in process.