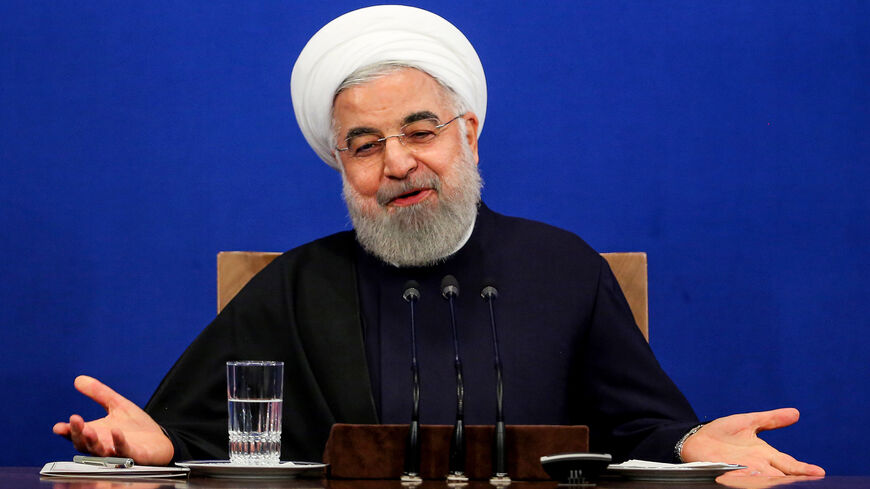 Iranian President Hassan Rouhani speaks during a news conference in the capital Tehran on Feb. 16, 2020. - ATTA KENARE/AFP via Getty Images

President Hassan Rouhani has finally made public comments about the audio file of his foreign minister speaking candidly regarding a number of significant domestic and foreign policy issues.

“These files were meant to be confidential,” Rouhani said today at a cabinet meeting, adding only some of the content was meant to be shared. He continued, “A theft has taken place and … the Intelligence Ministry has to use all of their abilities to find out how these files were stolen.”

Rouhani, distancing himself from the comments made by Foreign Minister Mohammad Javad Zarif, said, “Some of the contents are not the views of the administration or the president and it's possible for a minister to have views that they want to remain confidential.”

While Zarif’s recordings did not reveal anything previously unknown, they did showed some disconnect in approach and strategy between himself and former Quds Force commander Qasem Soleimani and the Islamic Revolutionary Guard Corps. Addressing those differences, Rouhani said, “Diplomacy and the battlefield do not counter each other.”

Rouhani added, “Our country has specific frameworks. All of the complex foreign policy and defense issues are reviewed at the Supreme National Security Council. Whether we want to make a policy decision or an operational decision, it is reviewed at the council.” He said that military commanders and other officials at the SNSC meetings discuss various issues until there was a consensus, which is sent to Supreme Leader Ayatollah Ali Khamenei.

Rouhani also defended Soleimani, calling him a “special individual” and noting that he had worked alongside Soleimani for 36 years. He said that Soleimani was present at many SNSC meeting and while Soleimani was insistent on his views, he was also open to the views of others. Rouhani also called Soleimani “the best foreign policy adviser” and someone who could be trusted for “accurate” knowledge about an issue.

Mohammad Bagher Ghalibaf, current speaker of parliament and longtime friend of Soleimani, also defended the former Quds Force commander. Ghalibaf said that national security involves both diplomacy and the military and separating the two goes against the national interests of Iran. Indirectly addressing Zarif, Ghalibaf said that just as the killing of Mohammad Beheshti rooted the Mujahedeen-e-Khalq out of post-revolution Iran, the killing of Soleimani will root pro-Westerners out of Iranian politics.