The recording of Iran’s foreign minister has led to speculation as to motivations and meanings. 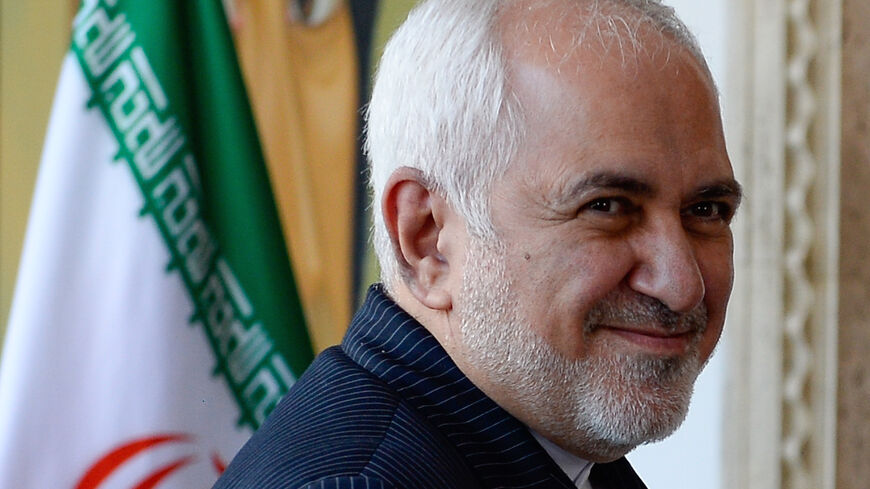 Iranian Foreign Minister Mohammad Javad Zarif gestures during a meeting with Venezuelan Foreign Minister Jorge Arreaza (out of frame), at the Casa Amarilla palace in Caracas, on Nov. 5, 2020. - CRISTIAN HERNANDEZ/AFP via Getty Images

Ever since a recording of Iran’s Foreign Minister Mohammad Javad Zarif was leaked yesterday, Iranians have been discussing not only the contents but also the possible motivations behind releasing the audio.

The audio itself does not reveal anything scandalous or unknown. Zarif, however, does offer his own interpretation of specific events. Zarif accused the Islamic Revolutionary Guard Corps (IRGC) of running their own regional foreign policy and ignoring the advice of the Foreign Ministry. In the recording, Zarif also said that former Quds Force commander Qasem Soleimani had traveled to Moscow in 2015 to undermine the nuclear negotiations. Zarif also expressed frustration with certain IRGC decisions, such as sending ground forces to Syria and using Iranian airlines without the knowledge or consent of the Foreign Ministry.

The fact that the IRGC — which answers to Supreme Leader Ayatollah Ali Khamenei, who has final say on all state matters — does not answer to the administration is not particularly revelatory or damning. It is odd that Zarif would accuse Soleimani specifically of trying to undermine the nuclear negotiations during his Moscow trip when at the time it was understood that his trip was to enlist Russian support in the Syrian war.

It is not yet clear if the audio will hurt Zarif’s standing in the Islamic Republic. If Khamenei or President Hassan Rouhani were truly displeased with his statements or the release of the recording, they could have already demoted him. It’s possible Khamenei himself will indirectly address the matter in the next speech. Zarif has continued duties as usual so far, meeting with his Qatari counterpart in Doha yesterday.

A number of Iranian social media users assumed it was the administration or individuals within Zarif’s camp who released the audio, or at the very least noted it is Zarif who will benefit from the audio being released.

Mohammad Ali Abtahi, former Reformist official who worked in the Mohammad Khatami administration, tweeted, “The leaked audio of Zarif has no election use for conservatives. Whatever they say to Zarif for these comments, it will increase his base if he chooses to run.” A number of other Iranian social media users questioned the release and the upcoming presidential election. The strong anti-Russia sentiment and frustrations with the IRGC will certainly play well with large segments of the public if Zarif ever decides to run or have an influence on who the next president will be. Ironically, in the audio itself Zarif says, “I will not allow you to publish this in order for me to get votes,” knowing that the statements themselves help him.

Conservatives have also responded. Hossein Amir Abdollahian, the former foreign minister for Arab affairs, rejected the claim that Soleimani was opposed to the nuclear talks, tweeting that Soleimani was “a great supporter of diplomacy.” He added that Soleimani considered “the battlefield and diplomacy as two pillars protecting the interests of the Islamic Republic.” Other conservative accounts noted that former Trump era Secretary of State Mike Pompeo tweeted approvingly of the leaked Zarif audio.

Regardless of the comments and the motivations, it was clear Zarif made these comments for the sake of posterity and even absolving himself of his shortcomings. An Iranian journalist summed up the situation nicely, tweeting, “What I see from the audio of Zarif is that a foreign minister is unaware of his prime responsibility, meaning foreign policy, and he has lost control of it. Right or wrong, he has a complaint and privately recorded this for history by saying it.”