Iranian President Hassan Rouhani, who had advocated diplomacy with the West, has lost public support after the United States' assassination of Gen. Qasem Soleimani, giving hard-liners an opening they can easily exploit. 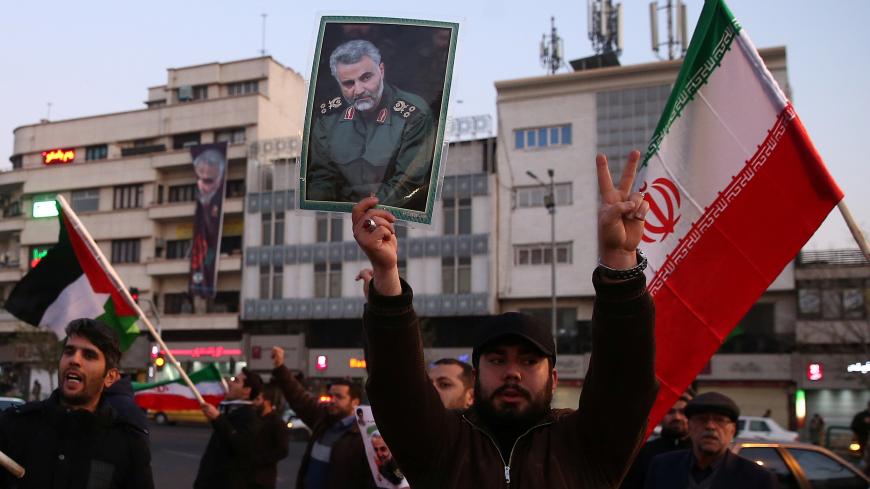 A man holds a picture of the late Iranian Gen. Qassem Soleimani as people celebrate in the street after Iran launched missiles at US-led forces in Iraq, Tehran, Jan. 8, 2020. - Nazanin Tabatabaee/WANA via REUTERS

Soon after taking office, US President Donald Trump adopted policies that led to the strengthening of Iranian hard-liners. With the Jan. 3 assassination of Gen. Qasem Soleimani, he laid the ground for the near-total marginalization of the Reform movement and President Hassan Rouhani.

In domestic politics, Soleimani, commander of the Islamic Revolutionary Guard Corps' (IRGC) Quds Force, actually held moderate positions. Now, to take advantage of his killing, Iranian hard-liners are painting him as an ultraconservative aligned with their own interests. Their strategy could end up tarnishing the image of Soleimani, who was regarded as a national hero among diverse segments of Iranian society.

Trump bragged about how he had ordered Soleimani’s assassination in Baghdad, while the general was on an official visit. His boasting closed the doors to diplomacy, while making Iranians even more cynical about the US administration. In fact, the establishment controlling Iran's political system can’t even consider sitting at a table with Trump representatives one day in the future, as it would lose face with its main backers among the religious class in Iran.

Nonetheless, the hard-liners and establishment figures welcome the current atmosphere, as they see the possibility of Soleimani’s assassination leading to the resounding defeat of Rouhani’s moderate foreign policy approach. Staunch conservatives argue that Rouhani’s policies — including negotiating with the United States in reaching the Joint Comprehensive Plan of Action (JCPOA) in 2015 — have been humiliating for Tehran. In a direct swipe at Rouhani, the hard-line activist Mehrdad Bazrpash assertd on Jan. 10, “Between the dignity and humiliation, [Soleimani] chose the dignity and thus became dear in the hearts and minds of the people.”

As president, Rouhani has been striving to improve and maintain Tehran’s relationship with the West, but Trump's ascendance and then reneging on the JCPOA have increasingly weakened Rouhani. If a figure like Trump's predecessor, Barack Obama, were in office and implemented the JCPOA as agreed, Rouhani and the Reformists, who support him, would have a level of support sufficient enough to ward off opponents daring to obstruct their policies, including restoring ties with Washington.

As the result of Trump’s Iran policies, however, no one in Tehran has the courage to speak about the advantages of negotiation let alone suggest a new round of talks with the United States. Under the current circumstances, Iran’s domestic politics are under strict scrutiny. For instance, hard-liners reacted harshly to a letter from a number of Reformists merely advising against seeking military revenge for Soleimani’s slaying for fear it would lead to a war they described as a “trap by American-Israeli warlords.”

In reality, even speaking about peace with the United States is considered a sin in Iran, and advocating such thoughts could be costly. Hassan Abbasi, a hard-liner linked to the IRGC and known for his fierce rhetoric against Reformists and Rouhani, was reported as declaring on Jan. 7 that reformists risked being killed in the streets and cut into pieces.

Such an environment makes it difficult for Rouhani to find a pretext or even perhaps the will to talk about diplomacy with the United States. He has no choice but to go along with what the establishment outlines.

At this point, the Reformists and moderates have been so undermined that their priorities appear to be shifting, putting the avoidance of war ahead of other matters. Hence, they and Rouhani dare not call for political and social freedoms for the time being. Rouhani had put all his eggs in the foreign policy basket in pursuing big deals, starting with the JCPOA and theoretically others following from that, assuming that resolving the long-standing dispute with the United States would lead the majority of Iranians to get behind him in other efforts. He might have been right, but the US withdrawal from the JCPOA and constant obstructions throw up by diehard conservatives’ positioned him as having failed. The hard-liners and the establishment now have the power to easily dismiss the Reformists without cost.

All this does not, however, mean the public wants the hard-liners in power, but the situation certainly could permit radicals in Iran to pursue what they want. They are now sufficiently confident that they can at the least convince their base that the moderate approach has not only failed to produce results, but has actually harmed Iran.

Secretary of State Mike Pompeo and other senior US officials have stated that Trump was sent by God to lead. Iranians heard that same kind of language from the hard-line entourage backing former President Mahmoud Ahmadinejad. Might Pompeo have been right in some regard?

Trump has indeed been a “divine gift” to Iranian hard-liners, an American president who keeps on giving. The hard-liners, who had lost face among ordinary people in Iran, have experienced a revival that began during the first days of Trump’s presidency, while the Reformists and Rouhani, who had been enjoying a good deal of public support, saw their standing decline. Thus, as the Reformists and moderates, including Rouhani himself, are further marginalized in domestic politics, Iran is likely to move forward based on policies advocated by the hard-liners.