How Trump is uniting Rouhani and Iran's Revolutionary Guards 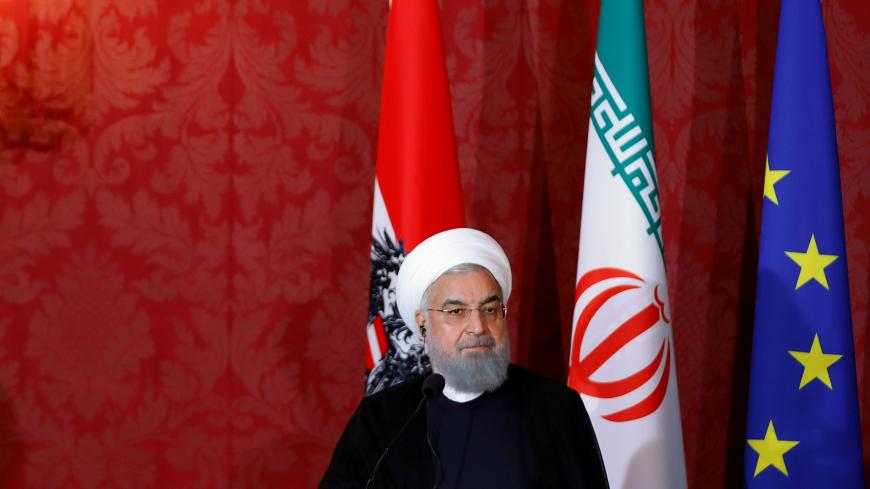 Hassan Rouhani's recent toughening of his posture toward the United States and Israel has led his conservative rivals in Tehran to embrace him and stop their onslaught on the moderate Iranian president.

On July 5, Rouhani received an unexpected letter from Maj. Gen. Qasem Soleimani, the commander of the Quds Force, in which the president was praised for his stance against Israel and the US reimposition of sanctions targeting Iranian oil exports. Soleimani wrote, "This is the same Dr. Rouhani whom we knew and know, and who must be," adding, "I will kiss your hand for your timely, prudent and correct statement, and we are ready for any policies that are in the interest of the Islamic establishment."

Observers view the letter as highly important in terms of domestic politics since Rouhani and Soleimani have not exchanged such cordial words since the moderate president first took office in 2013. In fact, leading conservative analyst Abbas Salimi Namin claimed July 7, without elaborating, that Soleimani had recently criticized Rouhani over one of his stances at a gathering and that the president had apologized to the major general.

As such, the Quds Force commander’s letter seems to be a signal of unforeseen unity between the Rouhani administration and the military establishment.

The president’s cultural adviser, Hesamoddin Ashna, tweeted July 4, "The general's letter to the president is the most important proof of absolute coordination between the military force and the political management of the country under the leadership of the [supreme leader] in line with any policy in the interest of the Islamic establishment."

During his re-election campaign last year, Rouhani targeted the Islamic Revolutionary Guards Corps (IRGC), giving constant speeches against the force, mainly over its involvement in the Iranian economy. After the May 2017 elections, which handed the incumbent another term, senior IRGC commanders went to the presidential palace to talk Rouhani into stopping his criticism of military organizations and eliminate the tensions. Saadollah Zarei, a political analyst with the hard-line Kayhan daily, wrote in July 2017 of the meeting, "From what I have heard, the IRGC explained compassionately and reasonably [to the president] that the government's tone harms the establishment, the people and the government itself, and they asked the president to prevent the government from [adopting] a tone against the Islamic Revolution and national interests."

In the wake of the meeting, Rouhani and the IRGC took a more reconciliatory tone toward each other and sought to ameliorate their mutual criticisms. However, the conservatives and hard-liners did not seem to care much for the arrangement, instead stepping up their harsh criticism of Rouhani.

The conservatives’ effort to unseat Rouhani reached its climax when prominent figures of the camp, such as Asadollah Badamchian, a senior member of the Islamic Coalition Party, called for the president’s resignation and early elections.

Now it seems that Soleimani's unprecedented letter has acted to send a strong message to the conservatives and hard-liners — who have never tired of attacking the administration over the past five years — to cease their sniping against Rouhani, who is under great pressure from both internal and external forces, and instead begin cooperating and backing the government.

Mohammad Reza Bahonar, an influential conservative, said July 5, "Gen. Soleimani has given the message to all the political groups to be pioneers in supporting the good positions and performance of the government, and instead of concentrating on disagreements, we should invest in shared areas [of interest]." He added, "Undoubtedly, this can serve as a model for other political institutions, currents and political figures in Iran that [now] … is the time of cooperation and convergence."

What should be noted here is that by "all the political groups," Bahonar clearly refers to conservatives and not Reformists, who have backed Rouhani since his election in 2013.

What may have persuaded Soleimani to write the letter, which has angered the younger generation of hard-liners, are the rising threats of US President Donald Trump and Saudi Arabia's Crown Prince Mohammed bin Salman against the Islamic Republic. In May, Trump fulfilled his campaign pledge to withdraw from the nuclear deal, and is now pressuring other states — including US allies — to stop importing oil from Iran.

Zarei, who is close to centers of power, said July 7, "For months, the enemy has been promoting [the argument] that the largest opponent of the government is the IRGC and that it wants to overthrow the government and, unfortunately, some [inside Iran] unknowingly [pursued] the enemy's [goal]. Soleimani’s message showed that when it comes to national interests, the Islamic Revolutionary Guard Corps will stand alongside the government as its most powerful supporter."

Moreover, welcoming Rouhani's "change of positions," hard-line Vatan-e Emrooz noted July 7 that Soleimani wrote the letter to the president owing to the current "sensitive condition" of Iran. The daily added that what is important for the Quds Force commander is the state of the country and the interests of its people.

Yet the prospect of a rapprochement between Rouhani and the hard-liners could spark other problematic dynamics. For instance, such a development could trigger tension with Reformists and their gradual distancing of themselves from the president. This scenario has been noted by prominent conservative analyst Naser Imani, who said July 8 that the Reformists are slowly separating themselves from Rouhani and the collapse of the nuclear deal may force Rouhani to increase his convergence with the conservatives. "The Reformist current had tied its existence to the JCPOA [Joint Comprehensive Plan of Action] … but now that the fate of the JCPOA is unclear, the political currents are adjusting themselves," said Imani, adding, "The Reformists were supporting the JCPOA and not Rouhani. Now that the JCPOA is [close to failing], their support for Rouhani has come to an end. The conservatives are sensing that the government shouldn’t be left alone, as it is not in a good position politically."

Thus, it seems that what few thought would ever occur is taking shape — namely, a convergence between Rouhani, the IRGC and the conservatives — and the direct reason for the formation of this unexpected triangle is the increasing threats of Trump and his regional allies. The ultimate outcome is clear: The moderate president’s smile diplomacy may soon disappear.