In its final weeks, the Obama administration and its European allies are trying to convince the emerging Trump team that the deal is working. 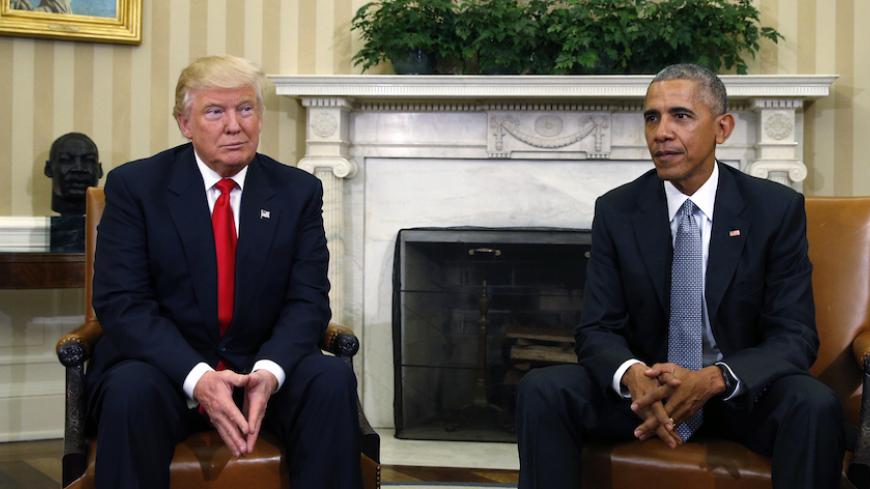 WASHINGTON — The Barack Obama administration and European allies are trying to buy time for the Iran nuclear deal, working to resolve any technical ambiguities in the accord and trying to make the case to the emerging Donald Trump team that the deal is working and renegotiating it is not a viable option.

The nuclear deal “is a decent deal … it works,” a European diplomat, speaking not for attribution, said Dec. 14, conveying the message European governments have conveyed to US interlocutors in recent weeks. “When issues come up” — technical ambiguities in the agreement, for instance — “we are able to resolve them. … As of today, the deal is implemented in the correct manner.”

“Why would we want to disregard something that can give peace a chance?” the diplomat said.

“If the US walks out, it may well be alone,” the diplomat added. “If the failure of the deal is because of the US, it should not expect the Europeans to do the same.”

While the Obama administration increasingly thinks it is unlikely, if not inconceivable, that the Trump administration comes in and rips up the Joint Comprehensive Plan of Action (JCPOA), it worries about other scenarios that could strain the year-old nuclear accord and derail years of effort to put US-Iran relations on a less confrontational footing. Paradoxically, trying to renegotiate the deal to strengthen it could cause the erosion of the international consensus that undergirds it.

In its final weeks, the outgoing Obama administration is trying to leave the Iran deal in healthy condition. It is working to resolve any technical ambiguities, mostly resulting from differing interpretations of the text of the landmark deal, a senior US official said. It has also sought to soothe Iranian anger over the renewal last week of the Iran Sanctions Act (ISA), which Obama pointedly did not sign when it passed into law Dec. 14 after the Senate voted 99 to 0 in favor of renewing the legislation. Secretary of State John Kerry also called Iranian Foreign Minister Mohammad Javad Zarif on Dec. 15 to say he had signed waivers of relevant sanctions under the ISA. Zarif still demanded the Joint Commission meet to discuss what Iran has publicly said they consider to be a violation of the JCPOA.

“I have communicated to Iranian Foreign Minister Zarif and to our P5+1 counterparts that while the existing waivers are unaffected by the extension of ISA's sunset and do not need to be renewed at this time, I have done so today to ensure maximum clarity and convey to all stakeholders that the United States will continue to uphold our commitments under the JCPOA,” Kerry said in a Dec. 15 statement.

The eight-nation Joint Commission overseeing implementation of the nuclear accord is due to meet Jan. 10 in Vienna, 10 days before Trump’s inauguration. Meanwhile, International Atomic Energy Agency (IAEA) chief Yukiya Amano visited Iran last weekend, publicly expressing confidence that Iran is abiding by its JCPOA commitments, while privately conveying messages to ensure Iran does not test any limits on ambiguities in the deal as the new US administration comes in.

“We are satisfied with the implementation of the [agreement], and hope that this process will continue,” Amano told reporters in Iran on Dec. 18. “Iran has been committed to its engagement so far and this is important.”

Russia — with which Trump has said he wants to pursue better relations — has also weighed in forcefully in favor of preserving the landmark nuclear deal.

It would be “unforgivable” if a deal over Iran's nuclear program was lost, Russia's Foreign Ministry said Dec. 15, while expressing disappointment with renewal of the US sanctions legislation.

“We don’t know” how much strain the JCPOA is under as a direct consequence of the US election, said a senior US administration official, speaking not for attribution. The scenario that is perhaps least likely is that the new administration outright tears up the deal, which would invite a crisis it doesn’t need, the senior official said.

The new Trump administration may feel pressure to “fix” the deal or signal that it will be strictly “enforcing” the deal “for the first time.” But he considers the “tear up scenario highly unlikely,” the US official said, with the caveat, “unless the Iranians do something so provocative, it creates a firestorm and pushes the administration into a massive snapback.”

Trying to “fix” the deal is a more likely scenario: The paradox is that in an attempt to strengthen the deal, it will cause its erosion. The next administration might be convinced to build outside pressure to bring the Iranians to the table to fix certain things — the length of the deal, for instance. They may cause the deal to collapse by poking the Iranians over and over again until they pull out. This could happen with legislation that reimposes secondary sanctions under some new justification — arms shipments to the Houthis or bags of cash to Hezbollah or ballistic missile tests, for instance. The Iranians could argue that is a reimposition of nuclear sanctions.

The Iranians may not immediately pull out, “but play the victim” to try drive a wedge between the United States and the Europeans, Russians and Chinese, the senior US official said. The Iranians might urge the Europeans to ignore the secondary sanctions and dare the Trump administration to start a trade war. In the interim, the Iranians might push the outer limits of the deal, creeping past some limits.

Another concern: The deal could erode if the Trump administration just does not focus on it, not pushing back on overzealous congressional legislation, for instance.

The nuclear deal could also become collateral damage to the Trump administration’s expressed desire to push back on Iranian destabilizing activities in the region. Confrontations in the Strait of Hormuz could trigger an action-reaction spiral that could take on a dynamic of its own and could become hard to contain.

While the Trump administration may not set out to kill the JCPOA off the bat, “They are not invested in it at all,” former Obama administration nuclear negotiator Richard Nephew said. “My biggest fear is they push back on Iran on regional issues, the Iranians respond by walking back from the JCPOA or do things that call into question the JCPOA, [and] then we are on an escalatory path that we can’t control.”

“Bottom line: I still think it is in a lot of trouble,” Nephew, now with Columbia University, told Al-Monitor. “I will be surprised if the JCPOA survives the [Trump] administration.”

“All the signals I am hearing from the people advising the Trump administration are that they are not saying kill it on Day One. They understand that is damaging,” Nephew said.

The Trump administration may “leave it in place, then go after them [Iran] hard on regional issues. That is what I think they [Trump administration officials] will probably do,” Nephew said, adding, however, that he does not rule out that US officials might try to renegotiate the nuclear provisions. “Either one of those” — clamping down on regional stuff or trying to renegotiate the nuclear provisions — “is going to put a lot of strain on the JCPOA.”

Figuring out who speaks authoritatively for the Trump administration on Iran policy may also be challenging given the differing expressed views of Trump’s emerging Cabinet, with Secretary of Defense nominee James Mattis having said the nuclear deal should stay, while Trump’s national security adviser Michael Flynn has expressed hostility to Iran and told interlocutors he wants a comprehensive policy for the Islamic Republic.

While their recent interactions suggest a chill, Kerry and Zarif have forged a functional communication channel that has been useful to head off crises, such as when Iran’s Islamic Revolutionary Guard Corps detained US sailors who had inadvertently crossed into Iranian waters in January. Kerry contacted Zarif, who was able to get the sailors released within 24 hours. While Kerry can hand off phone numbers and email addresses to his successor, it is not clear who can speak authoritatively for the Trump administration on Iran policy, Nephew said.

“I think ultimately on this, Kerry will leave [Trump’s secretary of state nominee Rex] Tillerson with a notepad full of telephone numbers,” Nephew said. “The ops people at State still have capacity to reach out and touch Zarif.”

He added, “The real issue is will they have the authority to speak on behalf of the Trump administration on Iran policy for an administration that looks like it will be torn in four different directions.”

“We [the Obama administration] had a lot of cohesion, and even we screwed up from time to time,” Nephew said. “These guys are going to be siloed. … There are eight different visions that are potentially on the table here, and they are all to some degree mutually exclusive.”