Want to call Erdogan a dictator? Get ready to hire some lawyers 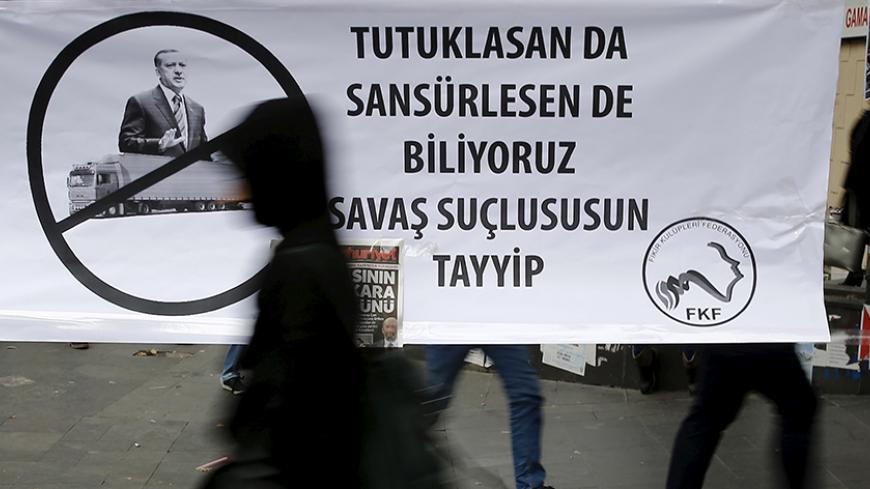 During a protest in Ankara on Nov. 27, 2015, over the arrest of journalists Can Dundar and Erdem Gul, a woman walks past a banner that makes reference to the arrests of journalists and the censorship of media and calls Turkish President Recep Tayyip Erdogan a war criminal. - REUTERS/Umit Bektas

The daily Hurriyet’s magazine supplement posted Nov. 13 a web-only article headlined “13 Reasons for Bad Luck Associated with Friday the 13th.” The piece was not political and was illustrated by a photograph of Leonardo da Vinci’s famous “Last Supper.” Upon closer inspection of the image, however, one saw it had been digitally altered to have President Recep Tayyip Erdogan seated to the right of Jesus. In a public apology to Erdogan, Hurriyet said it had removed the image from its Web page within minutes of its posting and immediately fired the editor, Aynur Karabel, and the director of Web page content, Sermin Terzi. It also said the use of the photo had been an unacceptable oversight.

For the two fired journalists, the ordeal is far from over. News broke Jan. 25 that prosecutors had filed suit against Terzi and Karabel for offending the president. Both assert that they did not realize Erdogan’s image had been placed into the visual. Because the article had nothing to do with politics, they had no intention or reason to use such an image. The prosecutors claim, however, that the image is offensive regardless of purpose or accidental use.

That same day, an investigation was launched against CNN Turk, which had reported on opposition leader Kemal Kilicdaroglu calling Erdogan a “sham dictator.” In reporting this news, the TV network had put quotation marks around the word “dictator” when it used the subheadline “‘Dictator’ Under Investigation.” CNN Turk, which was simply trying to report on the word “dictator,” now finds itself in the crosshairs of the Turkish legal system.

These two cases should come as no surprise to regular readers of Al-Monitor’s Turkey Pulse, given that several columns have reported on how quick to anger Erdogan and his men can be. The cases have naturally generated commentary on social media and among pundits, with sober analysts arguing that it is counterproductive for a politician not to allow anyone to call him a dictator, and that he should instead give up acting like one.

Indeed, in October, a court in Eskisehir province acquitted four college students for referring to Erdogan as a dictator. The students had hung a banner stating “Dictators Are Toppled in the Streets,” with Erdogan’s image looming in the background. Their acquittal only increased the salience of the “D-word” for Erdogan and his supporters, who relish defending Erdogan in their overwrought anxiety.

Indeed, when Turkish political discourse is examined from a distance, one sees that it has become a vicious circle: The more the Justice and Development Party (AKP) idolizes Erdogan and tries to justify his dominance of the legislative and executive branches, the more suspicious and frustrated they become. Hence, every cartoon, question or social media post becomes a potential source for offending Erdogan. In turn, Erdogan's supporters relentlessly compete among themselves to punish critics.

Yet, these two latest events go beyond new and creative ways to silence opposition. There is no political opposition inherent in them. The “Last Supper” episode was most likely an oversight by exhausted journalists, and CNN Turk employed a standard method of reporting to explain the Kilicdaroglu court case. The latter marks a turning point in Turkish politics from sufficiently silencing the political opposition. Is the next step to control every detail — the images, the words and any possible signs of discontent?

Pinar Dag, a seasoned journalist and an expert on data journalism, told Al-Monitor, “To consider this subheadline on TV as an offense to the president is intervening in news reporting through the threat of the courts. Maybe it is a naive wish given the times, but the president's press advisers should have reacted to this case in the name of freedom of the press. The channel [CNN Turk] has been tarnished for a while, causing changes in its policies. But to turn such instances into court cases is almost like mocking the state of law. Everyone knows those were the opposition leader’s words, so why bother with [such petty issues] when Turkey has real deep-rooted problems? This is just muddying the waters, simply an operation aimed at our perceptions.”

Kerem Efe Sozeri, an analyst who researches the media, emphasized the importance of a growing segment of the population that praises such restrictions on freedom of expression. He told Al-Monitor, “We are a society of two parts now: traitors and reasonable citizens. These two images [the CNN Turk subheadline and digitally altered ‘Last Supper’] are signs of our transition to authoritarianism. While the AKP was struggling against the military establishment, it was a political struggle. This one now is a cultural one. Gradually we are all getting accustomed to the state's language influencing not only what we should say but how we should think.”

Yusuf Salman, an independent analyst and media scholar specializing in minority media and speech policies, told Al-Monitor, “So far, I have counted about 1,300 court cases for offending Erdogan, and most of them have been rather random and arbitrary. The trend has been to prosecute ordinary citizens. In the coming months, we may see a change whereby more academics, lawyers and politicians are prosecuted. Is there a strategic reason for the AKP to hit the brakes on its rage?”

Indeed, that might just be the crux of the matter. The angrier Erdogan gets, the more he is revered in Turkey. The more his supporters are convinced that enemies of the state are targeting Erdogan, the more they rally around him, declaring their unconditional support. Now that most of the opposition has been duly silenced, and one rarely hears the voice of opposition leaders on TV — from which most of the Turks get their news — the focus may now be on eliminating certain words from public usage.

News reporting, not only words but also images, is seen as dangerous. One analyst working for pro-AKP media said in confidence, “So it doesn’t matter whether CNN Turk itself called Erdogan a dictator or [only] reported the news. They had his photo, and underneath it it read ‘dictator’ on the screen. Do you think the average Turk pays attention to the quotation marks?”

When asked whether the court cases will bring additional attention to the D-word being associated with Erdogan, the pundit replied, “Well, that is good. If the Turkish public sees that their leader is being disrespected, they will stand in front of him and protect him. So yes, everyone should see those who are offending the state.” Thus, unsurprisingly, the case was widely reported on pro-AKP outlets.

The anonymous pundit is correct, and thoughts similar to hers are echoed daily on numerous TV channels. As the political opposition is muzzled, and ideas sanctioned, the new frontier for the AKP’s propaganda machine will be certain words and images. If the words and images are scrutinized harshly enough, the Turkish public will get two messages simultaneously. First, Erdogan is under attack by traitors and must be defended, and second, what is politically correct in the Turkish domain is being redefined. The AKP’s public relations experts know well they cannot erase unpleasant words from the dictionary, so for the time being they will shrewdly turn the table for domestic consumption.