Young female politician Canan Kaftancioglu is perceived as the reason for Erdogan’s loss of Istanbul after 25 years and the president is determined to see her punished. 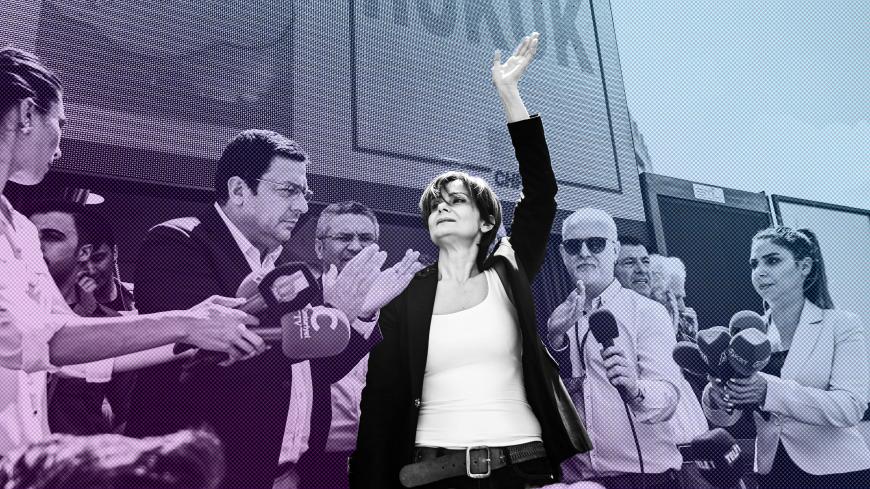 Do you have a social media account? Do you remember what you posted six or seven years ago? Now imagine a court case where prosecutors are asking for up to 17 years in prison for your tweets from almost a decade ago. Legal and online harassment are expected for any leftist female politician. Offending Turkish President Recep Tayyip Erdogan has become the quintessential charge against everyone who dares to express a critical opinion.

This is the story of a young brave female opposition politician, Dr. Canan Kaftancioglu, provincial chair of the Republican People’s Party (CHP) for Istanbul. The court case that was brought against her is an act of revenge by the patriarchy in Turkey against a strong-willed, independent and successful female politician. When I interviewed Kaftancioglu for the first time in May, she was busy reorganizing the opposition because the CHP’s first Istanbul mayoral victory was annulled. She was focused and hopeful. Kaftancioglu is one of the most important figures behind the CHP's phenomenal success.

Erdogan, being the savvy politician he is, must have seen how dangerous Kaftancioglu can be to his 25-year reign in Istanbul before most Turks knew her name.

“Just 48 hours after I was elected chair,” said Kaftancioglu in our second interview, “an investigation was launched against me.” Kaftancioglu was elected on Jan. 13, 2018. The prosecutors started the investigation on Jan. 15 and Erdogan gave a disparaging speech about her at the parliamentary gathering of his Justice and Development Party (AKP) on Jan. 16. Erdogan did not utter Kaftancioglu’s name but posted her alleged tweets on a screen, accused her of offending the values of the nation and disrespecting the state and called her election a “total disaster.” In a boastful display of masculinity, Erdogan exclusively addressed CHP chairman Kemal Kilicdaroglu and said, “Tell me who your friends are and I will tell you who you are.” Erdogan spent over 10 minutes reading out each Kaftancioglu tweet and comment as his fellow AKP members booed and chanted slogans.

Watching the video after reading the case files, one sees Erdogan took Kaftancioglu’s political presence as a personal challenge from day one. Erdogan’s strongman policies must have seen tenacity in Kaftancioglu, who is frequently described among AKP elites as a “tough woman.” Erdogan also must have thought Kaftancioglu’s strong stand on controversial issues such as the Kurdistan Workers Party (PKK), the Armenian Genocide and the Gezi Park protests could prove to be the Achilles' heel of the opposition. The two back-to-back Istanbul elections have shown that what was assumed to be the weakest link for the opposition was indeed the backbone of its victory against the AKP's well-oiled electoral machinery in Istanbul. Kaftancioglu is the woman who kicked the hornet’s nest in Istanbul, and now the judiciary wants to stop her.

After Erdogan’s speech the pro-AKP media jumped on the bandwagon as expected and routinely discussed the “Kaftancioglu crisis,” hinting that it would be better for the CHP if she were not an active player. Kaftancioglu said, “The day the prosecutors started the investigation, Erdogan put in a complaint as well. That was immediately added to the case. I was the target of a brutal witch hunt that was built around hollow allegations and lies since the day I was elected.” Tech-savvy activists turned to social media to explain how several tweets and images that seem to taint Kaftancioglu’s reputation had been photoshopped.

Al-Monitor spoke with a senior member of Kaftancioglu’s legal team, Yaman Akdeniz, a professor of law at Istanbul Bilgi University. He said, “Kaftancioglu is facing five separate charges with regard to 35 tweets going back to 2012 and her prosecution can only be described as a political trial. It is then not a surprise that the criminal investigation was initiated on the day Kaftancıoglu become the Istanbul provincial head and since then, this has become a political persecution with the purpose of restricting or preventing her ability to take part in politics in Turkey.”

As a legal expert, Akdeniz explained the confusing allegations against Kaftancioglu. He said, “So far as her tweets are concerned, they all include political criticism of the president of Turkey as well as critical speech with regards to certain political developments at the time, including with regards to Gezi. Whether you like them or not, they all are within the limits of freedom of expression and amount to political speech.”

And here is the main problem with this court case: Political speech, especially coming from a young female politician, is not protected in Turkey. To the contrary, she is labeled extreme and every possible course of action is taken to block her political participation. Kaftancioglu presents a scary image for Erdogan and his conservative alliance because she is an intellectual who is not an elitist. Coming from humble beginnings, Kaftancioglu completed a successful education and is a medical doctor by training. In a system that purges intellectuals as enemies of the state, Kaftancioglu speaks the simple language of the people and understands their day-to-day concerns. She doesn’t mince words and is respected for it by the public. It was the crux of her successful Istanbul campaign and her ability to mobilize a diverse grassroots movement to work as volunteers for election monitoring.

Let’s take a look at some of the themes of Kaftancioglu’s tweets that Erdogan labeled as offensive. They are critical of police brutality during the Gezi protests. She openly mourned for Berkin Elvan, a 14-year-old shot to death during the crackdown. The value of human life: Kaftancioglu argued that the assassination of three women in Paris (one of them PKK founder Sakine Cansiz) was wrong. She spoke about April 24, the day the Armenian Genocide started. In a political system where only praise for the government is expected, Kaftancioglu’s statements are not acceptable. Erdogan and the pro-AKP media relentlessly ask why the CHP leadership does not silence her.

Kaftancioglu calmly explained, “This is not a legal but a punitive case. This is not a case against me as an individual. It is a case that aims to prosecute those who support human rights, democracy, separation of powers, supremacy of law, freedom of expression and secularism. It is one part of the operation to silence opposition by those who got Turkey into an economic, social and political crisis. Therefore, this is a case where justice is on trial.”

Not just Kaftancioglu but also here immediate family members have been subjected to media lynching. It is hard to comprehend the pressure Kaftancioglu and her family are under, but at one point Kaftancioglu went in front of the camera to explain the reasoning behind a pork chop photo from her husband’s social media account. This is only one example of the hardships of seeking political power while female in Turkey. Female participation in politics is traditionally low and is not progressing under Erdogan’s new presidential system. For instance, in the last municipal elections, only 2% of AKP candidates were female. Although Erdogan has nominated a handful of women to ministerial cabinet posts, their political legacy has been modest. In a patriarchal system, a conflation of "manly" and "competent" can be expected, and Erdogan has several times repeated his yearning and appreciation for stay-at-home-mom figures, highlighting that men and women could never be considered equal.

In February, when asked why the CHP does not have more female figures, Kilicdaroglu confessed there is a pattern of reluctance by women to be in positions of power, saying, “Our female colleagues suggest male names for candidacy.” The boorish reception Kaftancioglu received after her election gives us clues as to why hard-working women might shy away from politics. How many women have been lost to the Turkish political scene even before they dared set foot in it, watching Kaftancioglu's case? Machismo and misogyny help patriarchal politics continue unchallenged.