The ruling appears to be a pattern of similar events befalling political rivals of Turkish President Recep Tayyip Erdogan ahead of the 2023 elections. 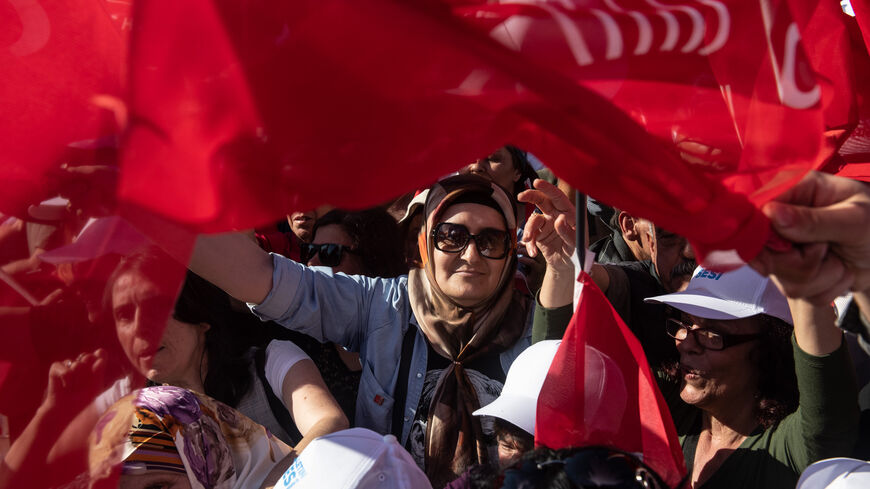 Supporters of Turkey's main opposition Republican People's Party cheer as they wave flags during a rally on May 21, 2022, in Istanbul, Turkey. - Burak Kara/Getty Images

On June 14, Turkey’s top appeals courts announced that CHP party leader Canan Kaftancioglu’s political party membership was ended. Kaftancioglu, head of the Istanbul branch of the main opposition Republican People’s Party (CHP), is known for her ability to organize and expand the party’s grassroots. She is seen as the leading player behind the CHP landmark victory in the 2018 local elections. Kaftancioglu was tried on charges of offending the president and the state over tweets posted some eight years ago. A Turkish court sentenced her in May to four years and 11 months' jail time along with a political ban. She avoided prison time as her sentence was less than five years.

The CHP leadership and supporters rallied around her. The party's leader Kemal Kilicdaroglu denounced the ruling, saying that the party did not recognize the ban, which forbids Kaftancioglu from engaging in any political activity.

On June 14, the top appeals court invalidated her membership, putting Kaftancioglu’s post as Istanbul chief in limbo. Yet Kilicdaroglu and Kaftancioglu have remained defiant and maintained their positions.

Turkish democracy has long suffered from party closures, imprisonment of party leaders and even execution of politicians. Erdogan himself had to serve jail time for four months in 1997.

Now, Turkey has become notorious for removing opposition politicians from their elected positions with its complex legislation specifically criminalizing offenses against the president and the government. Yet several legal experts find the rulings legally controversial.

“It is impossible to explain or justify how these decisions were reached from the perspective of law,” Levent Koker, emeritus professor of public law, told Al-Monitor.

“The courts have no jurisdiction to make such a decision. The entire process of the court is against the laws. My personal conviction is that the wish to keep Kaftancioglu out of politics is so overwhelming that laws are ignored for this cause. And we are facing a series of haphazard decisions,” he told Al-Monitor.

Koker also challenged her conviction over a couple of tweets. “These rulings are an infringement of rights in accordance with the precedent of the European Court of Human Rights,” he said.

The AKP government has been engaged in a rigorous campaign to make its opposition invisible for a while now and as the 2023 elections near, these efforts can be expected to intensify. Analysts argue they have also to do with Erdogan’s diminishing electoral fortunes.

“Kaftancioglu is one of the architects of Erdogan’s biggest electoral defeat in 20 years with her sincere social democratic credentials and her ability and courage to appeal to Kurdish voters,” Giran Ozcan, executive director of Kurdish Peace Institute in Washington, told Al-Monitor. “The only way Erdogan can win the next election is if he is able to drive a wedge between the opposition bloc and the Kurdish electorate. One way to do this is to silence the progressive wing of the CHP.”

“This is a clearly political decision meant as Erdogan’s revenge against a woman who dealt him his biggest blow in recent years, and as a move to impede the CHP’s ability to mount an effective campaign in the upcoming elections,” Merve Tahiroglu, Turkey Program Coordinator at POMED in Washington, DC, told Al-Monitor.

"But these efforts are useless," Tahiroglu said. "At this point, she like many opposition figures, sees Turkey’s next election as a fight for the republic’s survival, and her role in that fight as a matter of national duty. She is going to lead the opposition through this election, one way or another.”

According to political scientist Burak Bilgehan Ozpek, some other motives were at play behind the political ban slapped on Kaftancioglu.

“I view this ban as an attempt to disturb the balance and synchrony between opposition parties. Kaftancioglu is close to the Kurdish movement and conservative groups do not see her positively,” he told Al-Monitor.

According to Ozpek, the ruling is aiming to gauge the reaction of conservative and nationalists who joined the CHP-led opposition bloc.

Ozpek believes the government will throw up more roadblocks to undermine the opposition alliance as the elections near.

"I expect this process to continue until the HDP is shut down,” he opined.

The next coming months all opposition parties and dissidents can expect harsh and arbitrary moves by both law enforcement and the courts.