The main opposition Istanbul chief criticizes the decision of Turkey's Supreme Electoral Board to annul the results of the Istanbul municipal elections, saying that official institutions should respect the choice of the people. 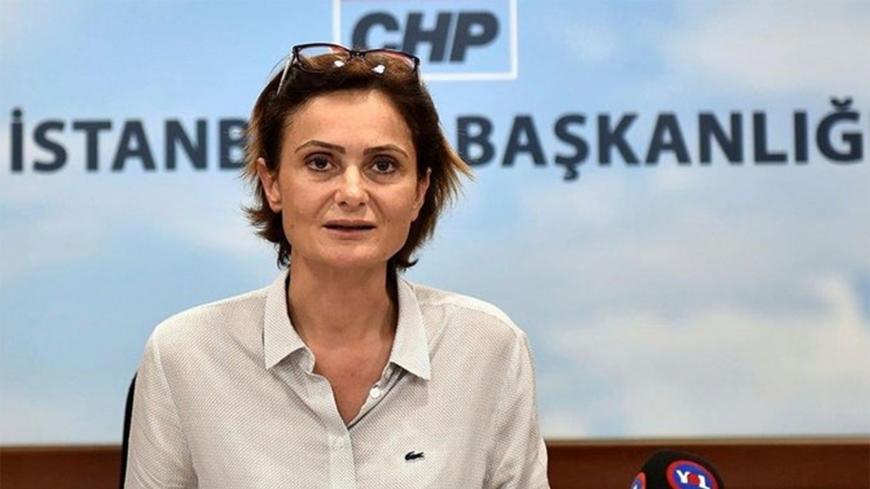 The provincial chair of the Republican People’s Party for Istanbul, Canan Kaftancioglu. Posted May 4, 2019. - Twitter/@dokuz8_EN

The most contested election of the last decade in Turkey has been for the position of Istanbul’s mayor. And, after 36 days of complaints from the Justice and Development Party (AKP), on May 6, the first day of Ramadan, the YSK announced a rerun of the mayoral election. However, opposition candidate Ekrem Imamoglu’s now annulled victory and his strong stand after the election won the hearts and minds of not just Istanbulites but of most Turks. Along with Imamoglu, there is someone else who deserves credit: Canan Kaftancioglu. Kaftancioglu is the provincial chair of the CHP for Istanbul.

Kaftancioglu is a medical doctor, mother, motorcycle lover and feisty politician who ran a campaign against the AKP’s 25-year rule in Istanbul. She has faced many challenges, including the generic “terrorist propaganda” investigations that almost all opposition figures have to endure. Yet Kaftancioglu did not stop tweeting or speaking her mind, angering President Recep Tayyip Erdogan and other AKP officials.

At a time when most observers dismissed opposition parties as ineffective, Kaftancioglu and her team have proven that despite all odds a victory at the ballot box is possible. She is known as hardworking, tenacious and determined. Her management skills resonate with the least expected at both the top levels of the organization as well as the grassroots. Kaftancioglu has gained the admiration of most skeptical pundits. In an era where women’s participation and voice in Turkish politics is dwindling, she has been a hope for millions.

Al-Monitor spoke with Kaftancioglu about her life, motivations and how she manages it all. What is impressive is her compassion for those who have no or limited access to education, health care and other essentials. One of the least mentioned reasons for Erdogan’s loss of Istanbul is Kaftancioglu’s strong empathy with the city’s poor and deprived.

Al-Monitor:  You are a medical doctor specialized in forensics and your thesis studied torture specifically. You were involved in grassroots politics as a college student. Why this interest in politics as a doctor?

Kaftancioglu:  I was born in Ordu [Black Sea province] and grew up in a conservative family environment with minimal financial resources in the 1980s. The only way out for me was to study hard and keep dreaming without limits. I didn't know about politics then, but I recall sharing the suffering of my friends who had to get married in middle school and stop their studies. My readings taught me that poor or rich, male or female, we are all equal. Yet for this we have to work. As long as I can remember, I sided with the righteous and the underdog rather than taking the easy way out by approving of [the actions of] the majority and powerful. If Mustafa Kemal Ataturk [founder of the Republic of Turkey] and his comrades had not saved our country, I could have been one of those girls who was forced to get married out of elementary school and be dependent on my husband’s financial support for the rest of my life.

I became a doctor because at the time most successful students opted for medical school. My dream was to study law. During my medical school years I was always involved in grassroots movements. I think the reason why I opted for forensic science as my specialty and focused on the implications of torture was because of all these experiences I had and the way I perceive the world.

The struggle in my early youth was a necessity and I did not ponder whether to get involved in politics. I worked with civil society organizations that focused on rights and democratic principles. After Kemal Kilicdaroglu became the chairman of the CHP [in 2010] I realized there was a possibility for change and hope for Turkey. That's when I decided to get actively involved in politics. I would like to emphasize that once I decided to become politically active, I did not strive to become someone prominent but rather accomplish our goals together with everyone in the party.

Al-Monitor:  What motivates you to work diligently and tenaciously despite all legal, financial and political odds being against you and your party?

Kaftancioglu:  My struggle in the party organization was to focus on ideas rather than people. We need to work to get our ideals to win offices. If you do not hold personal expectations as your main goal, but rather work for ideas you believe in, politics becomes easier. As a medical doctor and hospital administrator previously my main concern was to serve the people. Now in politics I hope to serve more people. This is what motivated me to get involved in politics; it gives me inner peace to have this goal.

My concern for people’s well-being is not limited to equality before the law. We need to provide equal opportunity to all without concerns of party identity, ethnic, religious or other differences. My goal is the widespread dream of most Turks today.

We have a bundle of complex problems facing us. The gap in the distribution of wealth, unemployment, limited access to services such as health care and education leads to people facing injustice on their own. Women are systematically ostracized from social and economic life, people cannot achieve self-realization, minors suffer abuse and drug use is on the rise — just to name a few of these problems. The most crucial form of violence is prolonged poverty of the masses.

We keep saying every person is born equal but the political system we live in forces on us inequality in every aspect. Our republic was formed to care for those who are in need without support of anyone. We need to establish a system where a child born in poverty in a remote corner of Turkey can dream about being a doctor, businessman, teacher or president and gets the chance to realize this dream. This was the goal of our founding fathers. This is the path we are on.

Al-Monitor:  When you were elected in January 2018, there was a certain opposition to your name both within and outside of the CHP. In a short time, you achieved remarkable success in the March 31 election. What is the secret of this success?

Kaftancioglu:  The hype was expected. I was a last-minute candidate nominated by the party organization instead of those who have been in the game for years. I utilized different methods to earn votes. I didn’t bargain with the delegates but rather I approached each one of them as a valuable human being. I did not repeat what most of the delegates want to hear but rather told them the facts and my beliefs. At the end of this process, the party won rather than just a candidate. The CHP’s establishment felt strongly that if we rest on the truth, on facts we can deliver results.

The criticism and attacks from outside is also much expected given the conditions of Turkish politics. We represent a language that rejects the obedience culture. We did expect that right-wing politics would be disturbed as we refuse to act within their standards on left-wing politics — that of “timid politics.” What really angered them was the realization that I am not scared. All dictators are most angered by the presence of people who are not scared despite all of their power — especially if that's a woman.

The CHP party establishment deserves all the credit in keeping election results in check. They put up a great fight with strong conviction and effort. Since I was elected, I emphasized that we will win the Istanbul mayoral seat. My team believed in this and carried on with this belief. That's precisely why they could survive night shifts in the cold [guarding the votes during the recount process] and attacks of right-wing Grey Wolves.

Al-Monitor:  We actually share our love for motorcycles. Yet it is rare for women in Turkey to ride motorbikes. How did you start?

Kaftancioglu:  Growing up in a time and place where riding bicycles was a taboo for girls, my love for cycling evolved into motorbikes. I think in a way I wanted to change the prejudice “women can’t drive well” into “women even ride motorbikes.” Yes it is a dangerous activity but it is also dangerous for a woman to walk home alone after dark or speak the truth without fear. It is as dangerous as any other activity you engage in in Turkey in the name of freedom. The only way to minimize the risk in all activities in the fight for freedom is to be more persistent in defending our rights and liberties.

Al-Monitor:  What would be good advice for outside observers analyzing the Turkish opposition?

Kaftancioglu:  Turkey is not just about the AKP or Erdogan. Remember that Turkey is home to different cultures. Since its establishment as a republic Turkey has turned its face to the West as it would like to have good relations with its neighbors for peace and stability. We are basing our social democratic policies on this solid foundation. We aim for development of our country. We strongly believe Turkish membership in international and regional organizations would help reduce tensions in this region.

Al-Monitor:  What is your take on the YSK’s decision?

Kaftancioglu:  Istanbulites went to the polls and made their decision on March 31; they chose Ekrem Imamoglu as their mayor. The people’s will and decision cannot be dashed by government agencies, which should not act as the stick in the hands of those in power. I invite everyone to follow the situation calmly and act in accordance with the decisions our party is going to take.