Canan Kaftancioglu, head of the CHP’s Istanbul branch, sentenced to nearly five years and barred from politics for insulting Erdogan and the Turkish government. 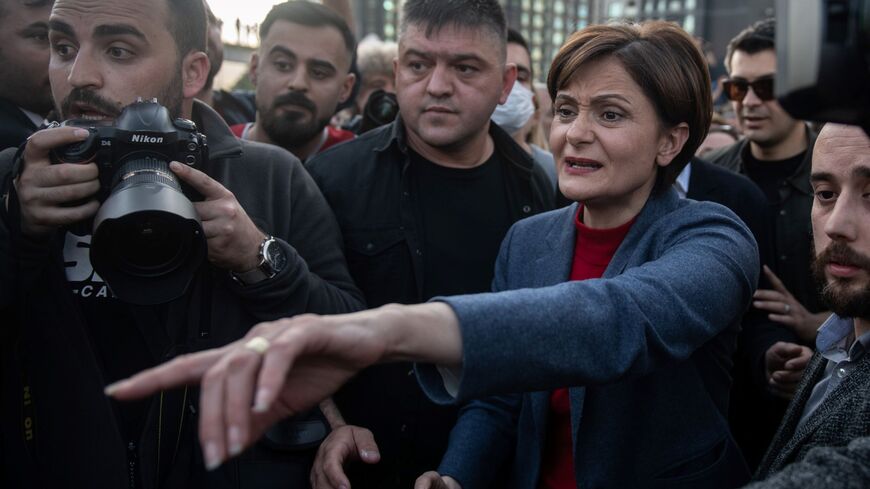 Turkey's main opposition Republican People's Party (CHP) Istanbul chairperson Canan Kaftancioglu greets her supporters as she arrives at the party headquarters on May 12, 2022 in Istanbul, Turkey. Turkey's top court upheld convictions and a jail term against her for insulting the president and the state. Kaftancioglu heads the main opposition Republican People's Party's (CHP) Istanbul branch and played a significant role in municipal elections in the city that saw the CHP take over the mayoralty, which had been held by President Tayyip Erdogan's AK Party for the last 25 years. - Burak Kara/Getty Image

Turkey's top appeals court today upheld a jail sentence of more than four years against prominent opposition official Canan Kaftancioglu on charges of insulting the president and the Turkish government. The ruling, which also barred her from politics, has raised further concerns over Turkey’s judicial independence in the leadup to the 2023 elections

Flanked by Kaftancioglu and Istanbul Mayor Ekrem Immaoglu, Kilicdaroglu said, “Canan is fearless, Canan is gallant, and Canan is ours. Let everyone know this,” in a televised speech.

“You’re a bully, you’re a manipulator,” he lashed out at Erdogan.“There is a whole public behind Canan, whom you are trying to punish. Don't forget that for a second," he added.

Hundreds of party supporters gathered outside of the party office chanted “Shoulder to shoulder against fascism.”

Kaftancioglu, head of the CHP’s Istanbul branch, was one of the most influential figures in the Turkish opposition’s sweeping local election victory in Istanbul in 2019. She is not expected to serve jail time as her sentence is less than five years, according to legal experts. The extent of the political ban has not been immediately clear, yet some legal experts have argued that the ban would not prevent her from maintaining her current position as an appointed official, but that she would be unable to hold any elected position in the party.

A Turkish court in 2019 sentenced Kaftancioglu to nine years and eight months in prison for five separate charges, including insulting the president and spreading terrorist propaganda due to her tweets in 2014. She remained free while her case was on appeal. The appeals court today turned down terror-related charges against her, but upheld the charges of insulting the president and the Turkish government and reduced her sentence to four years, 11 months and 20 days.

Her trial, which began days after CHP’s election victory, has been widely seen as part of Erdogan’s broader campaign to silence opposition figures, activists and journalists. Nacho Sánchez Amor, Turkey rapporteur for the European Parliament, described the ruling as “dark news” on Twitter.

The ruling came only a few weeks after a Turkish court handed heavy jail sentences to prominent human right activists, including Turkish businessman and philanthropist Osman Kavala, for charges deemed “specious” by the US State Department. On April 25, Kavala was jailed for life without parole and seven other defendants were given 18 years in prison.