Despite its security bluster, the Israeli leadership is increasingly leaving it to Israelis to defend themselves as the wave of violence penetrates the Tel Aviv "bubble." 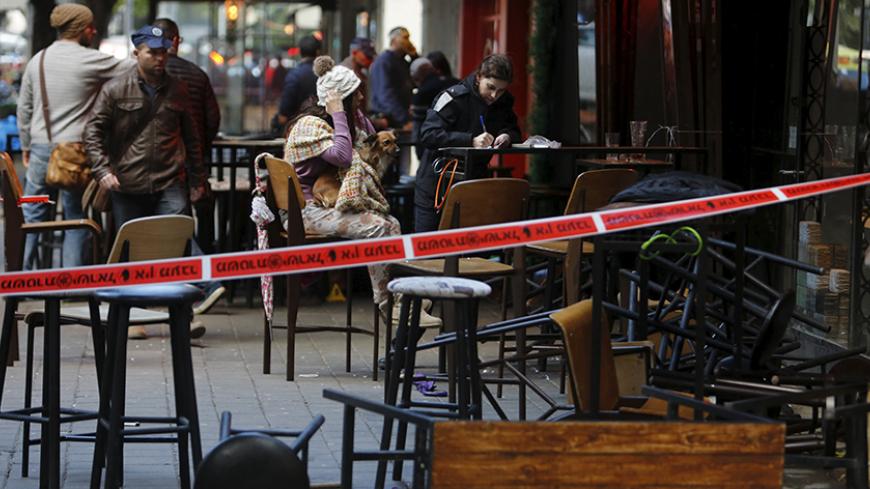 A police cordon is seen near the scene of a shooting incident in Tel Aviv, Israel, Jan. 1, 2016. A gunman killed two people and wounded at least three others in central Tel Aviv on Friday before fleeing, Israeli Police said, adding that the motive for the attack was unclear. - REUTERS/Nir Elias

The timing couldn’t have been worse. Just one day before the deadly attack on the Tel Aviv bar Jan. 1, The New York Times published a glowing account of how people could spend 36 exciting hours in the city. The piece described an open and secular city, where the LGBT community “seems to take precedence over Israel’s complicated politics.” Among the advantages described in the article were 300 days of sunshine a year, great bars, exciting nightclubs, world-class restaurants and lively flea markets.

The article offered a very accurate picture of life in the city. Tel Aviv is, after all, an icon of liberal, progressive Israel, a place where normal life can go on in the heart of the pressure cooker that is the Middle East. The “Tel Aviv bubble” is a derisive term used by other Israelis to describe people who live in the city. It implies that they are detached from reality, self-absorbed and focused on having a good time. Yet all these things are marks of normalcy.

The perpetrator who killed two young people and wounded several others managed to escape. Unsurprisingly, the fact that he wasn’t shot or at the very least captured sparked a wave of criticism against the people of Tel Aviv, who failed to “neutralize” the shooter. In the flurry of media reports on the day of the incident and after, Tel Aviv residents were even compared to Jerusalemites, who would never have let a “fiasco” like this one happen. After being subjected to months of violence, many people in Jerusalem now carry a gun, as do all the security forces spread across the city as a matter of course. That is why after just about every attack in the current wave of violence, the perpetrator was “neutralized,” a popular euphemism for captured or killed.

This kind of criticism targeting Tel Aviv shows how jumbled and disordered the mood really is in Israel, which describes itself as a civil society.

The expectation that a group of young people who came together to celebrate a birthday one wintery Friday afternoon in a relaxed atmosphere over beer should have been ready to engage in armed pursuit is more than just unreasonable. It threatens the vital bastions of normalcy in a strong and healthy society.

Jerusalem is much more sensitive. It lies at the heart of the Palestinian-Israeli conflict, so life there follows different codes of behavior. Jerusalem is always on the ready. It is a prime example of a city that has largely given up on normalcy. The idea that Tel Aviv’s pubs should be packed with armed youngsters is not just ludicrous, it is downright dangerous. It would be a sign that the state has abandoned its role in ensuring the safety of its citizens.

The thing is that due to the general madness that has overwhelmed the system since the start of the latest unrest, now an intifada of individuals, Israel’s leadership has been relaying the message that citizens will be best off if they take security matters into their own hands. As strange as it sounds, Defense Minister Moshe Ya’alon himself recommended in a series of interviews that citizens take responsibility for their personal safety. In an interview with Channel 10, for example, the defense minister said that the public must be alert and prepared for a sudden attack.

“Anyone with a gun,” he added, ''should shoot to neutralize the terrorist.”

Ya’alon’s comments were received as a natural response, even if they were troubling. What the defense minister was actually doing was privatizing citizens’ personal safety and forcing people to take responsibility for themselves, as if there were no state in place, and as if there were no security apparatus that costs the state billions of shekels.

Calls by Minister of Internal Security Gilad Erdan and other Knesset members to ease the process of obtaining gun licenses also reflect that disconcerting trend of responsibility for personal safety being imposed on the citizens themselves.

Obviously, it is important that the public remain alert and act, if necessary, to defend itself from assailants and even to “neutralize” them. The problem arises when this course of action becomes a primary and systematic response. It is the obligation of every government to provide security to its citizens, but especially of a government headed by someone elected on the security ticket and especially if that someone brags incessantly that he is the only person who knows how to keep Israel safe.

What makes this process even worse is the sense that the public has come to terms with its fate and is accepting this new responsibility imposed on it by the country’s leaders. The result is a quietly increasing trend encouraging citizens to be armed. With sticks, knives or guns, everyone must be ready to defend themselves and their loved ones. Yet, this readiness is not part of the unwritten contract between Israelis and the country’s leadership.

That is why the people who went out to have a good time or just to take a stroll down bustling Dizengoff Street in Tel Aviv last Friday afternoon are the normal ones in this story, as they weren’t armed and ready to engage an attacker in battle.

The city and people of Tel Aviv may have the reputation for living in a bubble, but Tel Aviv has seen other horrific attacks. It has even come under rocket fire. Nevertheless, there is still something at the heart of the city that keeps it on the front lines of sanity in Israel, as The New York Times so rightly observed.