After liberation from IS, Iraqi cities await reconstruction

After the Islamic State was defeated in several areas in Iraq, it seems the reconstruction promises have yet to be fulfilled in the absence of funds. 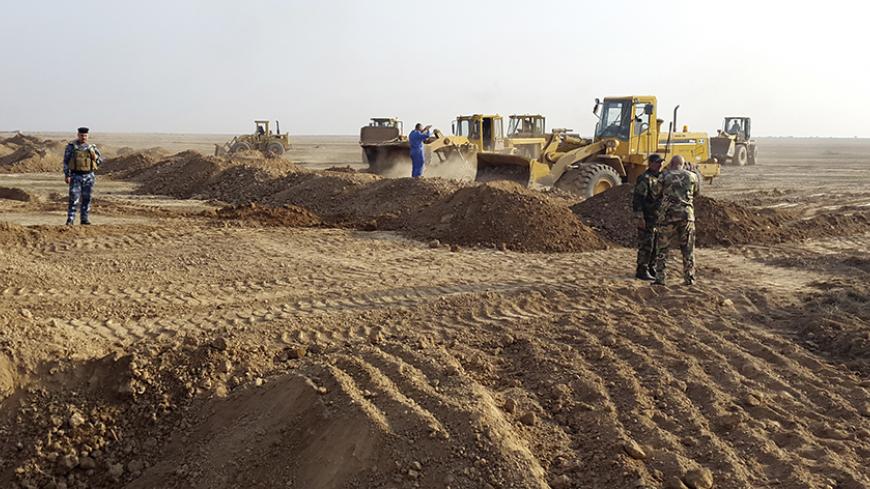 People operate heavy machinery during the building of a new road between Diyala province and Samarra, Dec. 21, 2014. A Shiite paramilitary organization is constructing the road to strengthen its positions across the mixed areas of Diyala and neighboring Salahuddin province.

The year 2015 saw the liberation of several areas of Salahuddin (Tikrit) and Anbar (Ramadi) provinces from the grasp of the Islamic State with operations toward that end ongoing. Yet, to date no serious reconstruction projects have been undertaken in those liberated areas, as the Iraqi government is faced with a difficult challenge — eradicating terrorism not only requires military effort, but also mobilization aimed at rehabilitating the residents before the area's infrastructure can be rebuilt.

Mosul fell on June 10, 2014, after a surprise attack by IS and the withdrawal of the Iraqi army and other security forces from the city. IS subsequently continued to rapidly advance toward Baghdad, and in a matter of days gained control of areas adjoining the capital, approximately 40-60 kilometers (25-37 miles) away, in Salahuddin province in the north and Anbar province in the west.

IS’ thrust came to a halt only after large numbers of volunteers, such as the Popular Mobilization Units, joined the ranks of the security forces to combat IS, following a fatwa issued by Grand Ayatollah Ali al-Sistani on June 13, 2014. In September 2014, IS began a gradual retreat from occupied areas as a result of the aerial campaign that was initiated the month before by the US-led military coalition.

In 2015, IS experienced a major setback in Iraq, where it lost control of key cities and large swaths of land, among them Tikrit, liberated in March, Sinjar, freed in November, and Ramadi, where Iraqi forces are currently routing IS out of its last strongholds, on Dec. 28.

Areas in Iraq occupied by IS suffered extensive damage to infrastructure, the local economy and private property, with the Parliamentary Services Committee estimating a total of $25 billion in damages up to April 2015.

Since then, this amount has significantly increased, and local authorities in Anbar and Diyala estimated that 80% of essential services were damaged and destroyed in their provinces, including bridges, as well as the electricity, health, water and education sectors. In addition, there has been a loss of state financial resources such as those associated with the agricultural sector in areas with abundant arable land.

As areas started to be liberated, the Iraqi government announced reconstruction plans, with a fund set up on March 11 for construction projects and the return of the displaced. The government allocated, within the 2015 budget, 500 billion dinars ($451 million) to the fund.

In addition, on March 17, immediately after the liberation of Tikrit, the General Secretariat of the Council of Ministers announced the adoption of two separate tracks for the reconstruction of liberated areas: a short-term track focused on providing security, water, electricity, food, shelter, medical care and education, and a long-term track for rebuilding infrastructure.

In that regard, the secretary-general of the Council of Ministers, Hamid Khalaf Ahmad, said March 24 that rebuilding liberated areas would require cooperation between international organizations and donor countries. He stressed “the need to quickly coordinate and establish ministerial crisis cells tasked with expediting the implementation of the reconstruction plan,” as part of the long-term track.

Diyala's governor said Nov. 21, “Reconstruction plans for the liberated areas of the [Diyala] province have been ready for implementation for months now and include all sectors. The governorate awaits the disbursement of funds allocated by the government to the reconstruction fund, to initiate construction operations.”

However, as of now, no reconstruction projects have been launched in Diyala or elsewhere, with promises postponed as usual, at a time when the administration of the Diyala province announced Dec. 21 that “the reconstruction plan for liberated areas will be launched in 2016,” without specifying a date.

Iraq is gripped by extremely difficult economic conditions, due to its budget deficit over the past two years and this fiscal year, resulting from low oil prices, the exorbitant cost of defeating IS, management of the tragic conditions suffered by millions of refugees, as well as the ordinary task of providing services to its citizens. In that regard, several countries, including the United States, have promised to back Iraq financially in order to ease its humanitarian crisis. Iraq has yet to receive this support.

Furthermore, international financial institutions have allocated funds to be invested in Iraq once warfare ends there; for instance, on June 26, Asia Frontier Capital established a development fund to support the Iraqi economy in the postwar period.