Iraqi Minister of Planning Salman al-Jumaili spoke with Al-Monitor about rebuilding the liberated areas and the economic and social challenges the country faces. 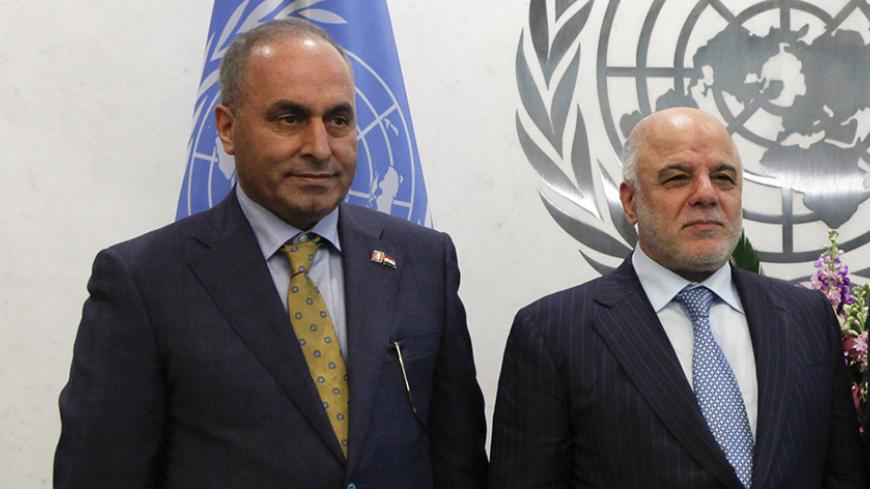 Iraqi Minister of Planning Salman al-Jumaili, in an interview with Al-Monitor from his office in Baghdad, said that his country will require a massive amount of funds to rebuild the areas liberated from Islamic State (IS) control. While he noted that it was too early to arrive at a precise estimate, he estimated the amount would be around $100 billion, adding that this figure “includes all the areas that were damaged during the presence of [IS], either by direct occupation or due to terrorist acts.”

Jumaili also addressed poverty in the country and methods by which the government is tackling it. While the minister said poverty rates had been on the decline leading into 2014, the rise of IS shifted this and poverty increased, particularly in Ninevah, Salahuddin and Anbar provinces. The minister also commented on the current financial crisis, saying that while the fact that the country will recover “is a given. … The question is how long it will take to get over such a tough, deep and complicated crisis.”

A transcript of the interview follows.

Al-Monitor:  What is the level of damage left by the fighting with IS? And how much money will Iraq need to rebuild the areas affected?

Jumaili:  It is too soon to talk accurately about the level of damage at this point, but the damage to the infrastructure and state institutions alone between 2004 and 2016 has been set at 42 trillion Iraqi dinars [$36 billion], 60% of it between 2014 and 2016. Regarding the scale of the damage to private property, it is very large, and there are committees charged with estimating it and working out its actual scale.

Different areas are damaged to different degrees depending on how much fighting took place there and because the military operations to liberate territories are ongoing. Some areas have still not been liberated, so figures on the scale of destruction will be lacking until those operations are finished.

Iraq needs $100 billion to rebuild the liberated areas, a figure that includes all areas that were damaged during the presence of Daesh [IS], either by direct occupation or due to terrorist acts, so the funds will be allocated according to the scale of the damage in each province.

Al-Monitor:  Have you put in place a plan and timeline for repairing the liberated areas? How much participation do you expect from the international community?

Jumaili:  I have prepared a paper on the general framework of the national plan for reconstruction and development for the areas affected by terrorist operations. It covers 10 years [2018-2027], and the funds needed were estimated at $100 billion over a decade. This plan will be carried out on three simultaneous tracks: the human development and social track, the basic infrastructure track, and the economic development track.

Al-Monitor:  There were reports that the poverty level has risen in Iraq. What official statistics do you have? And when was the ministry’s last survey? What are the reasons for the rise in poverty?

Jumaili:  The rate of poverty had fallen to 15% by the start of 2014, but because of the twin shock of IS and the fall in the oil price, poverty began rising again to reach 22.5% by the end of the year. It rose to 41% in the Ninevah, Salahuddin and Anbar provinces.

The last survey in Iraq was in early 2015, and the level of poverty was 31% in the southern provinces, 17% in the center, 12% in Baghdad, 17% in Diyala and Kirkuk, and 13% in the Kurdish regions. Hopefully a new survey can be done to work out the levels of poverty in Iraq this year or early next year, as the issue is linked to stability in the liberated areas.

Al-Monitor:  At what income level does Iraq set the poverty line? Does it follow international standards? Or does it set its criteria according to domestic social and economic conditions?

Jumaili:  An income of 105,000 dinars [around $90] per person per month was set as the poverty line, meaning that an individual whose income averaged more than that figure is not considered in poverty. But if the person’s income is under that, he is considered impoverished. And that figure takes into account the need for calories and the basics needed for subsistence.

Defining the poverty line and basic human needs is done with international experts from the World Bank and the World Food Program. It should be mentioned that most of the poor are close to the poverty line. The 2016 survey on food security in Iraq found that 2.5% of the country’s residents are not food-secure, most of them living in the countryside.

Al-Monitor:  What is Iraq’s population density today? And why has there not been a census in Iraq for almost 20 years? When will there be one?

Jumaili:  Iraq’s population was estimated at 37,883,543 in 2017. A census was planned in 2009 after a count and inventory of the country’s buildings and installations, but because of political interference in the census and a dispute over the naming of certain national groups, as well as a fear that the results of the census would be used for political purposes, the project was dropped in the second stage — the counting of Iraqis at home and abroad — and the numbers from the count and inventory were used to give us a good idea of the population in 2009 and estimates for the following years.

Al-Monitor:  Does the standardization and quality control agency play its basic role in the life of the Iraqi consumer? Or has it rolled back its work and become prey to political quota-setting?

Jumaili:  In order to control the quality of goods imported into Iraq, the agency made a deal with several international testing agencies to start implementing a program for pre-emptive testing of goods in their home countries, which has been running for four years. The four companies test goods for export to Iraq before their export and they issue certificates of conformity to Iraqi standards. Using dedicated laboratories, they have issued more than 130,000 certificates for half a million trucks for delivery to Iraq. Under a deal signed with these companies, the agency is monitoring their performance through random testing of goods coming through the borders to check up on their performance.

Al-Monitor:  There are many informal housing areas, or slums, in Iraq. What numbers does your ministry have on these areas? And what is your plan for tackling them without making their residents homeless?

Jumaili:  According to statistics gathered by the central statistics authority in 2013, informal housing accounts for 7% of total housing in Iraq and their residents make up 8% of the population.

Given that these areas are wells of poverty, the high steering committee that was set up to tackle this problem launched a national project to renovate these areas. A roadmap was put forward by the Cabinet under decision 279 in 2015, which adopted solutions and sustainable ways of tackling the phenomenon from four main angles: technical and administrative, legal and legislative, financial, and institutional.

Al-Monitor:  What is the level of trade between Iraq and the rest of the world? And what are Iraq’s main trading partners? Has Iraq’s high level of imports affected the country’s economy?

Jumaili:  The Iraqi market is flooded with imported goods, which has lowered local production of goods due to the inability of local producers to compete. Furthermore, the wheels of production for most local manufactured goods, factories and workshops, especially in the private sector, have stopped. That has been reflected in growing levels of unemployment due to workers being laid off.

Iraq’s top trading partners for goods other than oil in 2015 were China with $8.5 billion and the United Arab Emirates with $6.5 billion.

Al-Monitor:  Do you think Iraq can recover from its financial crisis? And can the conditions set by the World Bank for the coming years be a basis for a strong economic plan for the future?

Jumaili:  That Iraq can recover from its financial crisis is a given, but the question is how long it will take to get over such a tough, deep and complicated crisis. The collapse in the oil price meant the state’s income fell by 70%, while terrorist threats required massive defense spending as well as the burden of displaced people and immigrants.

The Iraqi government has taken several measures in the last two years, including a review of investment spending and the canceling of many investment projects and finding new sources of finance thanks to the help of the international community and the provision of several low-interest loans. All these steps have helped tackle and shorten the crisis.

Al-Monitor:  How would you describe the investment situation in Iraq? Do you think it has an attractive or hostile climate for foreign investment? Why have investment opportunities reportedly fallen?

Jumaili:  Iraq is an attractive destination for investment for several reasons due to its natural conditions. Furthermore, its investment climate is able to absorb investment projects, both local and overseas, because of the vast damage that has hit the country’s infrastructure as well as the shutdown of many productive activities.

Despite these advantages and the opportunities Iraq offers, there are some barriers, most importantly the security situation in all its complexity and the legislation and laws that are needed to provide a legal environment suitable for investors.