The wars that befell Iraq have negatively impacted the country’s economy, spiking its poverty rates and driving some to distrust what seems to be a temporary solution to the crisis the government seems inclined to adopt. 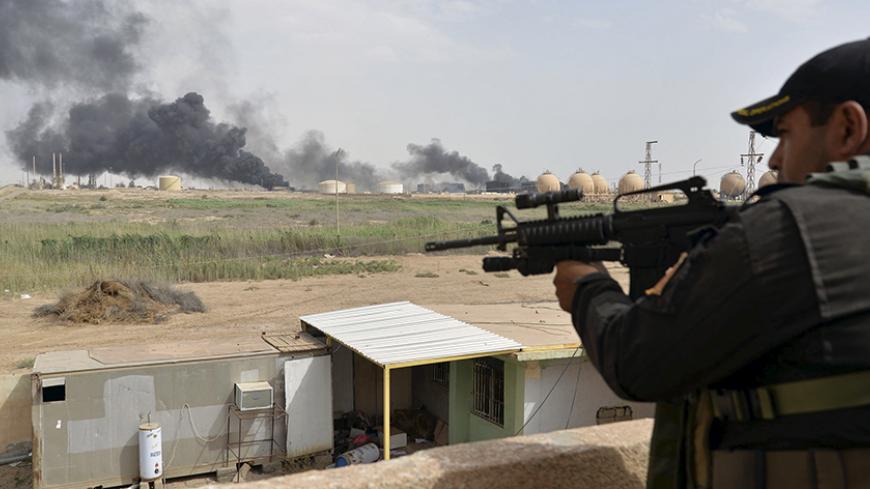 A member of the Iraqi security forces watches as smoke rises from the Beiji oil refinery, north of Baghdad, May 26, 2015. - REUTERS

BAGHDAD — The Iraqi army, backed by the Popular Mobilization Units, has been engaged in war for more than a year now against the Islamic State (IS). There do not seem to be any prospects that the war, which has affected the livelihoods and social realities of Iraqis, will end anytime soon. The heavy costs incurred by Iraq to acquire weapons and pay fighters led to the declaration of the 2015 austerity budget, which subsequently raised poverty rates in the country.

The economic crisis is not new to Iraq. It started with Iraq’s eight-year war with Iran, which began in 1980, and then escalated with Saddam Hussein's occupation of Kuwait, the economic siege on Iraq and the Gulf War. War in Iraq was renewed for the third time and ended with the US occupation of Iraq in 2003. Iraq is now waging a fourth war, this time against IS.

Indeed, the latest war is complex and draining a lot of Iraq’s resources because it is being waged amid a political divide, with administrative corruption hindering the country's development.

The Iraqi Ministry of Planning estimated that nearly 30% of Iraq’s population of more than 33 million lives below the poverty line because of Iraq’s conditions following IS taking control of more than a third of ​​the country’s area in June 2014.

Nevertheless, the war alone, in the sense of military operations, was not a key reason behind the rise in poverty rates. Rather, it was coupled with other reasons — most notably the mass displacement of Iraqis from IS-controlled areas, unemployment and the decline in crude oil global prices to less than $60 per barrel, particularly since 90% of Iraq's federal budget relies on oil revenues.

Despite this complex situation, Deputy Prime Minister for Economic Affairs Rose Nuri Shawis seems optimistic. He said, “There is [a] great possibility that Iraqi individuals will have positive living conditions, if Iraq overcomes its challenges.”

Shawis summarized these challenges to Al-Monitor, saying they consist of “the security situation, which is a major obstacle to Iraqis in all fields.”

Abdul-Zahra al-Hindawi, spokesman for the Iraqi Ministry of Planning, told Al-Monitor, “The displacement from Anbar, Ninevah, Salahuddin and Diyala provinces has heavily increased poverty rates in the country.” He added, “The economic situation in those provinces has caused half a million people to lose their jobs.”

Hindawi said that while the poverty rate was 23% in 2013, it has now increased to 30%. “The security situation has hampered the ministry's plan to reduce poverty,” said Hindawi.

Najla Ali, head of the ministry’s initiative to alleviate poverty, did not seem convinced by these statistics. She told Al-Monitor, “In collaboration with the World Bank, the ministry’s action plan will be implemented soon to determine poverty rates following the great displacement in Iraq.”

Ali said, “The plan to determine poverty rates will be conducted based on specific standards [that point to ways the ministry] can reduce this scourge, which has worsened this year because of the security situation.”

Hindawi said that the ministry “already has a plan to eradicate poverty through some projects [in cooperation] with other ministries. Yet there are reasons impeding [the plan’s] implementation, most notably the current economic situation in Iraq and some of [the] budget cuts for some projects.”

Emad Abdullatif, an independent economic and academic researcher, said, “All proposed solutions to reduce poverty in Iraq are temporary and are based on the distribution of oil rents. With the collapse of oil prices, they will subsequently collapse, and the poverty and deprivation circle in Iraq will widen.”

Abdullatif told Al-Monitor, “Any arrangements based on the government’s temporary material support make no sense, even if the necessary allocations are available in the general budget, because they consist of channels to legitimize corruption and waste public money.”

Skyrocketing poverty rates add to the calamities befalling Iraqi society. The Iraqi government’s neglect of the spreading of poverty, especially amid the rise in the number of orphans and widows, may lead to new challenges, such as the disintegration of society, which will naturally spike illiteracy, unemployment and crime levels.