How leaked documents find their way to Iraqi media

Politicians and government staff are discretely leaking official documents in the name of exposing corruption. 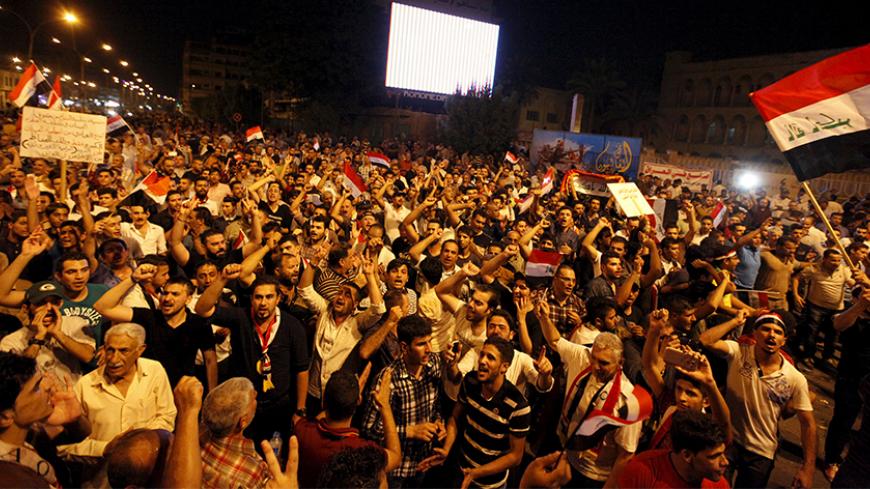 Protesters shout slogans during a demonstration calling for the trial of corrupt politicians in Baghdad, Oct. 2, 2015. - REUTERS/Ahmed Saad

BAGHDAD — Every now and then, Iraqi political and media figures leak official documents from various government departments to satellite channels such as Al-Baghdadia TV and Al-Sharqiya TV, social networking sites and digital newspapers such as Al-Masalah and Al-Ghad.

Some of these documents are authentic, as employees succeed in taking pictures of them while working in government institutions. They are then sold to be published in the media. On Nov. 1, documents were leaked about officials and the governor of Dhi Qar province squandering money. According to the Dhi Qarna website, the leak was the result of a political conflict between the legislative and executive authorities in the province about government positions.

However, there are also fabricated documents, forged for the purpose of defaming an individual, government department or political party. According to a news report published by the Iraqi Media House on July 21, the WikiLeaks documents concerning the relationship between Iraqi politicians and the Saudi government were falsified.

On Oct. 13, another document was leaked from the Iraqi Health Ministry about the involvement of former Health Minister Saleh al-Hasnawi in corruption cases.

Airing the dirty laundry of political opponents has kept online activists quite busy on social networking sites. A Facebook page called Top Secret Documents publishes dozens of leaked government documents. This page's administrator is unnamed and it does not specify how the documents were obtained.

Hisham al-Suhail, a parliament member for the National Iraqi Alliance, attributes the practice to a “lack of transparency … regarding the work of government institutions and the spread of financial and administrative corruption, which pushes citizens to try and expose such documents.”

Speaking to Al-Monitor, Suhail called on the government to “facilitate access to information and to hold accountable those responsible for corruption in order for citizens to realize that the judiciary is effective and does not overlook corruption issues. This would lead to decreased interest in leaking documents.”

The high rate of leaks reflects a tense Iraqi political environment, said Qasim Mozan, a journalist for the Iraqi newspaper Al-Sabah. He explained to Al-Monitor, “The majority of the leaked documents are a natural outcome of the differences between political parties and the officials that represent them. Each resorts to leaking documents that condemn the other to expose and undermine it.”

However, Mozan refused to name any party and figure, saying only that documents are often shared via media figures and staff working secretly with the support of political parties, to avoid any party being accused of leaking documents.

According to Mozan, “It is easy to take pictures with small cameras or mobile phone cameras. In addition, being able to immediately post these pictures on social networking sites has further encouraged this phenomenon.”

In an interview with Al-Monitor, parliament member for the Civil Democratic Alliance Mithal al-Alusi said of the reason behind the leaks, “Some people are eager to prosecute corrupt figures, so they leak such documents to expose them.” Asked about fabricated documents, Alusi said, “These are part of the corruption that is rampant in Iraqi institutions.” Alusi also noted reasons related to “the political conflict between figures and parties.”

Although the Iraqi Cabinet issued a decision criminalizing the leaking of documents or the publishing of a leaked document in the media on Aug. 1, 2013, Al-Baghdadia satellite channel published on its show "Studio 9" on Feb. 26, 2014, official documentation of the minutes of the Cabinet meetings, information that is highly confidential. According to these documents, Iraqi ministers were busy securing their own financial privileges instead of discussing the concerns of the Iraqi people.

Al-Monitor asked journalist Nassar Alkurity of the Iraqi Media Network whether publishing official documents is legal. He answered, “Publishing [such documents] is a positive thing in terms of exposing corruption.” However, he said it is indeed illegal “since the documents are being stolen from government institutions, which results in the loss of confidence in government employees and subjects them to legal accountability.”

Al-Monitor spoke with attorney Ismail Ahmed, the director of a law firm in Babil, south of Baghdad. Ahmed said, “Publishing official documents in the media without official approval is a type of cybercrime. It also points to the government staff's negligence, which is illegal, as Paragraph 438 of Section Four of the 1969 Iraqi Penal Code stipulates that the disclosure of confidential information is punishable by a period of detention that does not exceed one year based on the seriousness of the crime, which would be decided by the judiciary.”

Meanwhile, Paragraph 164 of the 10th Amendment Act 77 of the Penal Code of 1984 states, “The death sentence is given to any person who wilfully destroys, conceals, steals or forges banknotes or documents knowing them to be instrumental in upholding the rights of Iraq.”

Whatever the justification given for leaking documents — such as exposing corruption and theft and unveiling corrupt officials — such acts constitute an encroachment on the law and a breach of government workers' responsibility to preserve the confidentiality of the department or institution in which they operate.