Despite the exposure and imprisonment of British businessman James McCormick for selling fake bomb detectors to several countries, Iraqi security officials continue to justify the use of these devices. 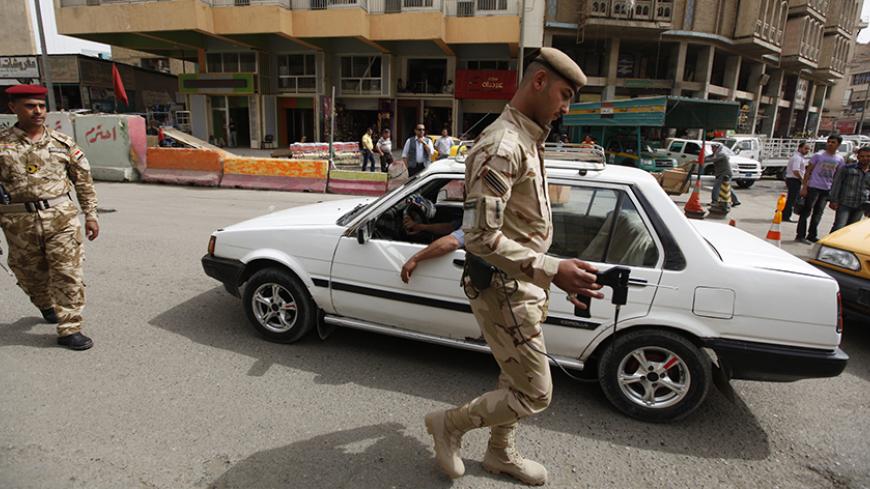 An Iraqi soldier scans a car with a bomb detector at a checkpoint at Shurja market in central Baghdad, April 28, 2012. - REUTERS/Thaier al-Sudani

Though widely used at Iraqi checkpoints, these devices have not helped stop the bombings in Baghdad and many Iraqi provinces that have caused massive destruction and casualties. According to a report published by Alsumaria TV Dec. 31, 2014 saw a high level of bloodshed, with most casualties in Iraq being caused by car bombs.

The devices have a movable antenna installed on the plastic handle. The antenna is supposed to point in the direction of items containing explosives. However, seven years of use have shown that it does not. The antenna actually points out other unexpected items, such as perfumes, dental fillings and household detergents.

In a Jan. 23 telephone interview with Al-Monitor, Radio Demozy's director Ibrahim al-Saadi said that many baffling issues have been noted in the device. Whenever the antenna points at people, the security officers at checkpoints ask them weird questions such as whether they are carrying perfumes, or whether they were visiting a dentist. The device seems to randomly point to anything, leading some Iraqis to rename it the “detector of dental fillings,” Saadi said.

In its program “Talk of the Town,” Radio Demozy has dedicated episodes to discussing the bomb detectors, airing statements from officials on the matter.

In 2013, McCormick was sentenced in Britain to 10 years in prison for exporting these devices to several countries — including Iraq, the largest importer. The court found that the devices gave these countries a false sense of security and caused the deaths of large numbers of people.

The BBC published a report on Dec. 22, 2010, documenting the ineffectiveness of these devices, based on an experiment conducted by a British laboratory. The report revealed that the device had also been examined in the United States and was shown to malfunction. In 2013, another television show, Al-Baghdadia's "Studio at 9," also addressed the bomb detectors.

Despite all the rumors that have circulated for years, the Iraqi Interior Ministry, which imported the devices, does not seem interested in the evidence, nor the opinions of Iraqis. Ministry officials continue to insist that the device was effective, including former Iraqi Interior Minister Jawad Bolani in January 2010.

Radio Demozy is located in the eastern Karrada district, one of the areas most vulnerable to bombings in Baghdad. Saadi expressed his displeasure with seeing Iraqi security officers insist on using these devices, and said that the practice is an insult to Iraqis and their lives, adding, “Many Iraqis died because of these devices.”

Saadi said that continuing to use these devices is an attempt to cover up the corruption suspected in their importation. The former officials who imported them insist that they are effective because acknowledging their ineffectiveness would open them up to liability.

Due to the uproar over the continued use of these devices and the absence of any serious investigation to hold those responsible accountable, a number of Iraqi activists have created the "National Campaign for the purchase of real bomb detectors.” The campaign has a Facebook page to gather the latest developments about the detectors.

These activists say the goal of the campaign is to force the government to replace the ADE651 devices with real detectors and prosecute those involved in their sale to Iraq.

The new Iraqi government is seeking a solution to this problem. For the first time, in October 2014, Prime Minister Haider al-Abadi admitted that these devices are useless and promised to replace them.

However, this does not seem to be enough for Iraqis, Saadi told Al-Monitor. Replacing these devices with effective ones is an important step, but it should be accompanied by an expanded and serious investigation to hold accountable those responsible for this deadly and corrupt deal.

by Murielle KASPRZAK and Joseph SCHMID | AFP | May 26, 2022
END_OF_DOCUMENT_TOKEN_TO_BE_REPLACED