The leader of Hezbollah in Iraq, Wathiq al-Battat, continues to amp up talk of Shiites exacting revenge against al-Qaeda and Baathists. 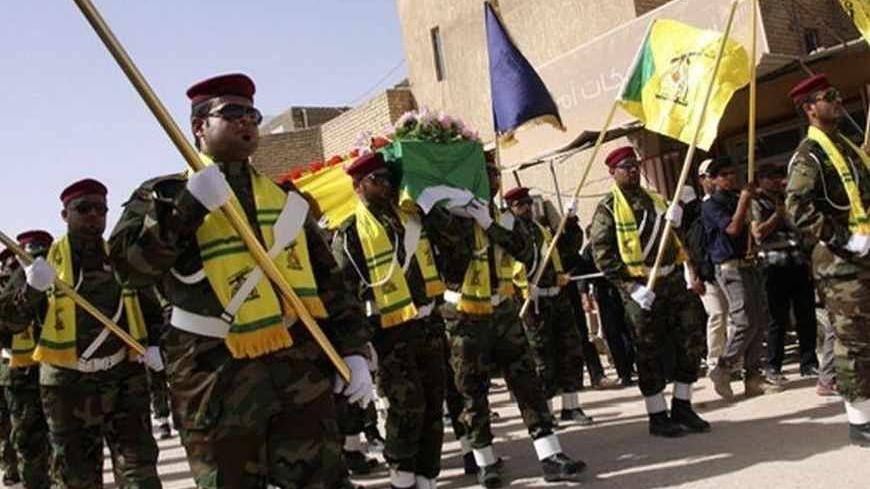 Members of Hezbollah Iraq carry the coffin of their comrade Reza Khudair al-Khalidi, who was also a Shiite fighter and killed in clashes with the Free Syrian Army, during his funeral in Karbala, 110 km (70 miles) south of Baghdad, June 5, 2013. - REUTERS/Mushtaq Muhammed

Wathiq al-Battat, the turbaned controversial figure who has been wanted by the judiciary for five months, admitted in a TV appearance on July 11 to carrying out killings and bombings in Baghdad, through a militia called the Mukhtar Army. Iraqi forces then decided to arrest the program’s staff who had conducted the interview, without arresting Battat himself.

This perplexing picture has sparked confusion in Iraq. Battat, who introduced himself to the media as secretary-general of Hezbollah in Iraq, announced in February the formation of a militia designed to kill al-Qaeda members and Baathists, in retaliation for the bombings against Iraq’s Shiite cities.

This announcement served to engender panic among citizens, particularly since it indicated that the 2006–2008 civil war scenario could be reproduced. Yet, it mostly represented a serious and blatant defiance of Iraqi authorities, judiciary and laws. This has required the issuance of an arrest warrant against Battat, which has yet to be implemented.

The fact that Iraqi security services have failed to find a person whose appearance and place of residence are known, who was approached by the media for dialogues and interviews and who made internal contacts in Iraq raises many questions.

These questions increased on July 11, as Al-Baghdadia TV broadcasted a two-hour live interview with Battat on the Sahour Siyasi program. During this interview, he said, “I announce the formation of the Mukhtar Army, so that Shiites can avenge [attacks carried out by] al-Qaeda, takfiri groups, Baathists, those who are linked to the United States and the Zionists and whoever sheds Shiite blood.”

He also claimed responsibility for the bombing of Camp Liberty — which is inhabited by Iranian refugees from the Iranian opposition group Mojahedin-e-Khalq — and the bombing of the Mubarak Al-Kabeer Port in Kuwait, saying that there are a million fighters within his militias.

Two hours after the program ended — at about 3 a.m. — security forces stormed Al-Baghdadia’s headquarters and arrested the staff of the Sahour Siyasi program for a few hours, before releasing them. This caused a series of condemnations by media organizations that defend the freedom of the press in Iraq.

The problem is not just that the authorities have miscalculated the role of the media and press freedom, but they have continuously allowed figures who openly threaten social peace to turn the media into a tool to intimidate the Iraqi public.

On Feb. 8, Ali al-Moussawi, a spokesman for the government, accused the judiciary of delaying the issuance of an arrest warrant against Battat, while TV channels showed pictures of youth announcing their enlistment in the Mukhtar Army, which he established.

Yet, the situation remained unchanged after the arrest warrant was issued and it was confirmed that Battat was in Iraq. His presence in the country was confirmed through a series of interviews and statements that he has made since then. He has reaffirmed his commitment “to exterminating Baathists and terrorists,” and warned the government that he will launch an armed conflict if new laws allowing Baathists to return to their jobs are approved.

There have been many questions about Battat’s mysterious character. While he was on the program, he said he had been arrested twice under the former regime. He then enlisted in various armed groups until joining Hezbollah in Iraq and established the Mukhtar Army a few months ago.

Is Battat being protected by foreign countries? Do Iraqi forces, parties, tribes and religious or governmental figures cover up for him? Does he have capacities and potentials that help him evade security surveillance? All these questions remain unanswered in Iraq and require an answer from the Iraqi government.

There have been increasing doubts regarding the credibility of this figure. At times, he talks about forming a branch of his militia in Egypt, and then he talks about threatening Saudi Arabia and the Kurds — and [the possibility that] his army could grow to one million fighters.

Yet, Battat’s issue is not about how credible he is. Rather, it is about the Iraqi environment, which has proved favorable for the emergence and growth of militias, and for the use of sectarianism to gain the people’s sympathy.

It appears that the government is not capable of confronting and addressing the growth of militias in Iraq by itself. Iraq is in need of a public culture that renounces militias and opposes supporting and defending them. Such a culture is not clearly and completely present in Iraq. This country has witnessed years of sectarianism, and the threats of civil war are still haunting it to this day.