Militias have been a feature of Iraqi politics and society since the founding of the modern state, writes Mushreq Abbas. 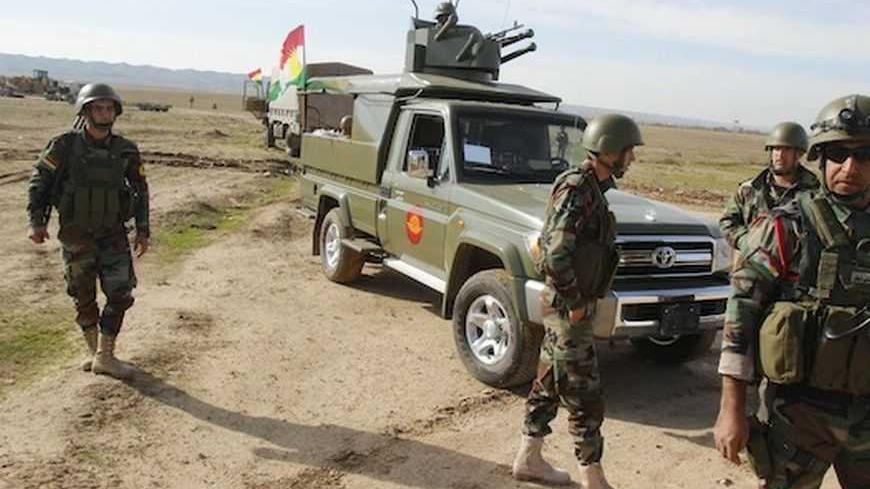 Troops from the Kurdish Peshmerga — the armed forces of the Iraqi Kurdistan Region — are deployed on the outskirts of Kirkuk, 155 miles north of Baghdad, Dec. 3, 2012 - REUTERS/Ako Rasheed

Militias have always been in Iraq, and they comprise an integral part of modern Iraqi history. They have been prevalent among both state authorities and their opponents. The very definition of Iraqi political parties, particularly after the republic was founded in 1958, is tied to the idea of military wings, assassin groups, secret security attachés and their resistors.

In other words, 2003 wasn't the year militias were discovered in Iraq. Before April of that year, the most recent iterations of Iraqi militia were the foreign combatants employed by the authorities under the name “mujahideen” to fight American forces. Those were preceded by “Saddam’s Guerrillas” and ultimately split into new, ambiguous militias as a result of the American presence in Iraq.

The idea of “resistance against the occupation” was hard to object to, but in many cases, it was little more than an excuse for new militias. The collapse of the state, the dissolution of its institutions, Iraq's opening to foreign forces and suspicions among different sects all provided natural motives to form militias, even after the withdrawal of the American army. Social upheaval, cultural turbulence and individual, regional and sectarian fear following 2003 not only contributed to the emergence of new militias; these factors also fostered a social environment with people who were sympathetic to militias, who needed them for protection, or who feared the militias so much that they kept their silence.

The announcement the Shiite Mahdi Army's formation coincided with similar announcements by a number of armed Sunni groups, including the Islamic Army and the 20th Revolutionary Battalion. It also coincided with the emergence of al-Qaeda in Iraq. These armed groups quickly reproduced and became more numerous, with their map growing increasingly complex. Until 2005, their slogan was “resisting the occupation” and “fighting its collaborators.” Most of them changed face between 2006 and 2007, and formed opposing sides in the civil war that has claimed the lives of thousands of Iraqis. Now the slogan has changed to “in defense of the sect.”

This shift in tone of the militias was not absolute. The Iraqi offshoot of al-Qaeda announced early on that its goals had nothing to do with the American military presence and that the extremist organization’s war would not stop after the occupation ended. The Sufi Tariqa Naqshbandiyya, led by Baath Party head Izzat ad-Douri, echoed al-Qaeda’s stance.

It was not clear whether Shiite groups like Hezbollah in Iraq and Asaib Ahl al-Haq would take up arms. The groups that split lost their street clout, and as the Mahdi Army solidified, they waited for an opportunity to make a comeback. Wathiq al-Batat, a Shiite cleric, popularized discussion of a militia called “Al-Mukhtar army,” which had declared several weeks earlier that its goal is to defend the Shiite sect. It was unsurprising that the Sahwa organization in Anbar province, led by Sheikh Ahmad Abou Risha, began to oppose the government in defense of Sunnis. A climate that is conducive to militia activities remains prevalent and is capable of fusing together old and new militias for new, clearer purposes.

On separate occasions, the Turkmen in Kirkouk and Talafour demanded the formation of private militias under the patronage and protection of the state. The Shabak in Mosul, and some Christians throughout Iraq, made similar demands in the Nineveh plains. This ties back into the legacy of Paul Bremer, the American administrator in Iraq, who decided to merge the militias into the army and police force beginning in 2003.

Regarding today's distribution in the balance of official power, the Kurds in the Iraqi Kurdistan Region have their own armed forces known as the “Peshmerga,” comprised of 200,000 combatants. The Shiites in the south have practical control over the largest proportion of the army and police, with 600,000 fighters. The Kurdish Peshmerga asserts that it is a part of the Iraqi defense body, the Shiites say that conditions necessitated a Shiite element in the Iraqi army and security forces, and the Sunnis say that they have been persecuted as a result. The Sunnis continue to complain about the absence of a balanced distribution of armed forces.

All indications point to the tendency of Iraqi’s three constituents — Sunnis, Shiites and Kurds — to protect themselves through their own armed forces, rather than relying on others.

This hypersensitive point is the focus of many of Iraq’s problems today. The equation seems paradoxical. On the one hand, allocating members of the Iraqi army and security forces based on sect, and incorporating more militias and militant groups into the army, will quickly lead to armed threats emerging outside of Iraq to defend the sects. On the other, carelessness regarding the balance of sectarian representation in the security forces and the army will leave political parties operating in an environment filled with corruption, suspicion and lack of consensus. This would inevitably produce a preoccupation with military and security capabilities for the sect’s own sake. This catastrophe involves the structural foundations of the Iraqi state, since at core it is about Iraqi national identity.

Will the situation shift toward a “state of different components” and concordances? Or will Iraq be a strict, centralized state? Will people recognize that coexistence in Iraq relies on the idea of “citizenship,” and requires eliminating individual armies to defend sects? Or will people recognize that suspicions between sects are complicated, and it's insufficient to coerce them into a superficial “citizenship” that would leave a tumultuous conceptual environment? The answer to these questions requires resolving the debate around militias, their different permutations and their implications.