Confusion over how Hassan Khomeini was informed about taking an exam may lead to his disqualification to run in the Assembly of Experts elections. 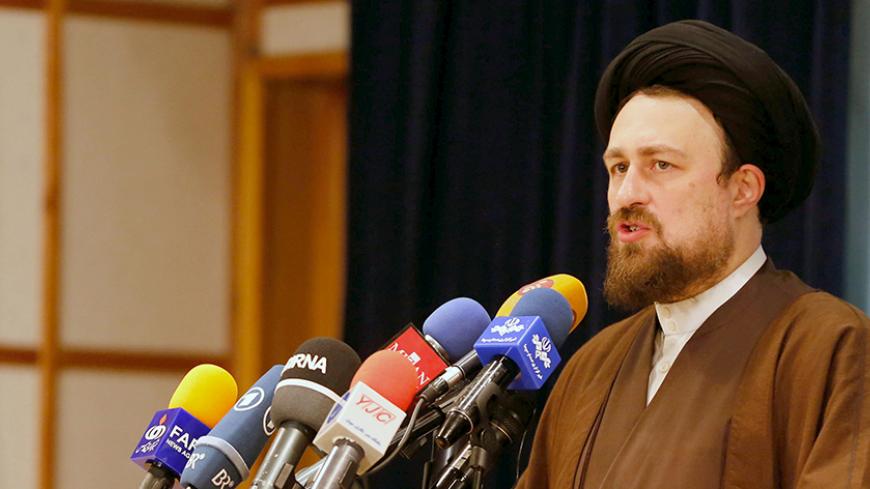 Hassan Khomeini, 43, a grandson of Iran's Ayatollah Ruhollah Khomeini, talks to journalists after he registered for February's election of the Assembly of Experts, the clerical body that chooses the supreme leader, in Tehran, Dec. 18, 2015. - REUTERS/TIMA

On Jan. 5, the Assembly of Experts, the body that elects the supreme leader of Iran, held examinations for the candidates who registered to run in the 2016 elections. Of the 531 candidates who registered for the assembly elections, 400 attended the exam. Of the 131 missing from the examination, the most notable was Hassan Khomeini, the most prominent grandson of Ayatollah Ruhollah Khomeini, the founder of the Islamic Republic of Iran.

Hassan Khomeini’s absence surprised many, including Reformist and moderate figures and media, who were hoping to use the Khomeini family name to increase their political clout both in the assembly and parliamentary elections. His absence was stranger still because the test was administered in Qom, Iran’s religious center 80 miles south of the capital, a city Khomeini often resides in.

According to his family members, Khomeini was never informed of the details regarding the test. Family members said that while the test was being administered, he was teaching a class. They even released a picture on social media showing the young cleric sitting at the center of what looks like a hosseinieh, or religious center, supposedly at the same time of the test.

Family members also denied reports that Khomeini’s absence suggests he is pulling out of the elections.

The Guardian Council responded to claims that Khomeini was not informed of the test by saying that all the candidates were sent a text message about the test. They reiterated that no candidates would receive special concessions regarding how they would be informed. Dana website claimed that the Guardian Council had even prepared a special room for Khomeini to take the test, though this was denied by sources close to Khomeini.

But there are doubts about the text message. Ebrahimian told Etemaad newspaper that the Guardian Council had put out a public statement regarding the test. He said there was no written or personal invitation to take the test. He added that only candidates who have not been approved previously to run in the elections are required to take the test.

Etemaad, a Reformist paper sympathetic toward Khomeini, quoted Dec. 15 comments by Ayatollah Mohammad Momen, a member of the Guardian Council, who said that if a cleric teaches classes and has made public political statements, a religious test is not necessary and there is enough information to judge his qualifications.

Conservative media, concerned about the popularity of Khomeini, were quick to exploit his absence from the examination. Even before this round of controversy, on Jan. 3, Mohammad-Ali Mohsen-Zadeh, Supreme Leader Ayatollah Ali Khamenei’s representative to the Islamic Revolutionary Guard Corps' 41st Sarallah Division, warned that a new sedition was being planned by the family of Ayatollah Khomeini.