Former Defense Secretary Chuck Hagel says President Barack Obama erred in calling for Syrian President Bashar al-Assad to go and declaring a red line over Syria’s use of chemical weapons, and also compared Republican presidential candidates to a "mass gong show" and urged them to be less divisive. 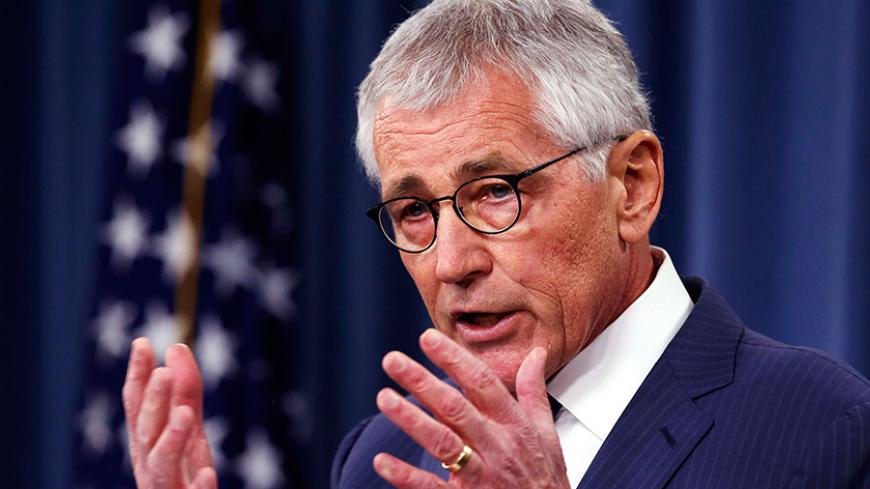 US Secretary of Defense Chuck Hagel talks during a news conference at the Pentagon in Washington, Jan. 22, 2015. - REUTERS/Larry Downing

Former Defense Secretary Chuck Hagel told a Washington audience Jan. 13 that President Barack Obama erred when he called for President Bashar al-Assad of Syria to step down early in the Syrian civil war.

While Assad is a “brutal dictator” who must eventually leave office, Hagel said, the United States should have learned from the chaos that followed the abrupt removal of Iraq’s Saddam Hussein and Libya’s Moammar Gadhafi that taking out authoritarian leaders without knowing who will take their place is not the best solution.

“We have allowed ourselves to get caught and paralyzed on our Syrian policy by the statement that 'Assad must go,'” Hagel said, adding, “Assad was never our enemy.”

Asked by Al-Monitor what it would take to bring stability to Syria after the deaths of 300,000 people — many at the hands of Assad’s forces — and the country’s fracturing into battered ethnic and sectarian enclaves, Hagel said it would require working with the Russians, Iranians and Saudis. “All have to come together with enough common interest to stabilize things,” he said.

Hagel, a decorated Vietnam veteran and the first non-commissioned officer to run the Pentagon, was pushed to leave the Obama administration after only two years on the job after a series of disagreements over policy and process. While gentler in his criticism of Obama the evening of Jan. 13 than he was in a recent interview, he also criticized the president for declaring a “red line” against Assad’s use of chemical weapons and then failing to carry out missile strikes in 2013 when Syria’s massive use of such arms was confirmed.

Hagel expressed support, however, for Obama’s emphasis on diplomacy, particularly with adversaries such as Iran. Asked by Atlantic Council President Fred Kempe for his views on the Iranian detention and quick release of 10 US sailors following intense US-Iran contacts, Hagel said that while there will need to be “a full investigation” of the circumstances that led the Americans to stray into Iranian waters and their treatment by the Iranians, "It’s good news that our sailors are out of there."

He added, “I have supported strongly” the Iran nuclear deal and failure to free the sailors would have “very much put in jeopardy the future of that agreement.”

Hagel was admonished by the White House and ridiculed by many when he called the Islamic State a “threat beyond anything we’ve seen” in the summer of 2014, after IS had just taken Iraq’s second-largest city, Mosul.

On Jan. 13, he suggested that events had vindicated him. IS, he said, is the “most spectacular nonstate actor we’ve seen” due to its use of social media, ample finances and sophisticated military tactics. “It was a force we had never been up against and we didn’t know how to deal with it,” Hagel said. He offered no solutions, however, beyond working with regional and other powers to stabilize Syria and shoring up the Iraqi government.

He repeated criticisms of the White House for trying to dominate Cabinet departments and holding too many meetings.

“If you want to bring in the best people you are not going to get the best people if they think that they are going to be constantly second-guessed, overloaded with micromanagement … or their time wasted in endless meetings,” he said.

Hagel also had harsh words for the Republican-led Congress. Just three days after he took office in 2013, a series of draconian budget cuts known as sequestration went into effect. Those cuts, and a 16-day government shutdown that occurred when Congress refused to pass new spending measures, hurt US national security, Hagel said.

An old-school moderate Republican and former senator from Nebraska, Hagel complained bitterly about partisanship and about those who come to Washington seeking, he said, to tear the system down. He chided Republican presidential candidates in what he called this “goofy political season” and compared their antics to a “mass gong show,” a reference to a comic talent contest that ran on television in the 1970s and 1980s.

As he did in an interview with Al-Monitor in 2012, Hagel said that he was not sure what the Republican party stands for anymore. In his latest remarks, he added that the party reminded him of the Sioux nation “made up of many different tribes.” He said he doubted the party would sort itself out for another four years.

Asked what advice he would give to Donald Trump, the current front-runner in Republican polls, and other candidates, Hagel said, “Focus on uniting the country, not dividing it.”