The co-Chair of Obama's Intelligence Advisory Board and former Senator talks to Al Monitor Washington correspondent Barbara Slavin about scenarios that could prod Israel to act on Iran, the GOP candidates' obsession with threats to bomb Iran, Assad’s inevitable fall and Obama's plans on Mideast peace. 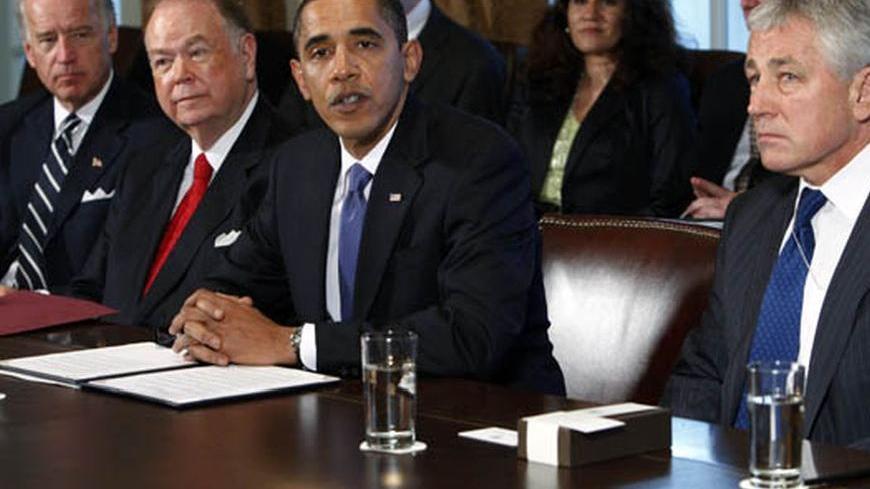 Chuck Hagel, who co-chairs the Obama administration’s Intelligence Advisory Board, says the United States should offer Iran “face-saving ways” out of the nuclear crisis and let Arab countries to take the lead in ousting Syrian president Bashar al-Assad.

In a wide-ranging interview March 9 with Al-Monitor Washington correspondent Barbara Slavin at Georgetown University, where Hagel teaches a weekly class, the former Republican senator from Nebraska hinted that private approaches to Iran were already occurring. He praised President Barack Obama’s handling of foreign policy and said Obama could do even better in the first two years of a second term.

Al-Monitor: Do you still consider yourself a Republican?

Hagel: I don’t know what the Republican Party is. I know why I registered a long time ago; my first vote was in the Mekong Delta absentee in 1968. But we’ll find a new center of gravity...  After the American people speak in November, that gives us some new possibilities. If the president is re-elected, like most two-term presidents, your fifth and sixth years can be your most productive.

Al-Monitor: Let’s turn to foreign policy and start with Syria. There was a hearing at which Defense Secretary Leon Panetta and Chairman of the Joint Chiefs Gen.  Martin Dempsey pushed back against calls by people like Sen. John McCain (R-Arizona) to start bombing but they also said we’re looking into contingency planning. Do you sense that things are beginning to shift toward some sort of intervention and if so, what kind of intervention should that be?

Hagel: We have to recognize the landscape in the region. What’s going on in that region is about as volatile as we’ve seen…since 1967. There is no country there that’s really, really stable. .. Israel has no secure borders now at all, other than the ocean.

[That said] I think the president is playing this exactly right. We cannot be the tip of the spear under any circumstances. This is not Libya and even Libya was a coalition…If there is some military intervention, it has to come from the region. The Arab League… I don’t think it can be a NATO-led element.

Al-Monitor:  Obama appears to have managed to tamp down calls for war with Iran at least for a while. Do you think Israeli Prime Minister Benjamin Netanyahu would attack Iran at this time given the clear opposition of the United States or is he just trying to make sure that Iran stays front and center?

Hagel: The Israeli people are divided. The number I saw in the Wall Street Journal, which is not exactly a timid liberal rag, 19 percent of the Israeli population would not support military intervention [without U.S. involvement]... The most recent three Israel heads of intelligence all of them have said … crazy, insane to do this. There’s a real open question whether Israel has the capacity militarily to even come close to accomplishing what its military objective is…

I have not read or heard or talked to anyone privately who knows something about this who does not believe that Iran would not respond in probably a rather significant way, the asymmetric capacity Iran has to hit our vulnerabilities, other vulnerabilities… There will be a lot of killing. These things start and you can’t control. They escalate. They always do and they always will.

… I don’t think that we are necessarily locked into one of two options. And that’s the way it’s presented. We are great in this country and in our politics of responding to false choices; we love false choices.

Al-Monitor: Bomb Iran or live with Iran with a bomb?

Hagel: Exactly. We may eventually wind up with those choices. But I don’t think we’re there now. We’ve got some time, keep ratcheting up the sanctions, keep the world community with you.

…You cannot push the Iranians into a corner where they can’t get out…You’ve got to find some quiet ways – and you don’t do this in the press or by giving speeches – to give them a couple of facing saving ways out of this thing so they get something out of this, too. And recognizing internally what’s going on in Iran; things are not going particularly well. Let that play out… So you work this thing on a number of parallel tracks.

Our friend Andrew Parasiliti [board member of Al-Monitor] had this in a piece he wrote recently. He talks about Ahmadinejad laying on the table [and offering to stop producing] 20 percent [enriched uranium]. We’ve got to test all that. There’s a great Arab proverb: Trust Allah, but tie up your camel.

…You’ve got to break into some creative thinking here…don’t get caught in these damn traps.    If you listen to the Republican presidential candidates, they can hardly race to say who would bomb Iran first; it’s just amazing.

Al-Monitor: Do you know if there any private approaches going on or is it all through the five permanent members of the U.N. Security Council plus Germany?

Hagel: I know more than I can tell you; there may be. I hope. I don’t see any other way around this. Because you can’t deal with something … as explosive as this is out in the public.

Hagel: It was clear to me early on that Iran was going to be a central factor in any outcome from the Middle East. .. [It’s a] state sponsor of terrorism, large country, educated country, sophisticated country, resources, where it was positioned, the entire east side of the Persian Gulf. It was never a question in my mind that the more I could know and learn and understand about Iran, the better positioned I would be hopefully to understand all the components and pieces of this…

The last three Iranian representatives to the U.N., I would meet them … to just listen…We Americans have this frame of reference … we see a problem, there has to be a solution... Well, the kind of complicated world we live in, I’m not sure there’s a solution to everything right now. What you have to do is manage it so it doesn’t get worse, manage it toward a higher ground of solution possibilities.

… You asked if I think it’s possible the Israelis will strike without U.S. authorization. Yes I do think it’s possible. I say possible, I didn’t say probable, I didn’t say likely…Let’s take a possible scenario… If an Israeli ambassador is assassinated, high profile somewhere, and there’s clear evidence that this was ordered by the Iranians … that’s just one scenario. What happens if an Israeli airliner is shot down? There are combustible dynamics in play that are totally out of anyone’s control right now.

I do think Obama’s done a good job overall. There are a lot of things I don’t agree with him on; he knows it. I have the honor and privilege of seeing those guys a lot. [Vice President] Joe [Biden] is a good friend. Obama and I got to know each other pretty well in the Senate even though he wasn’t there very long. As you know, he asked Jack Reed (D-Rhode Island) and me to go to the Middle East with him so we spent a lot time [together]… I have the highest regard for him in every way. I think he’s one of the finest, most decent individuals I’ve ever known and one of the smartest… I try to remind my Republican friends when they hammer him that this is a guy who inherited the biggest agenda of problems in this country ever inherited by a president since Franklin Roosevelt and maybe worse. Roosevelt didn’t inherit two wars that were messes with a global financial crisis.  Everywhere you look, this guy had problems to try to dig his way out of it. And I think he deserves some credit.

Maybe we aren’t as far down the road as we could be, but I don’t think we’ve gone backward. We’ve gone in the right direction. Any president … first two years of his administration he’s really dealing with the previous administration’s budgets… That’s why I said it’s the fifth and sixth years of a two-term president that give him the biggest window.

Hagel: I think he would put some real time into… a Middle East peace and I had a long talk with him and I know he wants to do that. . . He will try to put a lot of effort into that because he knows that that’s such a big part of everything.

Al-Monitor: There’s a big painting of former president Dwight Eisenhower in your office. Is he one of your heroes?

Hagel: Every year that goes by, I admire him more and more [for his] wise, steady leadership.

Hagel: I was fortunate to serve with some of those people of the World War II era, [former senators] John Chafee [R-Rhode Island], John Warner [R-Virginia]… I admired [the late Massachusetts Sen.] Ted Kennedy. Men and women who are focused on a purpose in their careers; it wasn’t just about let’s enhance our party or it’s all about the election.