Are this week's Geneva talks on Syria doomed to fail?

Geneva III negotiations are expected to start Jan. 25 to seek a long-awaited political solution to the lingering Syrian crisis, but the parties have set preconditions and can't even agree on who should participate. 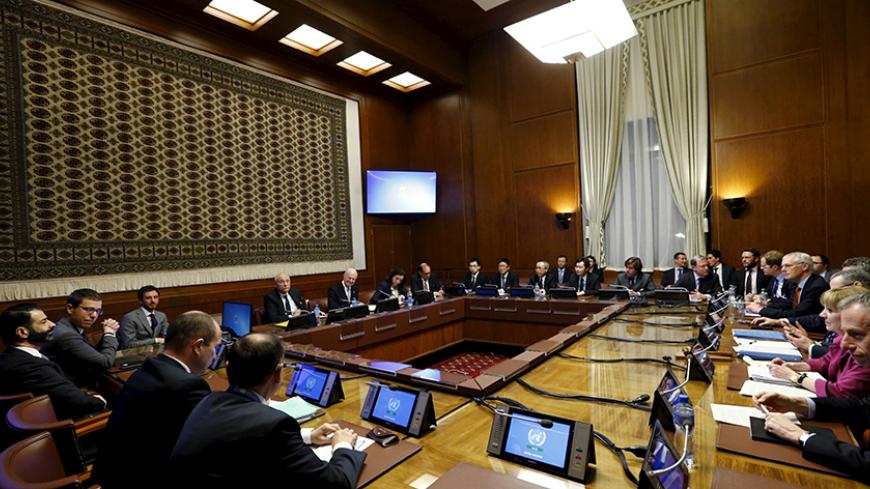 DAMASCUS, Syria — There is no glimmer of hope for a solution to the Syrian crisis, even with the Geneva III peace talks planned for Jan. 25 between delegations of the regime and the opposition. As if the process weren't fragile enough, Army of Islam (Jaish al-Islam) political leader Mohammed Alloush was named chief negotiator for the opposition. The Russian and the Syrian governments consider the Army of Islam a terrorist organization.

Two years ago, the Geneva II Conference did not bring anything new to the table in terms of reaching a solution. The government’s delegation refused to even discuss the possibility that President Bashar al-Assad would step down and a transitional governing body would be formed. Instead, the delegation focused only on combating terrorism — a topic the regime uses to evade other subjects. The opposition and regime delegations did discuss humanitarian issues and the provision of aid to the besieged areas, but the only ensuing agreement that was ever implemented was the Madaya-Kefraya al-Fua Agreement — and action on that came only recently.

This is the general climate prevailing in Damascus regarding the third Geneva conference amid intensified international efforts to ensure the conference is held on schedule.

Staffan de Mistura, the UN special envoy to Syria, and the US State Department stressed the need for both sides to head to Geneva without setting preconditions for the peace talks, such as a cease-fire, providing humanitarian aid to the besieged regions, the need for another opposition delegation or the regime’s refusal to allow representatives of armed factions in the delegation. Yet what is happening on the ground does not reflect de Mistura's request at all. The peace talks are linked to the execution of UN conventions.

Russia had proposed creating a mixed delegation of representatives of various Syrian opposition factions to be composed of the delegation emanating from the Syria Supreme Commission for Negotiations formed at the Riyadh Conference last month and the delegation determined by Russia.

However, Moscow abandoned that proposal following a Jan. 15 meeting between Gennady M. Gatilov, Russia's deputy minister of foreign affairs, and his US counterpart, where they stressed the need for a third delegation whose members did not participate in the Riyadh conference.

This third delegation would be composed of Syrian opposition members favored by Russia. It would have the same number of members, vested with the same powers, as the Riyadh delegation in the hopes that this conference would not fail like Geneva II, where the opposition delegation was limited to members of the Syrian Coalition.

Media outlets, such as the website all4syria.info, published Jan. 15 the names of the 15 members of the delegation proposed by Moscow, including Qadri Jamil, head of the People's Will Party residing in Russia; Haytham Manna, head of the Qamh Movement; Randa Kassis, leader of the Movement for a Pluralistic Society; Amina Ossi, deputy foreign minister of the Kurdish Democratic Union Party in Syria; Samir Aita, head of the Democratic Platform; and Rim Turkmani, the president of the Madani organization. Turkmani, however, refused to participate.

Turkmani told Al-Monitor, “I completely reject the idea of having two opposition delegations. I refuse to participate in such an assortment. My name was included in these lists to divert attention from the names of other members who are more influential in terms of negotiation. … I have no influence over forces and parties on the ground. To make this clear, I sent a letter to the UN envoy and to the Russians clarifying my desire to stay away from this polarization.”

She told Al-Monitor that the civil society sector should also be represented at the negotiations as an unaffiliated observer.

In line with Turkmani’s position, Aita told all4Syria.info on Jan. 20 that he refuses to be part of an opposition delegation negotiating against another opposition delegation, preferring to avoid any new conflict among the factions. He also cited rumors about the possibility of a fourth delegation representing the civil society sector.

It should be noted that the Supreme Commission refuses the idea of ​​a third delegation and calls on Assad’s regime to take actions proving its good intentions. These actions include implementing the articles of Resolution No. 2254, which was unanimously adopted by the UN Security Council on Dec. 18 and calls for achieving a cease-fire, lifting the siege on Syrian cities and allowing access to humanitarian aid.

Riad Hijab, head of the Supreme Commission and former Syrian prime minister, said at a press conference Jan. 21 in Riyadh, “We cannot negotiate while our people starve to death and suffer shelling by internationally prohibited weapons.”

The Supreme Commission announced Jan. 20 the list of members of the opposition delegation heading to Geneva. Asaad al-Zoghbi, a defected brigadier general of Assad’s regime, was appointed head of the delegation. Alloush, the representative of Jaish al-Islam, was named chief negotiator, which adds to the obstacles hindering the conference.

The Syrian news agency SANA reported Jan. 20 that Russia rejects allowing armed opposition factions to be represented at the Geneva conference. Russian Foreign Minister Sergey Lavrov said that day, in a press conference following his meeting with his US counterpart John Kerry in Zurich, “We still believe the Jaish al-Islam and Ahrar al-Sham movements are terrorist organizations. Jaish al-Islam has bombed residential areas in Damascus more than once.”

A Syrian diplomatic source told the Lebanese newspaper Al-Akhbar, “The Syrian government is serious in its quest to find political solutions to the crisis, but this cannot be disassociated from its determination to fight terrorism. We cannot negotiate with terrorists.”

Disagreements on the upcoming peace talks are not limited to disputes over the makeup of the opposition delegation. Internal disagreements within the Supreme Commission emerged Jan. 5 following the resignation of one of its most prominent members, Louay Hussein, president of the Building the Syrian State political movement, which seeks a democratic civil state in Syria.

Hussein spoke to Al-Monitor about his resignation. “The commission was formed on the basis of partisan quotas rather than through direct election of the members by the Riyadh conference. Each group chose its members in accordance with its special interests. This weakened the Supreme Commission, and my powers in this commission were significantly undermined. Mr. Riad Hijab, the commission coordinator, is issuing statements without referring to us,” he said.

Hussein tacitly voiced his objection to a statement by Hijab in which Hijab expressed condolences to Jaish al-Islam for the killing of its commander, Zahran Alloush.

Regarding the existence of a third opposition delegation, Hussein said, “The opposition should not be represented by two delegations. This will turn [the peace talks] into meetings for the exchange of views and positions.”

He stressed that the regime’s progress in Syria following the intervention of Russian forces affects the overall political process and not only the negotiations, because expectations have long been based on the balance of military forces.

Some opposition forces in Syria denounced their exclusion from the Geneva negotiations. Mahmoud Marai, head of the National Democratic Action Commission, told Al-Monitor, “Geneva II was held with the participation of the National Syrian Coalition only and it was a failure. Any meeting that excludes the various spectra of the opposition inside Syria is bound to fail.”

Majd Niazi, secretary-general of the Syria Homeland Party, denounced the composition of the opposition delegation and mocked it on her Facebook page Jan. 21. Niazi posted, “The chief negotiator of the delegation of the Syrian opposition abroad is Sheikh Mohammad Alloush (may God protect him) and he is a member of the political body of Jaish al-Islam. He will work hard (God willing) to turn Syria into the civil, secular, pluralistic and democratic state we dream of.”

These developments unfold as de Mistura announced that the negotiations may not be starting on schedule on Jan. 25. However, his office is proceeding as if they will and started to make hotel reservations for delegation members.