Syria talk invites go out … who’s in and who’s out? 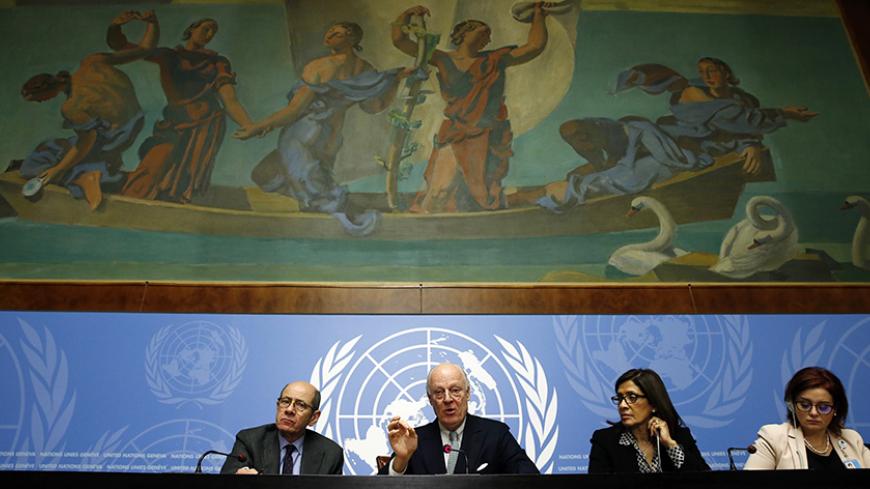 WASHINGTON — United Nations Syria envoy Staffan de Mistura formally issued invitations on Jan. 26, for Syria peace talks that are due to start Jan. 29 in Geneva and last for six months, as the Syrian opposition, meeting in Saudi Arabia, signaled it would seek clarifications on the talks before deciding if it would attend.

In a sign of the tremendous strains on the fragile diplomatic efforts, de Mistura announced that the relaunched peace talks would not, at least initially, have the Syrian government and opposition delegations meeting in the same room, but would have diplomats shuttling between delegations in different rooms. In addition, because agreement could not be reached to include Syrian Kurdish parties, among others in the Syrian opposition delegation, de Mistura issued a third set of invitations to a dozen individuals and groups, as well as women and nongovernmental organization (NGO) figures, that Russia wanted included.

Noting the past failed Geneva II Syria peace effort, which collapsed two years ago, de Mistura said the approach this time would be different — by holding rolling proximity talks over six months and canceling any high-profile opening ceremony.

“This is not Geneva III,” de Mistura told journalists at a press conference at the UN in Geneva Jan. 25. “This is leading to what we hope will be a Geneva success story, if we are able to push it forward.”

“There are political risks,” de Mistura acknowledged. “But those political risks and tensions … should take into account that our line … is clear: no preconditions, at least to start the talks. … The rest is open.”

“It is going to be uphill,” he added.

The agenda for the talks will be on two tracks: governance — “new governance, new constitution and new elections” — and humanitarian, with a focus at the beginning of the talks on trying to get a broad cease-fire and expanding humanitarian aid access in the country, de Mistura said.

Twelve others were invited as consultants and advisers, plus women’s groups and NGOs, Saab said.

US Secretary of State John Kerry said it would become clear soon if the parties backing Bashar al-Assad are serious about a political solution.

“We are going to know very quickly, in a month or two or three, whether these guys are serious,” Kerry told journalists in Laos Jan. 25. “The Russians and Iranians are at the table, and they’ve signed on to a cease-fire, to an election, to a new constitution and to what they call a unity government but everybody else calls a transitional government.”

Regarding reported Syrian opposition complaints that the United States was pressuring them to come to Geneva with no agreed preconditions or a timetable for Assad’s departure, Kerry said the US position had not changed.

“We hope that they will fully understand we support getting a cease-fire, we support getting humanitarian access,” Kerry said. “We’ve said 100,000 times, Assad cannot be part of the long-term future of Syria because you can’t end the war if he is. It’s very simple. Nothing has changed.”

The 20-member International Syria Support Group that Kerry and Russian Foreign Minister Sergey Lavrov helped establish last fall to try to bolster de Mistura’s efforts is tentatively due to meet on Feb. 11 to iron out difficulties that arise in the first days of the Geneva talks, Kerry also said.