UN Syria envoy Staffan de Mistura hopes to hold the first talks between representatives of the Syrian regime and opposition in almost two years in Geneva by the end of January. 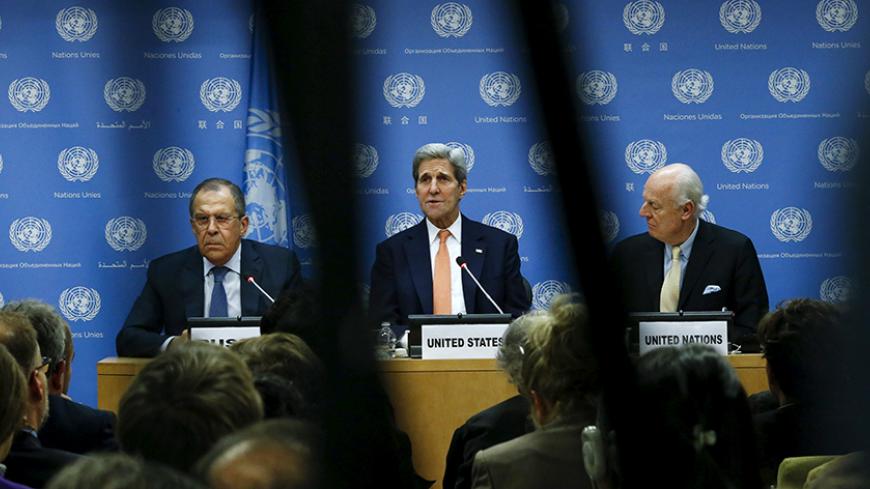 US Secretary of State John Kerry (C) speaks to the media next to Russia's Foreign Minister Sergey Lavrov (L) and Special Envoy of the Secretary-General for Syria Staffan de Mistura during a news conference at the United Nations headquarters in Manhattan, New York, Dec. 18, 2015. - REUTERS/Eduardo Munoz

WASHINGTON — United Nations Syria envoy Staffan de Mistura plans to hold the first talks in almost two years between representatives of the Syrian regime and opposition toward the end of January, a senior UN official said Dec. 22, though he acknowledged the Syria diplomatic process is a “moving target.”

“Almost everybody wants these talks to be successful so that we can finally get a political solution to this really unacceptable problem,” Michael Moller, the director general of the UN office in Geneva, said at a press conference Dec. 22.

“All I can tell you is that the intention is that he [de Mistura] starts here, in the Palais, sometime toward the end of January,” Moller said.

“Mr. de Mistura is … basically living on a plane these days, and every day there are evolutions in how things are being planned and being received by the different parties,” Moller said. “It makes it very, very hard to give you some idea of how this is going to evolve.”

The plans for renewed intra-Syrian talks, to be held at the UN Palais des Nations in Geneva, follows a series of recent meetings by the 20-member International Syria Support Group (ISSG) that have aimed to forge fragile consensus on a diplomatic path forward to end the more than 4½-year-old conflict that has killed over 200,000 people and spurred one of the largest refugee exoduses since World War II.

Those meetings of external powers, including the United States, Russia, Iran, Turkey and Saudi Arabia, culminated in the unanimous adoption by the UN Security Council last week of a resolution endorsing the ISSG’s proposed road map for a Syria political transition process that calls for the writing of a new constitution in six months and new Syrian presidential elections in 18 months. The political track is supposed to be accompanied by a cease-fire that would exclude continued combat against the Islamic State and the al-Qaeda-linked Jabhat al-Nusra front.

“Of course, it’s up to the Syrians, and the Syrian people will be helped if this unity we are seeing today will continue,” he said.

Kerry, who presided over the Dec. 18 UN Security Council meeting on Syria, said the world would observe within a month or two whether the Syria regime was prepared to seriously negotiate or whether its external backers were permitting it to stall.

The resolution “mentions transitional governance,” Kerry said Dec. 18. “And the target for that is within six months. Now, that means that within a month or so, two months, decisions are going to have to start to be made about the devolution of some power and the creation of a unity entity.”

“Now, either that happens true to the word of this, or you begin to see that this isn’t going to work,” Kerry said. “It’s that simple. But you’re not going to wait a year and a half or a year or six months to know that. You will see very quickly whether or not transitioning is beginning to take place. And everybody signed up to that.”

Lavrov, for his part, said he was not very optimistic.

“So I am not too optimistic about what has been achieved today, but a very important step has been made to create the requisite external conditions for Syrians to be able to do what we all expect them to do, and that is get down to agreeing on the issues that will determine the future of their country,” Russia’s top diplomat said at the Dec. 18 press briefing, speaking in Russian with a translator.