You won't believe how Egypt plans to stop January 25 protests

Egyptians are split over a fatwa issued by the Ministry of Religious Endowments banning demonstrations on the fifth anniversary of the January 25 Revolution. 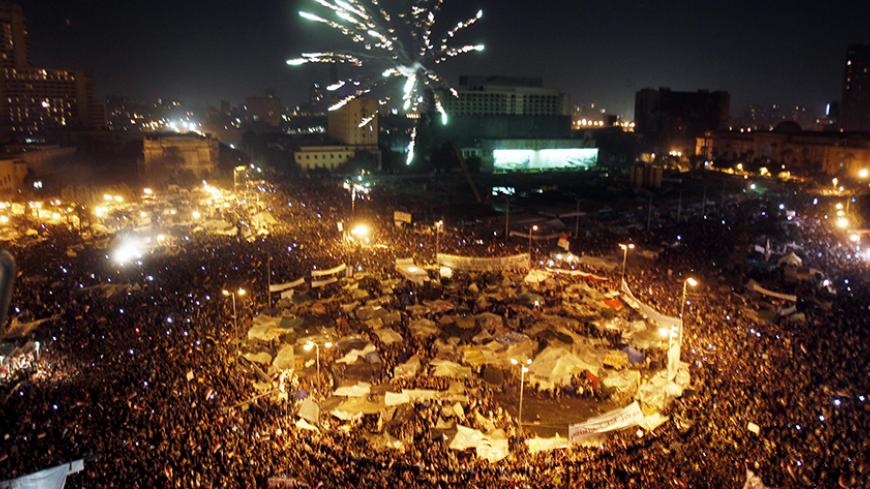 Egypt’s Ministry of Religious Endowments is seeking to ban demonstrations against the regime on the fifth anniversary of the January 25 Revolution, saying they are aimed at “ruining the country.”

When the ministry issued the official sermon for Jan. 8, it included a fatwa accusing those calling for demonstrations of “implicating Egyptians in [acts of] violence and terrorism in favor of the homeland’s enemies.”

Opponents of the government consider the claim erroneous, arguing that the ministry is merely trying to win the regime's favor.

In the distributed sermon, the ministry demanded that people keep in mind the situation in neighboring countries that have plunged into chaos, “so to not forget the great blessings that the Egyptians are enjoying right now, including security, safety and stability.” It also called on the people to unite to build and preserve the homeland, and to consider that a legitimate demand and national duty.

Ahmed Karimeh, a professor at Al-Azhar University, told Al-Monitor, “This fatwa applies to those [protesters] committing crimes, banditry and harassments.”

Karimeh quoted a Quranic verse, saying, “Indeed, the penalty for those who wage war against Allah and His Messenger and strive upon earth [to cause] corruption is none but that they be killed or crucified or that their hands and feet be cut off from opposite sides or that they be exiled from the land,” (Surah Al-Maidah, verse 33).

He added that those participating in the demonstrations against the regime will be viewed as perpetrators of mutiny, which is a breach of public order and security of the state. He stressed that averting harm is an important principle, and said he considers calls for demonstrations harmful.

The fatwa, issued by Minister of Religious Endowments Mohamed Mokhtar Gomaa, does not align with what Gomaa has previously said. In a Sept. 13, 2013, interview following the overthrow of Muslim Brotherhood rule, Gomaa told Asharq Al-Awsat, “Mosques serve as a place for prayer, not politics.”

Later that month, speaking to a youth delegation, Gomaa noted that the ministry had replaced internal leaders who were not affiliated with Al-Azhar, to prevent the mixing of religion and politics.

Yet this fatwa is not the first time the ministry has focused on political affairs. Ahmed al-Tayeb, the grand imam of Al-Azhar, said in a 2011 interview with Egyptian state TV during the January 25 Revolution that the ongoing protests were demonstrations of chaos. He added that participating in them was religiously forbidden, since they were a form of disobedience to the state and the regime. He said that, with the exception of those present in Tahrir Square, the people from Aswan to Alexandria were not satisfied with the protests. Tayeb accused religious scholars who supported the protesters of using religion to achieve their own goals and betraying the religion. He said God would hold them accountable on the day of judgment.

In November 2013, interim President Adly Mansour issued a law on the Right to Public Meetings, Processions and Peaceful Demonstrations. The law requires that authorities be notified at least three working days ahead of any demonstration, and it stipulates that it is up to the interior minister to forbid a protest if it poses a threat to security. The law calls on security officers to escalate their use of force gradually, starting with verbal warnings, followed by firing rubber bullets, using water cannons, batons and tear gas.

Yasser al-Borhamy, vice president of the Salafist Call, concurred with the ministry’s stance. In a Jan. 15 media statement, he said Islamist currents should not respond to calls for demonstrations against the regime on the revolution’s anniversary. He warned against potential calls to carry out vandalism and said any demonstrations on that day will result in bloodshed.

Gamal Farouq, dean of the Faculty of Islamic Preaching at Al-Azhar University, told Al-Monitor that Dar al-Ifta al-Misriyyah is the party commissioned to issue fatwas in Egypt, not the Ministry of Religious Endowments. Still, he said, any fatwa is certainly subject to consideration for the common good. The ministry's fatwa meets that standard, based on how demonstrations in Egypt often turn violent and on the fear that terrorists might infiltrate the demonstrations, he added.

Farouq stressed that Egypt is still in a transitional phase and cannot tolerate any incident that leads to a breach of public order. This is why, according to him, it is religiously permissible to ban anything that is likely to cause harm to the community.