The Salafist Call in Egypt issued a fatwa prohibiting banking interest in a move that could push Egyptians to either keep their money at home or in Islamic banks. 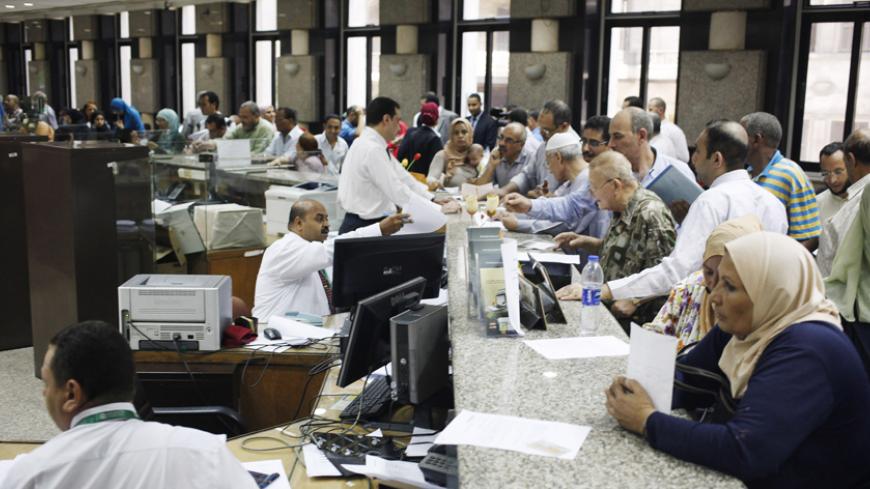 However, the Islamic Research Academy, Dar al-Ifta al-Misriyyah and Al-Azhar officially ruled that the practice is not forbidden. This comes after a number of leaders of the Salafist Call in Egypt opposed the 2014 purchase by Egyptians of new investment certificates in the Suez Canal project, stressing that they represent a form of usury and that the state should have funded the project publicly.

This wave of controversy over banking interest emerged once again following a media debate Jan. 24 between Egypt’s former Grand Mufti Ali Gomaa and prominent figures from the Salafist Call, namely the vice president of the group, Yasser al-Borhamy. The latter accused Gomaa of renouncing his own fatwas prohibiting bank interest in response to Gomaa questioning the Salafist religious doctrine.

The crisis was not confined to the prohibition of banking interest as a form of usury. The Salafist Call also opposed the National Housing Project prepared by the Egyptian government for middle and low-income households. The group issued a Jan. 10 fatwa prohibiting mortgage loans, the type of loans the housing project is mainly funded by.

Moreover, Egypt’s Central Bank had announced in late 2014 a soft measure program providing citizens with housing units by settling their price with installments at an interest rate of 8%.

Gomaa confirmed on his show “Wallah Aalam,” which aired in January on the CBC channel, that modern banking interest is different from usury and that the relationship between individuals and banks is not based on loans, but rather on financing and investment. He added, “The four imams, al-Shafii, Ibn Hanbal, Malik and Abu Hanifah, stated that usury is restricted to gold and silver, while banks deal with money.”

The Salafist Call accused Gomaa of changing his position and legitimizing banking interest after he had once prohibited it in his former duties in Dar al-Ifta. The Salafist group quoted a previous fatwa issued by Gomaa in which he stressed that banking interest is haram.

Ashour stated that the Muslim Brotherhood started the debate about the prohibition or legitimization of all kinds of banking revenues in the 1980s and has kept it alive ever since. “Yet, during the reign of [President] Mohammed Morsi, when the Brotherhood sought a World Bank loan, they changed their mind and legitimized banking interest. Now, the Salafists have the same idea and inclination,” he added.

Ahmad Karimeh, a professor of Islamic jurisprudence at al-Azhar University, criticized Salafists for raising the interest debate to stir confusion among citizens. He told Al-Monitor, “Salafists are not entitled to discuss such matters of jurisprudence, since they lack knowledge and specialization and they are not scholars. This is not subject to discussion and according to scholars, this is an innovative transaction. If banking interest is classified as an investment, it would be permissible, and if it is classified as speculation, it would be halal. In fact, bank deposits fall within the scope of investment and speculation.”

“Loans are forbidden by the Sharia and this is indisputable, since every loan that brings profit is haram,” Karimeh added.

Regarding the government mortgage program based on loans from banks, he said, “There is a doctrinal opinion that applies to every case. Scholars unanimously agree that providing facilities through a loan in return for increasing installments for the citizen to own a real estate property or a car is permissible.”

The spokesman for the Salafist Call, Abdel Moneim El-Shahat, explained the Salafist position toward this fatwa in a phone interview with Al-Monitor. He said that usury is an increase of cash when the repayment of a loan is delayed. According to him, gold and silver were used in the past for transactions and now, they have been replaced by banknotes.

“This refutes the argument saying that banking interest is halal. People do not deal with gold and silver now,” he said.

Shahat recommended the Egyptian government to apply the "Good Loan" system or impose an increase of the real estate finance system instead of imposing an 8% interest rate, in return for simple administrative expenses with respect to the real estate mortgage loan program. He said, “Otherwise, the state must draft agreements similar to those of the Islamic banks, called Musharaka agreements, to ward off suspicion of usury.”

He added, “According to the agreement, a party shall fund the real estate property and a party shall benefit from the same property but not from the funds. The lender shall be treated as having purchased the property for the purpose of reselling it to the borrower. Therefore, the ensuing profit margin after the payment of all installments is not usury.”

The dispute over the Islamic interpretation of banking interest and loans is constantly renewed in Egypt, pushing many Egyptians to save their money at home, while others turn to Islamic banks.