The recent closure of a number of cultural and youth oriented establishments in Egypt came just weeks before the January 25 Revolution anniversary, with the concerned ministries exchanging accusations of being behind the raids and closures. 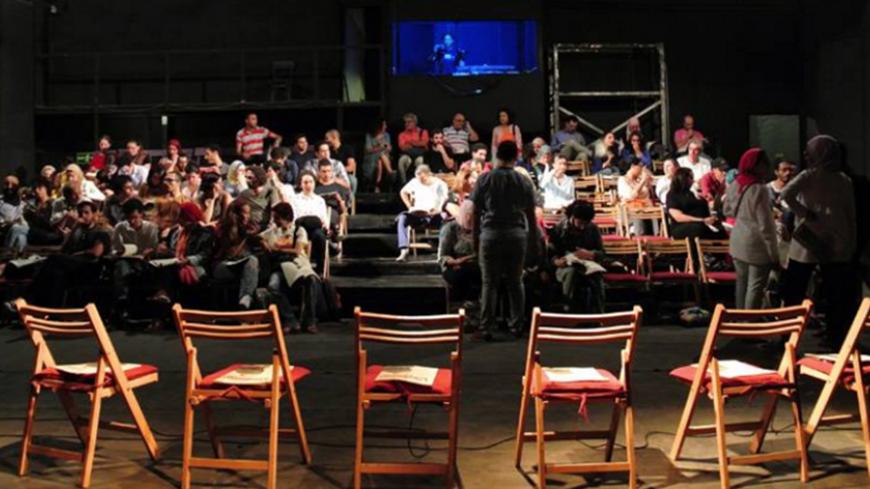 CAIRO — A joint 20-member team composed of agents from the Censorship Authority, the Taxation Authority, National Security Agency and the Ministry of Manpower raided Townhouse Gallery and Rawabet Theater in Cairo on Dec. 28.

As relayed to Al-Monitor by one Townhouse employee who spoke on condition of anonymity, seven individuals in civilian clothes who identified themselves as Censorship Authority agents searched the hall and offices, including personal computers, and asked to see the IDs, official documents and licenses of employees and the gallery, without producing a search warrant. Scores of public officials from various entities flocked to the gallery to continue searching the premises and question employees for approximately three hours, prior to allowing them to leave after making copies of their IDs and confiscating a number of exhibits.

Barely 24 hours after that raid, a security force entered the Merritt Publishing House located near Tahrir Square, arresting an employee there and transferring him to the public prosecutor’s office, which released him the same day, Dec. 29.

But Mohammed Hashem, the founder and director of the Merritt Publishing House, said the Ministry of Culture was not responsible for the raid. In a telephone interview with Al-Monitor, he said he had called the acting head of the Ministry of Culture’s Censorship Authority, Khaled Abduljalil, and asked him whether the ministry had filed a complaint against Merritt Publishing House; Hashem said the ministry denied having done so.

Hashem said he thought the Interior Ministry was trying to muzzle voices prior to the anniversary of the January 25 Revolution in what he called a disquieting security campaign.

Mahmoud Othman, a lawyer at the Association of Freedom of Thought and Expression’s Creative Freedom Program, said that any establishment being investigated has the right to be informed of the reasons and legal justification behind any such probe, as well as to be made aware of the charges leveled against it, which must be clear and concise. He said the raids lacked clear reasons for any searches, and operated under the rationale of “we will use whatever we find.”

Othman told Al-Monitor by phone that, to date, no one knew the principle under which the judicial police were operating, despite the fact that their tasks must be clearly defined by the justice minister. As a result, all independent artists seeming are in jeopardy of facing legal problems.

Othman added that the judicial police exceeded its mandate by failing to produce a legal warrant to search the Townhouse offices.

The Arabic Network for Human Rights Information (ANHRI) condemned the closure of those organizations, saying they were brought about by “the security establishment’s fear.” In a Dec. 29 statement, ANHRI said the raids against the Rawabet Theater and Townhouse Gallery just weeks before the anniversary commemorating the January 25 Revolution “were a sign of said establishment’s fear of allowing a modicum of free expression, particularly among the young and educated.”

The statement added, “The attack came in the context of a campaign waged by security services on other artistic venues and human rights organizations in recent months, for the purpose of suppressing critical voices.”

In addition, the head of the Culture Resource Initiative, Basma al-Husseini, stated that the regime had been conducting similar actions since mid-2014. In a post on Facebook, she noted, “All bans, raids, arrests and closures are based on legal grounds that seemingly have nothing to do with politics, with justification thereto including charges related to artistic, fiscal, workforce, and street management violations. Yet, in every case, those charges were determined to be false and legally unjustified. Furthermore, even if the charges were found to be true, they do not require that arrests be made, or establishments closed, raided and besieged by security forces.”

In that regard, the head of the Egyptian Union for Human Rights Organization, Naguib Gobrail, commented that he stood against the restriction of freedoms, or the closure of any publishing house or media outlet. He told Al-Monitor that the constitution included explicit provisions guaranteeing the freedom of expression, publishing and creativity. In his opinion, what occurred was a step backward that should never have taken place subsequent to the latest duly held elections.

The decision to close and raid cultural venues — which has yet to be formally announced — was met with condemnation from cultural circles. Medhat el-Zahed, head of the Socialist Popular Alliance Party, said such measures were indicative of “an attack against the freedom of opinion and expression.” Journalist Osama al-Rahimi characterized the decision as “a pre-emptive measure that reflected the state’s fear of youth rallies prior to Jan. 25.”

It also should be noted that a number of cultural centers have been closed by order of the Censorship Authority since August 2014.

Activists asked that intellectuals reject the closure decision and express solidarity with the employees of the gallery and theater. Rights lawyer Negad al-Barii wrote on his Facebook page Dec. 29 that “everyone must oppose these measures. ... I also endorse the idea of intellectuals uniting under the banner of an organization similar to the Defense of Freedom and Creativity Front, which was established to protect such rights during the reign of the Muslim Brotherhood.”