Blasphemy trials on the rise in Egypt

Despite calls for reform, lawsuits that infringe on freedom of expression are still being pursued under the concept of "hisbah," an Islamic doctrine involving the promotion of virtue and prevention of vice. 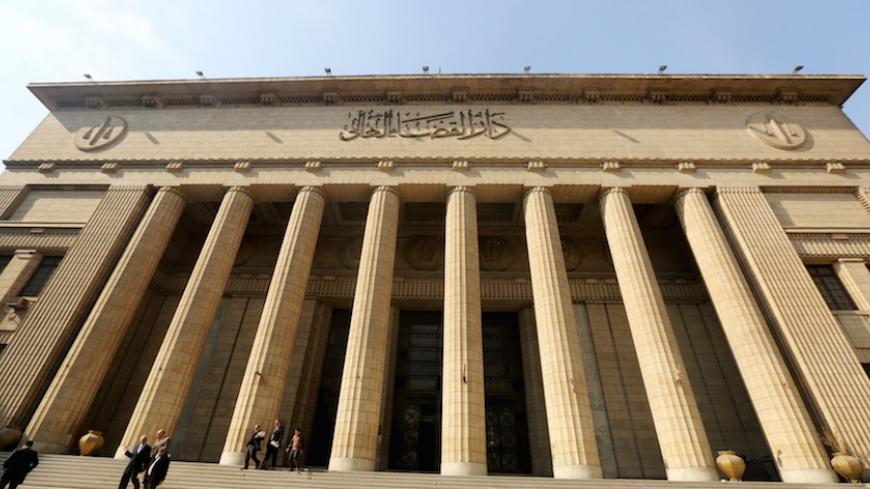 CAIRO — On Jan. 26, an Egyptian court sentenced journalist Fatima Naaot to three years in jail and a fine of 20,000 Egyptian pounds ($2,500) for “defaming religions.” The judgment reflected a “return to hisbah lawsuits, which are a threat to freedom of opinion, expression, thought, belief and human rights,” said a Jan. 27 statement by the Egyptian Organization for Human Rights. Hisbah — meaning "accountability" — is an Islamic doctrine involving the ruler or government's duty to promote what is right and prevent wrong.

Naaot was accused of contempt for Islam and mocking the Islamic al-Adhiya (sacrifices) ritual. She had described the annual Islamic holiday of sacrifice — Eid al-Adha — in an October 2014 Facebook post as “a massacre committed because of the startling nightmare one of the righteous ones had about his son,” in a reference to the story of Abraham in the Quran.

Mahmoud Othman, a legal scholar at the Institution of Freedom of Thought and Expression, said hisbah lawsuits are based on Article 3 of the Code of Procedure, which allows anyone to file a lawsuit against any creative work by an artist, writer or public figure as long as the plaintiff has an interest in it. Also, the lawsuit must be aimed at avoiding imminent damage or at documenting evidence. Such lawsuits are submitted to the public prosecutor, who determines their merit.

Othman told Al-Monitor that hisbah lawsuits violate the Egyptian Constitution, which says, “Freedom of thought and opinion is guaranteed. Every person has the right to express his opinion verbally, in writing, through imagery, or by any other means of expression and publication.” The constitution also states, “Freedom of artistic and literary creativity is guaranteed. The state shall encourage arts and literature, sponsor creative artists and writers, and protect their productions. … No lawsuit may be initiated or filed to stop or confiscate any artistic, literary or intellectual work.”

Pending those amendments, Issa said, “The prosecutor and the judges should apply the constitutional provisions that criminalize punishing all publication and expression cases,” a move he described as “judicial harmonization.” He added, “A judge who looks at such cases should only approve the fine, rather than imprisonment, so as not to conflict with the provisions of the constitution.”

He called on parliament to quickly consider laws that complement the constitution.

A deputy in parliament who spoke on condition of anonymity told Al-Monitor, “Once we finish the Rules of Procedure of Parliament, we will look at all the laws that are incompatible with Egypt's constitution.” He said hisbah lawsuits that punish opinions should be stopped.

Gamal Eid, head of the Arabic Network for Human Rights Information, talked with Al-Monitor about what effect the January 25 Revolution in 2011 had on freedom and on opinion lawsuits. Eid said that before the revolution, some hisbah lawsuits were used mistakenly to defend religion. Most such lawsuits are hypocritical, he said, noting that some people use them in attempts to become famous.

Eid questioned the role of the Egyptian parliament in addressing freedom of opinion and expression.

“Unfortunately, I don’t trust parliament because these lawsuits are aimed at regime critics, and parliament is the regime's parliament," he said. "The solution is having an independent judiciary. … The law requires the prosecution and the judiciary to not consider any lawsuit before making sure of the plaintiff’s status and direct interest. Plaintiffs have no right filing lawsuits involving prison, but they are being accepted in violation of the law."

He concluded, “Whether or not the law is applied depends on how close the defendant is to regime circles.”

The Naaot case was not the first time that a poet, writer or artist has been sentenced in a hisbah lawsuit. The most famous hisbah case in the 20th century was that of Nasr Hamid Abu Zeid, an Egyptian scholar who specialized in Islamic studies. On Aug. 5, 1996, the Egyptian Court of Cassation ruled on the forced separation of Nasr from his wife, Ibtihal Younis. The court ruled that he was an apostate from Islam because of the research he did to obtain a professorship at Cairo University. Since Islamic law forbids marriage between a Muslim woman and a non-Muslim man, Abu Zeid's marriage was nullified. The court had deemed that his research was harmful to the Holy Quran and of scandalous ignorance.

Recently, an Egyptian court sentenced novelist Ahmed Naji to two years in jail on charges of offending public decency and using sexual terms in his novel "Isdikhdam al-Hayat" ("Using Life"). On Feb. 20, the court held that the novel was beyond the scope of literary writing.

On Dec. 29, an Egyptian court sentenced Islam al-Buhairi — Islamic scholar and host of the television show "With Islam al-Buhairi" — to one year in prison after accepting his appeal of a previous ruling sentencing him to five years for contempt of the Islamic religion.

by Murielle KASPRZAK and Joseph SCHMID | AFP | May 26, 2022
END_OF_DOCUMENT_TOKEN_TO_BE_REPLACED