The sentencing of lawyer and Islamic thinker Ahmed Abdo Maher to five years in prison over remarks defaming Islam has sparked controversy in Egypt, accentuating the divide between liberals and ultra-conservatives. 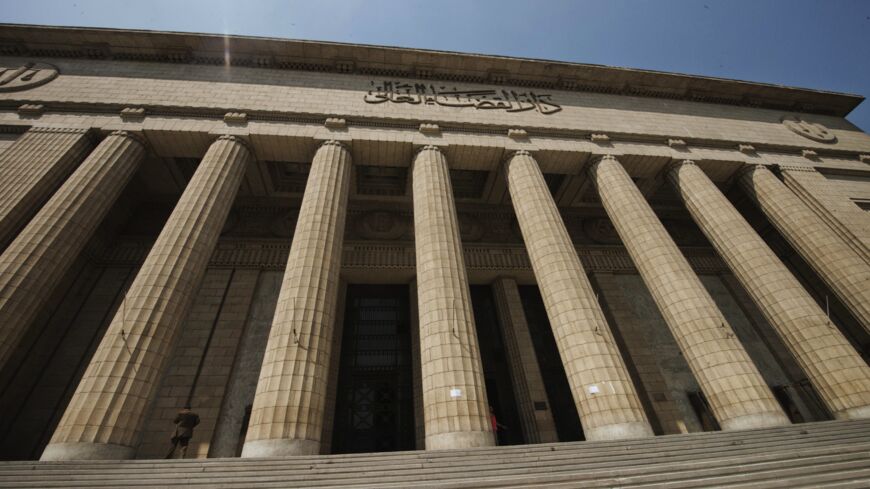 People walk in and out of the Cairo High Court in Egypt on Aug. 25, 2013. - GIANLUIGI GUERCIA/AFP via Getty Images

A prominent Egyptian lawyer and Islamic thinker has been sentenced to five years in prison with hard labor on charges of "contempt of religion" and "stirring up sectarian strife."

The Nov. 17 court decision to imprison Ahmed Abdo Maher over "anti-Islamic" comments posted on his social media accounts and views expressed during an Aug. 26 TV interview sparked controversy on social media, prompting calls by Egypt's liberals for the abolishment of the country's blasphemy laws. In the interview broadcast on El Mayadeen TV, Maher had described the Islamic nation as "static" and without innovation and said that enlightenment requires courage.

The ruling by the Nozha Misdemeanor Court (an emergency state security court) against Maher came after lawyer Samir Sabri filed an urgent legal complaint with the Supreme State Security and the Public Prosecutor against Maher, accusing him of "defaming Islam."

Sabri, notorious for filing lawsuits against religious figures and celebrities, accused Maher of "waging war on Islam" and "inciting Muslims to question their religion." According to Sabri's complaint, Maher had called for "altering the principles of Islam" and urged Al Azhar to apologize for the Islamic raids of the past.

"Maher further attacked Islam by stating that there is no torture for the dead in their graves nor were the (Islamic) holy wars aimed at spreading Islam; rather, those were waged with the aim of enslaving women as Islam was not spread through those conquests," read the complaint.

The plaintiff stated that Maher had attacked Islam by disputing the timing of the annual fasting month of Ramadan. Days before the start of Ramadan, Maher had published a tweet claiming that what the Muslim faithful will observe in a few days "is in fact not Ramadan but a month that Islamic scholars had agreed on designating as the fasting month."

Maher's comments drew a backlash from conservatives, with some calling him "an apostate" and others welcoming his prosecution as "well-deserved."

Liberals, meanwhile, defended him and insisted that his prosecution was "a disgrace" and "an assault on freedom of thought and expression." Some also called for the abolishment of Egypt's blasphemy law, which they said is being used as a tool of oppression and persecution against those who oppose mainstream Islamic beliefs. Others, like poet and writer Fatima Naoot, called on President Abdel Fattah al-Sisi to grant Maher a presidential pardon.

The contentious article penalizing "defamation of religions" with jail sentences of between six months and five years was added to the Penal Code in 1981 following deadly sectarian clashes in the Cairo suburb of Al Zawya El Hamra. At the time, some radical Muslim preachers had used their mosque sermons to insult and incite hatred against Coptic Christians and Shiites.

Ironically, the article — which prohibits "making use of religion in propagating (either by words or in writing or in any other way) extremist ideas for the purpose of inciting (sectarian) strife, ridiculing, or insulting a heavenly religion or a sect following it, or damaging national unity" — has since increasingly targeted the very group it was intended to protect: Coptic Christians.

Around half of the 21 blasphemy cases in the courts in 2015 targeted Coptic Christians, researcher with the Egyptian Initiative for Personal Rights Ishaq Ibrahim has told The Associated Press.

But liberal thinkers also have borne the brunt of those prosecutions. In 2015, prominent TV talk show host Islam El Beheiry was sentenced to one year in prison on blasphemy charges for calling for passages he said supported terrorism to be removed from books of Islamic religious interpretation and for questioning the credibility of some of the sources of Hadith (Prophet Muhammad's sayings).

In 2016, writer Naoot was sentenced to three years in prison and fined 20,000 Egyptian pounds on the charge of contempt of religion over a Facebook post describing the religious tradition of slaughtering sheep during Eid al-Adha as "the greatest massacre committed by human beings."

Ironically, Al Azhar, the very institution that Sisi called upon in June 2016 to lead the reform of Islamic thinking, backs the anti-blasphemy law. Unlike Al Azhar scholars, who agree that a zero-tolerance policy should be adopted vis a vis those that "defame Islam" or dispute its fundamental principles, Amna Nosseir, a former member of parliament and professor of Islamic thought and philosophy at Al Azhar, opposes the law and has called for scrapping the article on contempt of religion, which she describes as "ambiguous" and "elastic."

As a member of parliament in 2016, Nosseir staunchly advocated for the removal of the article, arguing that "it hurts Islam." Her efforts failed in the face of strong opposition from some ultra-conservatives in parliament and instead earned her the nickname "Amna Nosseir the Crucifix" among Salafists who reject religious innovation and adhere to a puritanical form of Islam.

"You can only confront an argument with a counter-argument and an idea or thought with an alternative idea or thought; this is the true spirit of Islam," Nosseir argued. She cited a verse from the Quran addressing Prophet Muhammad, which states that his mission is only to deliver the message, and another verse stating that "people cannot be forced into belief."

Free speech advocates also condemned the sentencing of Maher. "This is unfortunately not an isolated case; we have seen many being prosecuted for what they believe or say under draconian laws that punish those who challenge religious or social establishments," said Amr Magdi, a Human Rights Watch researcher.

"If Sisi were sincere about reforming religion as he said, he should start by dismantling that arsenal of abusive laws that restrict freedom of belief and freedom of expression," Magdi told Al-Monitor.

Maher remains free pending approval of his sentence by Sisi. Whether Sisi gives the green light for the implementation of the court ruling against him remains to be seen, but what is certain is that Maher's indictment is a real test of Sisi's willingness to carry through on his earlier promise of "a religious revolution."