The government of President Mohammed Morsi needs to do more to protect religious freedom in Egypt. 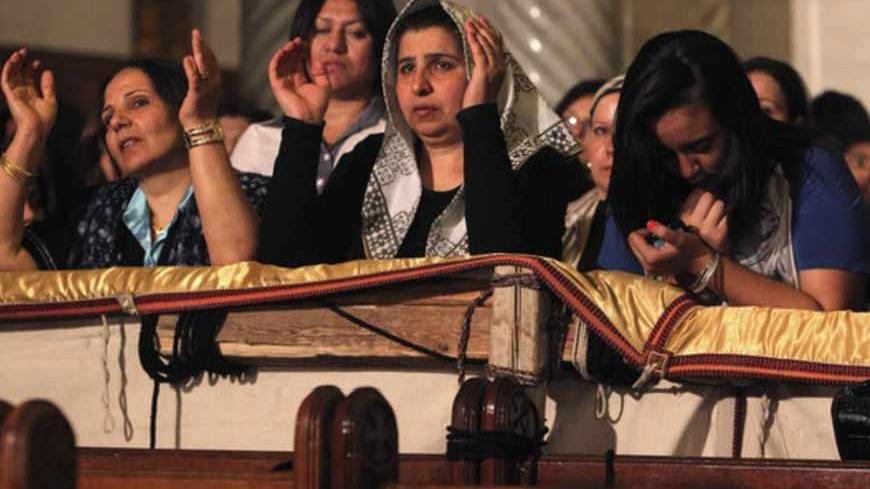 Coptic Christians pray during a Coptic Orthodox Easter mass at the main cathedral in Cairo May 4, 2013. - REUTERS/Asmaa Waguih
June 7, 2013

In June 2012, more than 16 months following the Tahrir Square revolution and the end of Hosni Mubarak’s reign, Egypt went to the polls and elected Muslim Brotherhood candidate Mohammed Morsi as its new president.

For many, this historic election was a hopeful step toward democracy and respect for human rights. Yet today, one year later, hope is flagging amid woeful neglect of pivotal rights, including religious freedom.

Members of the US Commission on Religious Freedom (USCIRF), on which we serve, saw this firsthand in February of this year. Upon arriving in Cairo, our delegation met with the US ambassador, high-level Egyptian officials, human rights defenders, women’s rights advocates, Muslim religious leaders and members of minority religious communities.

During this visit, USCIRF confirmed that Egypt is failing to meet international religious-freedom standards. In our 2013 annual report, released on April 30, we elaborated on our findings.

Among our concerns are Egypt’s new constitution, a code forbidding blasphemy, an impunity problem, restrictions on building places of worship and problems regarding religious identification and conversion.

While Cairo’s constitution affirms “freedom of belief,” it mentions only the right to practice religious “rites” and establish places of worship. It appears to limit even this narrow freedom to Egypt’s three “divine” religions of Islam, Christianity and Judaism, excluding Baha’is, atheists and agnostics, among others.

Egypt’s constitution also backs anti-blasphemy legislation. Explaining this disturbing stance to USCIRF, officials adamantly insisted that there be legal consequences, including prosecution, for insulting people’s beliefs. Egypt already has laws — chief among them Article 98(f) of its penal code — forbidding “contempt” or “defamation” of religion. We have seen more of these cases since the Tahrir revolution, affecting Coptic Christians and Muslims. In July 2012, Mohammed Asfour, a Shiite teacher, was given a one-year jail sentence for “contempt of religion.” Earlier this year, the government charged Bassem Youssef, a Sunni comedian and satirist, with “insulting Islam” on his popular television program.

Besides directly violating religious freedom, such laws fuel Egypt’s impunity problem by provoking hateful attacks against Copts and other religious minorities for alleged blasphemous speech. While the number of casualties has fallen, perpetrators of past violence have gone unpunished.

Too often, it is the government that drives the hatred. Through incendiary rhetoric, state-run media and public officials often stoke the fires of anti-Semitism. Morsi’s recently unearthed 2010 comments urging Egyptians to “nurse our children and grandchildren on hatred” for Jews and Zionists, and another interview in which he labeled Jews the descendants of “apes and pigs” underscore the problem.

Egypt’s government also has a problem regarding the building and maintaining of houses of worship. In 2012, it approved no churches for construction and has since failed to pass a suitable bill enabling Egyptians regardless of religious community to meet their needs in this arena.

Finally, Cairo does injury to religious freedom by the way it ties religion to identity documents. Egyptian-born Muslims who convert to Christianity may not display this change on such documents. Converts to Islam who return to Christianity face similar difficulties. Despite a July 2011 law making it easier to reflect one’s religion on ID cards — and not have to declare oneself a “former Muslim” — obtaining accurate identity cards remains a serious problem. Egypt bars the married members of an entire religious group — the 2,000-member Baha’i community, whose marriages are not officially recognized — from obtaining them and thus from banking, registering for school or owning a car. Baha’is also cannot meet or engage in communal religious activities.

How should the United States, which provides Egypt with billions in aid, respond to these deteriorating religious-freedom conditions?

It should urge the repeal of “contempt-of-religion” laws and discriminatory decrees against religious minorities, the passage of a law for building and repairing places of worship and the removal of religion from identity documents. It should press for prosecution of government-funded clerics, government officials and others who incite violence, while disciplining government-funded clerics who preach hatred. It should keep pressing Egypt to bring the violent to justice. And it should refuse to certify the disbursement of military aid until Egypt shows it is using funds for pro-freedom policies.

The message should be clear: Egypt must do far more to uphold freedom and fulfill the promise of Tahrir Square.

Katrina Lantos Swett serves as chair of the US Commission on International Religious Freedom (USCIRF).